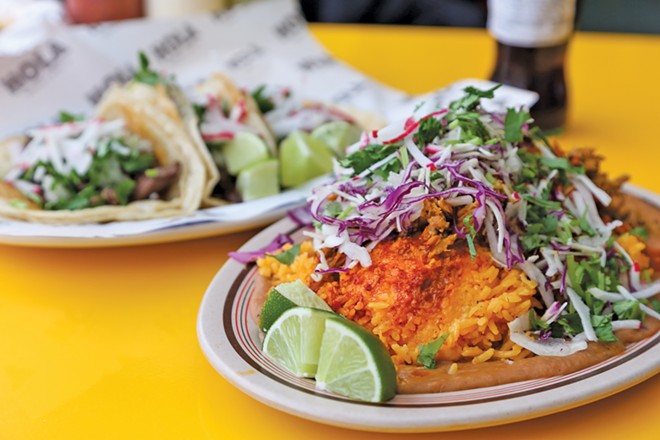 Photo by Emanuel Wallace
Today is the last day of business for Barroco Arepa Bar (12718 Larchmere Blvd., 216-938-9301) off Shaker Square, reports owner Juan Vergara. But Vergara is quick to add that he and the family are not abandoning the neighborhood. In fact, they just renewed the lease and will be opening Hola Tacos at that same property.

“Larchmere is one of my favorite locations,” says Vergara. “It’s as dear to me as my Lakewood store, so I don’t want to leave the neighborhood.”

Vergara says the success of the "L.A.-style Mexican taco stand" in the Birdtown neighborhood of Lakewood that opened last December caught him and his team off guard. What was intended to be a small but delicious diversion has turned into a driving force for the company.

“Hola Tacos (12102 Madison Ave., 216-801-4666) began as a little side project for us and for the neighborhood, but man, it’s become a monster,” he explains. “We did not expect it. People really love their tacos. It’s been very rewarding and now we want to bring it to Larchmere.”

The shop’s success is no surprise to its fans, who crave killer tacos topped with wood-grilled carne asada, al pastor sliced off a twirling trompo and slow-roasted pork carnitas – all gilded with bright, zippy salsas. The menu’s can’t miss dish, however, is the birria de res, tender braised beef tacos griddled in braising juices and served with flavorful consommé.

Vergara is thrilled to be able to enhance and improve the concept thanks to the new, larger location. In addition to having indoor seating, which Lakewood lacks, the Larchmere spot has a large kitchen, also nonexistent out west, that will be used as the commissary for both Hola Tacos locations.

“The space will give us the opportunity to get better, get more consistent and be more creative in kitchen,” Vergara says.

Both locations will employ the same menu, but that menu will likely evolve going forward. The east-side spot also has a liquor license, large bar, front and rear patios and plenty of parking.

Vergara says that he is in the process of securing a new east-side location for Barroco, likely in Willoughby, that will be accessible to a wider clientele. He also pledges that Larchmere has not seen the last of Barroco as future expansion plans include a café and retail marketplace that will offer many of those foods in some form or another.

Tomorrow, the family will begin the process of converting the Barroco space to Hola Tacos, a move that will take approximately two to three weeks, according to Vergara.