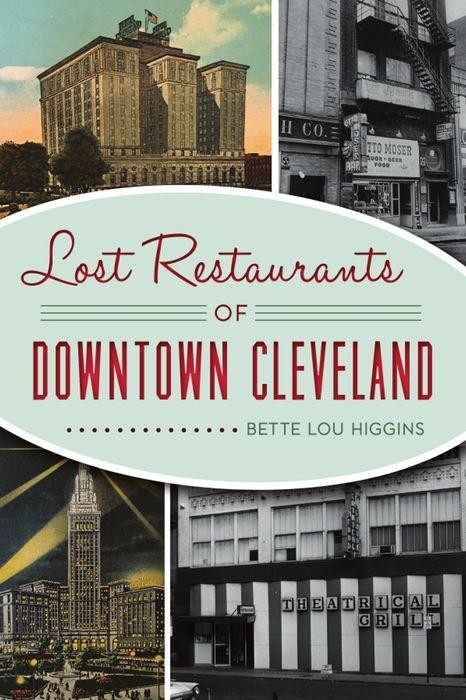 They say to never judge a book by its cover, but to be honest, that’s precisely what I did when a copy of “Lost Restaurants of Downtown Cleveland” landed on my desk. Expecting to find the predictable round-up of dearly departed Cleveland restaurants, accompanied by the same boilerplate descriptions we have read time and again, I was prepared to add the book to my ever-growing stack of review copies.

I cracked the spine more to confirm my assumptions than out of any genuine interest, but within a few short paragraphs I was engrossed. Author Bette Lou Higgins combines a historian’s knack for research with a sociologist’s eye for human behavior to create a captivating portrayal of early Cleveland life. She doesn’t merely describe the food and setting, but rather digs deep into the colorful owners, hosts and maître d'hôtels who drew customers in. Those explorations are joined by a wider look at life as it existed outside the front door.

In the 1880s, according to Higgins, beefsteak dungeons were all the rage throughout the country. There, men would don white butcher’s aprons, sit on whisky barrels and eat grilled steak with their hands. The usual accompaniment was beer and celery stalks. Cleveland’s version was Finley’s Phalansterie and it was located at Huron Road and East 9th street. Opened in the early 1900s by Richard Finley, the eatery was located in a basement that was made to look like a dungeon complete with an imitation cave.

Blue Boar, a chain of Depression-era cafeterias that popped up in Louisville, Memphis and Little Rock, opened locally in 1935. Remarkably, the dining room seated 600 people, who enjoyed dishes like “crusty meat pie," creamed salmon with noodles and eggs, and roast leg of veal, which cost 16 cents. The popular restaurant was located by Taylor’s Department Store, which explains its demise. As people migrated out of urban centers, they increasingly traded in downtown department stores for suburban malls, killing off scores of restaurants that relied on the foot traffic.

Even the familiar fare gets a healthy dose of that Higgins spice. What haven’t we learned about Captain Frank’s Seafood House, which opened on the East 9th Street Pier in 1954. Apparently, the nautically themed restaurant opened without a liquor license because Mayor Anthony Celebrezze believed it would promote a “honky-tonk” atmosphere. Curiously, the owner did finally secure a license after a “mysterious fire” at the former boat depot in 1958.

From modest diners to gilded hotel restaurants, the book covers a lot of ground. If you want to learn more about places like Otto Moser’s, Pewter Mug, New York Spaghetti House, Alpine Village, the Golden Pheasant, the Theatrical Grill and dozens of other notable and obscure joints, order a copy. The author’s descriptions are joined by personal remembrances from diners.

The book, which is published by Arcadia as part of the American Palate series, is to be released on September 27.