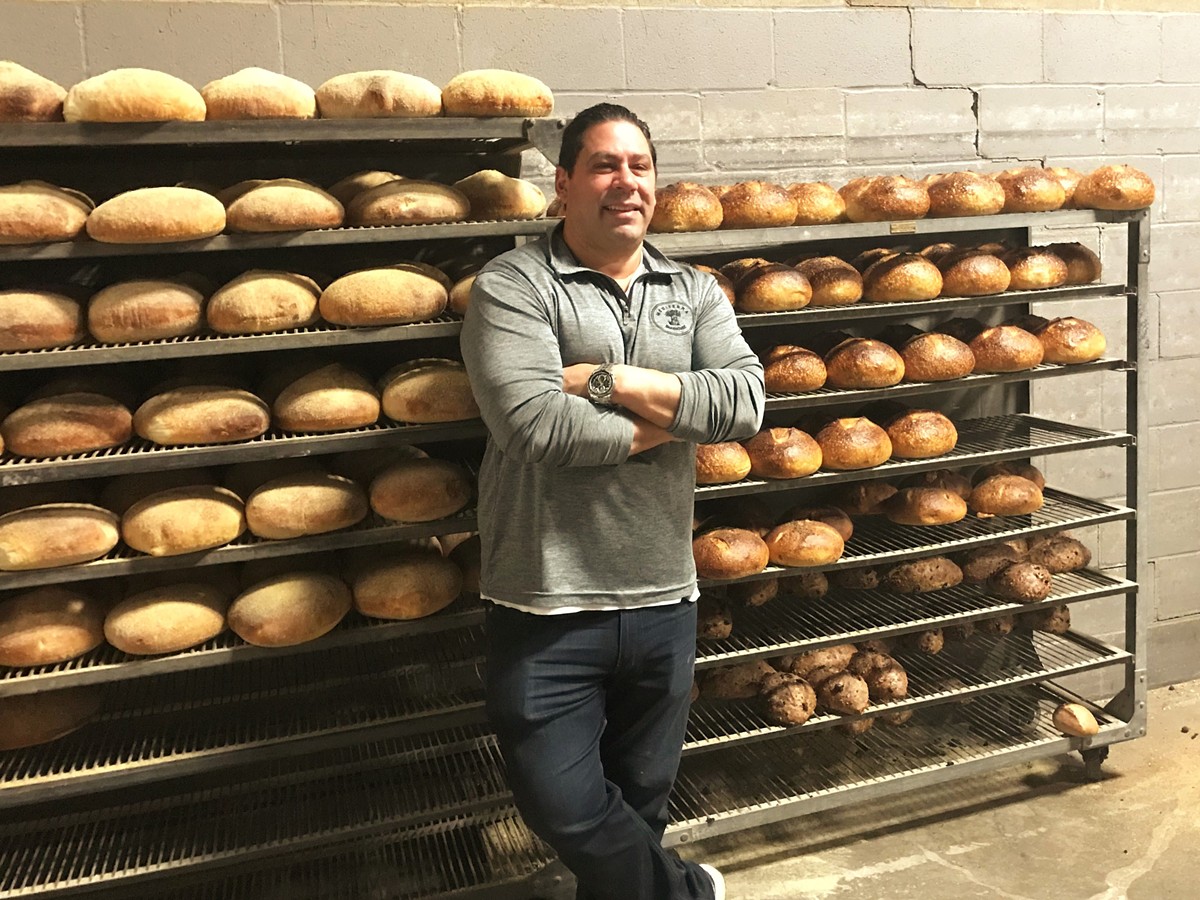 I can't imagine a better place to spend a frigid Pittsburgh morning than inside the Mediterra Bakehouse. Outside, the temperature is fixed at a toe-numbing 15 degrees, but all that discomfort melts away inside the balmy bakery, where the heavenly aroma of baking bread hangs in the humid air. We're met at the door by owner Nick Ambeliotis, a gentle Grecian giant who is eager to show us around.

Like many Clevelanders, I first discovered Mediterra and its exceptional European-style breads through the bakery's retail stand at the West Side Market, which is nearly 10 years old. What I didn't realize at the time was how productive this Pittsburgh-based business actually is. By the looks of the breads — impeccably shaped and baked artisan-style loaves sporting tantalizingly dark crusts — I assumed them to be the work of a lone boulanger toiling away in a cramped and dusty bakeshop. Instead, we stepped into a half-acre-size warehouse absolutely buzzing with activity.

Ambeliotis might live and work in Pittsburgh, but he still considers Cleveland home. He grew up in Warren, Ohio, attended John Carroll University, and maintains season tickets to the Browns. For nearly a decade, he worked for Euro USA, a Cleveland-based importer and distributor of gourmet food products. As buyer, it was Ambeliotis' job to scour Europe for the world's finest cheeses, olive oils, pastas and charcuterie.

"During all my travels I would see all these artisans and I thought, I really want to do something like that," he explains. "I wanted to do cheese, but it's very complicated. I thought, bread is something I can do."

Never mind that he knew nothing at all about baking. Ambeliotis finagled stages at some of the nation's best bread bakeries, including Rock Hill Bakehouse in Saratoga Springs, Zingerman's in Ann Arbor, and Balthazar Bakery's production facility in New Jersey. In 2002, the tenderfoot baker rented 4,000 square feet in an industrial park 10 miles outside of downtown Pittsburgh. His secret weapon: a 10-pound starter from the famous Gérard Mulot bakery in Paris. Today, following 15 years of relentless growth, the bakery has gobbled up 20,000 square feet and maintains a payroll approaching 100-staffers long.

"We've just grown organically, one customer at a time," Ambeliotis modestly says. "Every time we made a little money we bought a piece of equipment. But I don't think we're still really well known because we're wholesale."

Whether you know it or not, you've more than likely enjoyed a Mediterra product. Michael Symon's B Spot restaurants go through approximately 20,000 burger buns per week. Matt Fish buys so much bread for his Melt Bar & Grilled shops — roughly 1,000 loaves per day — that the bakery purchased special equipment just for them. And then there's Whole Foods, which almost exclusively carries breads baked right here at its shops in Ohio, Michigan, Maryland and Virginia.

Ambeliotis says that he never would have gotten this far without the aid of family. His sons Anthony, Mike and Nick Jr. all hold key roles in the company, as does daughter Nicole, her husband, a daughter-in-law and two boys (now men) who the boss "informally adopted" from Guatemala. One, principle baker Juan Russell, is so short that he operates the oven from atop a pallet.

"I struggled before Mike came on because it's hard," Ambeliotis explains. "It's a 24-hour-a-day operation and I'd go home and come back the next day and they don't care, it's just a job. And the ones who are really good, they move on."

On the day of our visit, we watch as a tractor-trailer backs up and off-loads 65,000 pounds of unbleached, unbromated organic King Arthur flour directly into a massive indoor silo. Mediterra gets one of these shipments every five days. Breads are made the Old World way, using very little or no yeast, instead relying on natural starters called a levain. Seven different starters become 30 different doughs, which end up as one of 75 different products, each of which has been slowly fermented, proofed in willow baskets or tucked into French linen, and then cut, weighed and shaped by hand.

"We do a lot of volume, but everything is still done by hand," boasts Ambeliotis. "We do 20,000 loaves a day and every one of them is perfect."

Two enormous hearth ovens, both built onsite by a seventh-generation French company, are the true workhorses of the bakery. Each has about 35,000 pounds of refractory brick inside, which helps to maintain consistent temperatures throughout, even when opening and closing the doors. Out of those ovens come some of the most seductive and satisfying loaves in the country, from light and airy paesanos and uber-tangy San Francisco sourdoughs, to the dark, dense and chewy Mt. Athos Fire bread.

A few years ago, Ambeliotis began spending more and more time in Arizona where he could escape the daily pressures of the job, he explains. But he soon grew listless and bored.

"So I bought a building and started producing and now we're the largest artisan bread baker in Phoenix," he says. "You find something you love to do and you try to get better at it every day. That's all you can do."