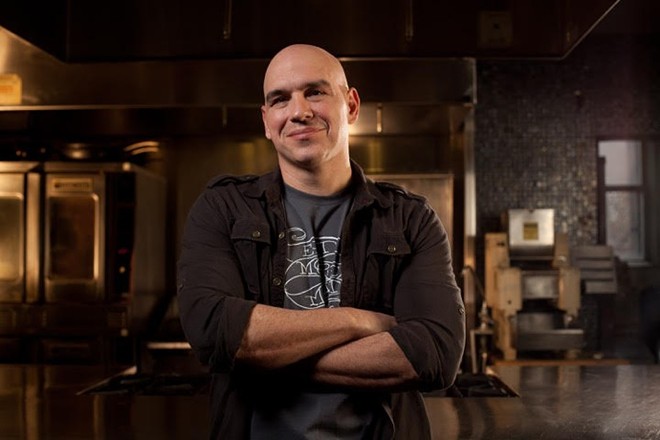 Food Network
Barring unforeseen circumstances, Michael Symon’s flagship restaurant Lola Bistro is closed and will not reopen. The James Beard Award-winning chef announced the news to Scene in an emotional call. While not entirely unexpected, the timing of the closure was propelled by the discovery that two employees recently tested positive for Covid, requiring a temporary shutdown at the least.

“Unless something miraculous happens, they’re closed permanently,” Symon says. “We started looking at the numbers and decided that we just can’t do it.”

Michael and Liz Symon opened Lola in Tremont in 1997, long before Symon was a nationally recognized chef and television personality. There, in the fiery open kitchen, the animated chef whipped up electric dishes like slash-and-burn grouper, herb-crusted walleye with lobster pierogi and long bone beef chop with gorgonzola risotto. Just a year later he would land on the cover of Food & Wine’s Best New Chefs issue, followed by a long string of accolades, not the least of which were high-profile TV gigs like Iron Chef and co-host of “The Chew.”

Symon famously relocated Lola from Tremont to E. Fourth Street in 2006, doing for that neighborhood what he and Liz did for Tremont, which is to say transform it into the epicenter of Cleveland dining and entertainment. Prior to the pandemic, Symon and his partners have long discussed the next phase for the 23-year-old restaurant, perhaps reinventing it for the next decade. But the world had different plans, apparently.

“Lola would have been open 24 years in March,” Symon states. “We’ve had 24 busy, successful years, and we thought that whenever we decided to end it, whenever that was, it would be on our own terms. It wouldn’t have been like this.”

All restaurants – at least the ones that have managed to remain open – are struggling. But keeping open a fine-dining eatery like Lola requires considerable revenue just to break even, revenue that had been drying up for months, says Symon.

“Before this latest surge the restaurant was at about 30-percent of normal sales,” he says. “This last surge cut that level of business in half. We would do more on a busy Saturday than we do in an entire week.”

Symon added that had he and his partners continued to operate Lola, he might not have been able to pay all of its bills, a nonstarter for him.

“We’re at a point now where we can pay all of our purveyors, to pay everyone, but there’s a breaking point where I’m not comfortable staying open and to not be able to keep paying our bills,” he says.

Also closing for good are the B Spot restaurants in Crocker Park and Strongsville. Mabel’s BBQ and B Spot Eton will remain open.

“We came to the conclusion that we could either keep two open and have a chance or keep five open and they all close,” he says.

The most challenging aspect of all of this, says Symon and his colleagues in the restaurant world, is the unknown.

“If someone could tell me that this will all be over, whatever, pick a month, then you plan to make it to there,” he says. “But no one knows. I’m fortunate to be friends with some of the smartest people in the business and nobody has an answer because you don’t know what the future holds.”