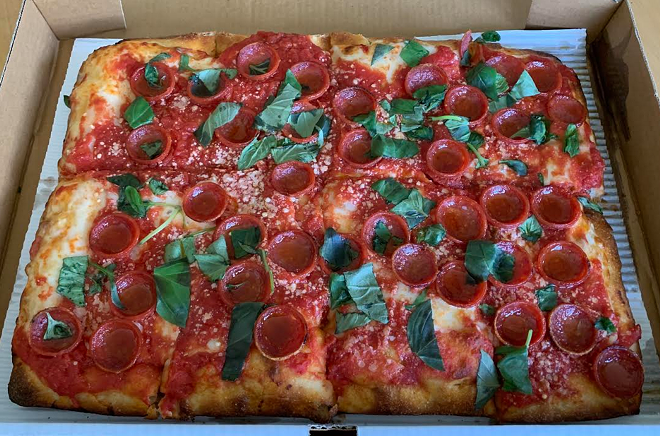 I don’t live anywhere near Bainbridge, so the inside of my car is a hot mess right now. That statement might not make a whole lot of sense until you, too, pick up a few pies from Pizzeria DiLauro, which opened mid-February in that sleepy little Geauga County township. The thought of letting those slices languish in their cardboard crypts for 25 minutes was inconceivable, so I did what any reasonable pizza lover would do: I arrived home a few slices shy of a pie.

If stepping inside Pizzeria DiLauro doesn’t immediately improve one’s mood, it might be time for a vacation. Occupying a prime corner spot in a strip mall, the attractive pizza parlor sports a savvy blend of retro-chic and modern functionality. From the Coca-Cola sponsored black-felt letterboard menu to the classic arcade games, this place feels nostalgic in all the right ways.

Standing at the counter, customers enjoy unobstructed views of the entire pizza-making process, from fabrication to oven-bake to slicing and boxing. Guests also can observe the never-ending flow of foot traffic from those who are ordering, picking up or just poking their heads through the convenient pick-up window to say hi.

You’d think that given the recent proliferation of “pandemic pizza places” it might be a challenging time to break into the slice game, especially in a tight-knit community like Bainbridge. But owners Adam and Tiffany DiLauro have been cultivating a following for three years thanks to a mobile pizza truck of the same name. While that wood-fired oven on wheels focused on Neapolitan-style pies, the immobile pizzeria moved away from those in favor of Sicilian and New York-style pizzas, both of which travel much better.

Those bicycle tire-size New York pies manage to combine the best elements of both the East Coast and Neapolitan products. The bottom crust is sturdy, crisp and foldable, but the cornicione – or outer crust – is pleasantly soft, airy and chewy, even sporting some spots of char. In addition to 18-inch pies, DiLauro offers more “personal” 12-inch versions. Both are available as build-your-own (starting at $12 and $20) or as pre-designed specialty pies. White pizzas tend to be overly rich, cheesy, oily, garlicky and, well, bland, but not here. These are deliciously savory and balanced. And the optional “dollops” of tomato sauce ($1, $3) mean never having to choose between white and red.

DiLauro’s chubby Sicilian style pizza is satisfying in ways that a svelte NY slice can never be. The 12-inch x 16-inch rectangular-cut pan pizza (starting at $20) is capped with ripe, fresh tomato sauce, aged mozzarella and the toppings of one’s choosing. The slightly thick pepperoni slices curl up around the perimeter and fill with tide pools of glorious fat. DiLauro is quick to differentiate his textbook Sicilian pies from the style du jour, Detroit, and the increasingly popular Grandma, both of which feature completely different doughs, proofs and bakes.

In addition to the pizzas, the menu includes fully customizable salads, wings and a mini charcuterie board starring sliced prosciutto, salami, olives, fontinella, assorted pickles and crostini. DiLauro prepares its mouth-watering meatball sandwiches ($11) not in plush hoagies but soft Italian bread, and by slicing the meatballs and layering them with provolone, red sauce and fresh basil, they have made them infinitely easier to eat. The house Italian sandwich ($12) marries flavorful deli meats like prosciutto and salami with the punch of arugula and marinated peppers.

DiLauro does a nice job rounding out the offerings with a few clutch sweet endings. The crunchy-creamy housemade cannoli ($4) is dotted on one end with crushed pistachio and the other with chocolate chips. That agreeable dessert joins gelato, a gelato sundae with candied pecans and an affogato (espresso topped gelato).

When the DiLauros finally arrange the post-Covid dining room, they’ll acquire two dozen seats for grab-and-go customers. But the big change will take place in a couple months. That’s when the pizza parlor will expand into the adjacent space (currently home to Tiffany’s spa), which will feature a full bar and dining room that seats another 24.

“I finish up April 15th over there and I’m pretty sure they’re going to be on the other side of the wall with a sledgehammer waiting,” jokes Tiffany.

Adam says that the response from the community since he and his wife opened the doors has been nothing short of gratifying. In six short weeks, the shop has shot to the top of speed-dial lists throughout the neighborhood – and that ringing phone is music to Adam’s ears.

“I opened this as my playground,” says DiLauro. “I never even thought about making money, I just want to make pizza.”