Platform Beer to Open Brewery and Taproom in Columbus 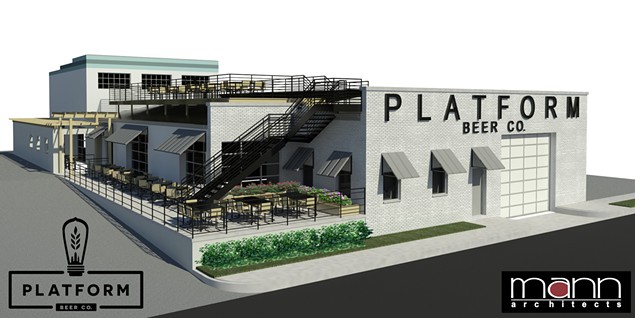 Despite launching a short 18 months ago, Platform Beer Co. continues to grow and expand its operations at an astonishing pace. The Ohio City-based brewery owned by Justin Carson and Paul Benner debuted with a wee 3-barrel system in the summer of 2014. Six months later the team upgraded to its current 10-barrel system, supported by a battery of new 15-barrel fermentation and conditioning tanks. The team took a major leap forward when they purchased the former Leisy Brewery, a 120,000-square-foot complex that already is cranking out a tremendous quantity of beer in cans and kegs.

Paul Benner, left, and Justin Carson
Up until now, all that beer has been going to quench the thirst of the Greater Cleveland market. But with seven shiny new 120-barrel tanks already on route to the Cleveland production brewery, Platform soon will have the bandwidth to serve a larger market, and the next logical market, the owners say, is Columbus.

But rather than simply truck their product two hours south on I-71 a few times per week, the Platform guys wanted to build a more permanent home base. To that end they just closed on a building near the Convention Center, an 11,000-square-foot structure at 408 N. Sixth Street, which was the former site of the Carfagna production facility. That property will have a small brewery and taproom, while also serving as the storage and distribution center for its Cleveland-brewed beer.

“It’s an opportunity to be in the local market and understand the local market and to have a brick-and-mortar facility to relate with the market,” explains Carson. “Our intention from the very beginning has been to create a platform that doesn’t exist in the brewing industry by connecting and collaborating, whether that’s with retail outlets or homebrewers. That has a lot to do with why we want to be a member of the community and not just someone that’s sending beer down from Cleveland.”

Next week, renovations will commence on the Columbus property, with a targeted launch of the local distribution enterprise to coincide with Columbus Craft Beer Week in mid-May. Soon after, Platform beers like Speed Merchant, New Cleveland Palesner and Red Cup will begin appearing in area Whole Foods, Giant Eagle and Trader Joe’s, as well as bars and restaurants. Later this summer, the taproom will open.

“We’re doing it right,” says Benner. “It will be the same concept as Platform here, an open-air space with no walls and a big patio.” In Ohio City, the taproom, brewery and tank farm are one contiguous, open space. “Because of its previous use as an Italian foods company, the space is perfect. There are floor drains, upgraded utilities and three large walk-in coolers.”

The brewery will inherit Platform’s original 3-barrel brewhouse, along with four 7-barrel fermentation tanks. There will be 12 to 20 beers on tap and the taproom will accommodate roughly 150 guests.

Already, a local sales team of four to six employees is being assembled to manage the ground operation. As a self-distributing brewery, Platform employs its own team of salespeople and drivers. The team will be comprised of Columbus residents, but also longtime Cleveland-based employees.

“I think it’s really cool to know that the sales guys are our employees, who feel like it is as much their business as it is our business,” explains Carson. “We really care about customer service, so to know that those people are out on the street pitching our product – that’s why we continue to self-distribute.”

For its launch in Columbus, Platform will invite a few advanced local homebrewers to come in and brew at Platform, each beer getting a name, design and proper debut at the taproom. Platform will select the best of the three to release in cans into the marketplace as part of a pro-am series.

Benner and Carson are bullish both on Columbus as a city and as a market for their beer. And while not necessarily a commonplace brand in the minds of every local craft beer drinker, Platform isn’t starting from scratch either.

“I think the beer scene is growing a lot, and it’s a market that’s growing in population,” Carson says. “And the times we’ve been down there we’ve been surprised by how many people see a hat or shirt that we’re wearing and say, ‘Oh, you’re from Platform.’ For us, that’s extremely humbling because at the end of the day we’re only a little over 18 months old and we still remember the day we opened on our little 3-barrel system with no real idea what we were getting into. And now to this. It’s exciting.”