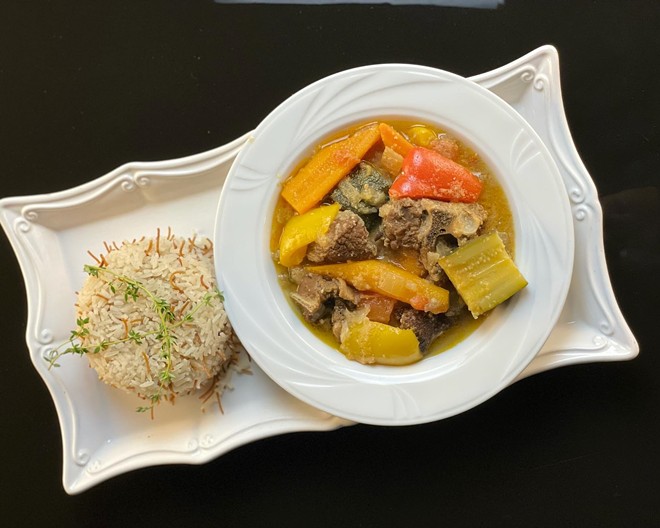 For the past year, the former 2nd and High space has been undergoing a pretty extensive makeover. Two weeks ago, the doors opened to the public for the first time in approximately two years when Primo African Quisine (2123 E. 2nd St., 216-400-6207) debuted. The restaurant is a showcase for West African foods, making it a rarity in Northeast Ohio.

“This is the first West African restaurant downtown,” says co-owner Prince Marouane. “There are a lot of Africans in Cleveland and before, most of them have been going to Columbus to get some African food.”

Marouane says he and his partners were attracted to the property because its location. While tucked away on a back alley, the restaurant is steps from Progressive Field, Rocket Mortgage Field House, Jack Casino and East 4th Street.

“This is a prime location, and people want to try something different,” he adds.

Marouane, who hails from Benin in West Africa, says that the goal is to faithfully recreate the foods of his homeland.

“We try and stay authentic to our dishes,” he explains. “We aren’t trying to compete with American food. Even if some dishes look American, our seasonings are completely different.”

He points out dishes like Nigerian egusi soup, thickened with melon seeds, and peanut soup. Thiep, “the national dish of Senegal,” consists of fish, rice and vegetables. The seasoned red snapper already is a popular menu item, he notes, and there’s a street food version of spaghetti called diallo that comes topped with an omelet. Of course, there’s plenty of waakye, jollof rice and fufu.

The restaurant seats 85 guests and has a full bar and wine list. For now, Primo is dinner-only, but plans call for adding lunch service down the road.