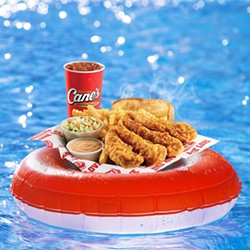 Photo via RaisingCane's/Facebook
Update: Northeast Ohio is closer to getting its first Raising Cane's Chicken Fingers, after the Strongsville City Council unanimously approved the rezoning of the 1-acre plot of land marked for the restaurant's construction last week.

Now changed from a general business district to a restaurant-recreational services district, Raising Cane's would be allowed to build on the property sitting at the corner of Pearl Road and Pierce Drive, Cleveland.com reports.

The city had previously pushed back the rezoning decision in July (see below).

Wednesday, the city of Strongsville acknowledged on Facebook that a developer has asked to rezone a vacant parcel of land on Pearl Road from general business to restaurant/recreational services. The developer wants to build a Raising Cane's on the property.

While there are Raising Cane's restaurants currently in Cincinnati, Dayton and Columbus, this would be the Louisiana fast food chain's first location in the Cleveland area.

But all you chicken lovers will have to wait, as the city won't make a decision on the rezoning until late summer or fall.

Here's what the city of Strongsville had to say in full: