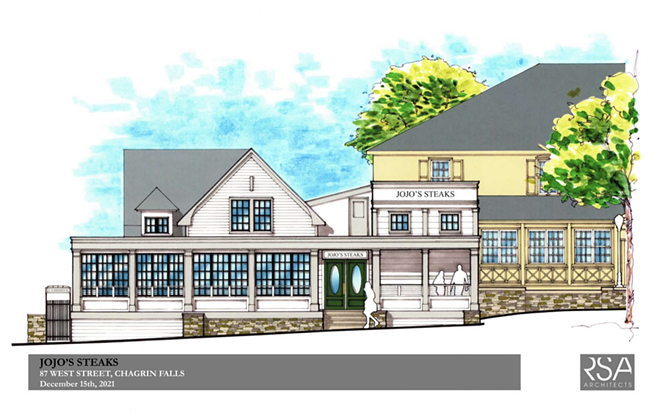 If your name is Rick Doody, your to-do list looks a little something like this: Complete the work of converting Lindey’s Lake House in Beachwood to Bar Italia, completely remodel Lindey’s Lake House in the Flats before peak season rolls around, and put the finishing touches on the dazzling terraced patio overlooking the falls at 17 River, all while managing the day-to-day operations of the brand-new Bar Italia in Lakewood and the nearly 10-year-old Cedar Creek Grille in Beachwood.

Is there room for more on Doody’s plate? You bet.

Next up is the work of converting Bull & Bird Steakhouse (87 West St.) in Chagrin Falls to a new concept, tentatively called JoJo's Steaks. Bull & Bird, if you’ll recall, opened in the former Gamekeeper’s Tavern spot in 2018. The owners, Hyde Park Restaurant Group, closed the restaurant along with everybody else in March of 2020 and never reopened it.

As attractive as that clubby steakhouse was, Doody says that the plans call for significant interior and exterior work. His company, NCR Ventures, just received city approval and commenced construction. While behind schedule, the goal is to open the doors while it’s still patio season.

For three or four months out of the year (weather permitting), there will be an alfresco operation on the picturesque rear patio. The heart of the operation will be the Argentine parrilla, or wood-burning grill. Indoors will remain some sort of chophouse, but with a broader menu.

Much of the delay comes as a result of the ambitious architectural requests. The team plans not only to gut the interior and start over, but also to blow out the façade of the building to enlarge the pocket-size bar.

“The bar was always the issue because it was too small,” says Doody. “We’re opening up the whole front of the building and expanding it.”