Slyman's and Dynomite Evolve and Grow into Exciting New Locations 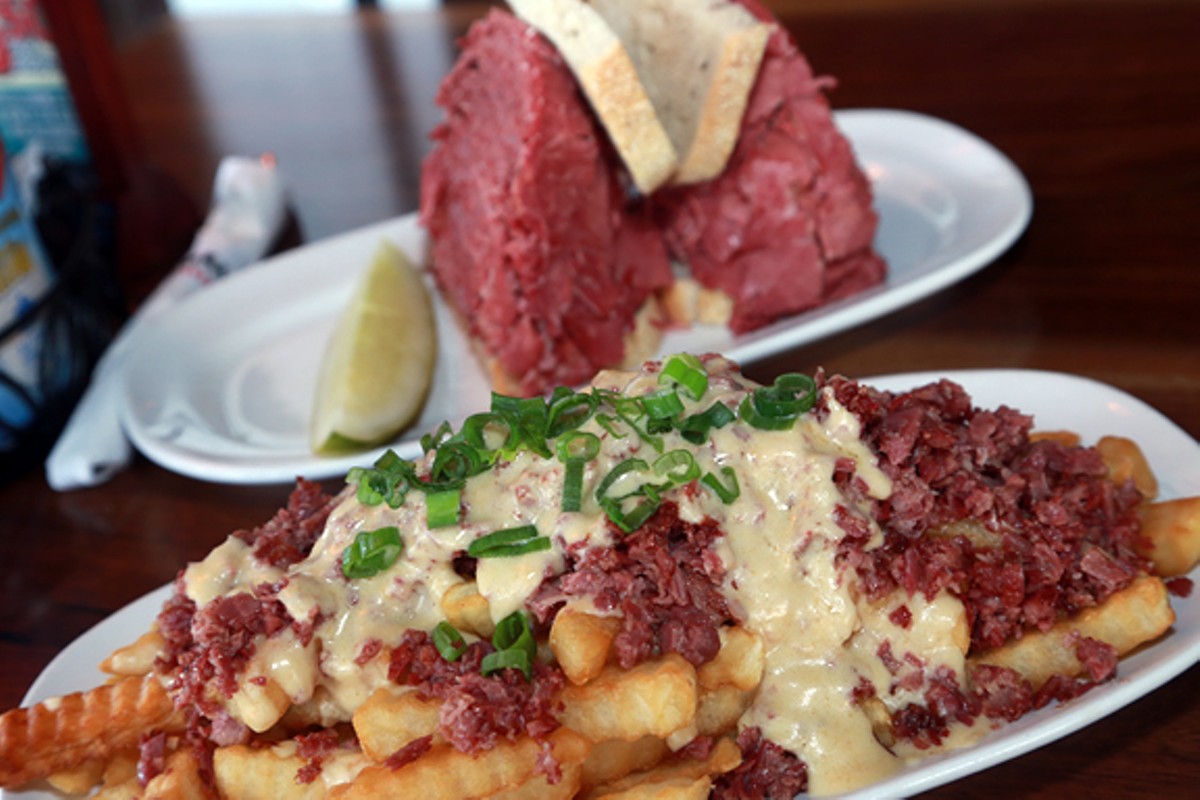 It's impossible to improve upon a Slyman's corned beef sandwich, long the king of the category in a town full to the rafters with worthy subjects. Same goes for Dynomite burgers, the two-fisted beef bombs conceived and dispensed by mega-operator Zack Bruell. But two new restaurants prove that even the best concepts can be improved upon if we use a little imagination.

It's been two years since Bruell transformed an overlooked kiosk in the heart of Playhouse Square into Dynomite Burgers, the chef's take on the wildly popular Shake Shack concept out of New York. Like that model, Cleveland's version succeeded thanks to a straightforward game plan that sticks to gourmet burgers, dogs, fries and shakes. The beer and wine kicker is a nice bonus.

But Dynomite downtown, owing to its alfresco address, is closed for a good chunk of the year. And when it is open, the seating is limited to whatever you can find in the plaza. Oh, and if it's raining, you're pretty well screwed.

That's why we're already big fans of Dynomite Uptown, which opened this spring in University Circle. Set in the home of the short-lived Beer Cellars, the bustling restaurant offers plenty of seating — both indoors and out. It also is full-serve, meaning staffers do all the standing around while diners focus on kicking back with friends and an adult beverage.

If those were the only enhancements we'd be tickled, but they only scratch the surface. The most dramatic improvement comes by way of the menu, a roster that nearly doubled in size thanks to a larger kitchen than at the original. Parallax fans will appreciate the new sushi section, an unfussy selection of popular twist-ups like the salmon-avocado roll ($8.50) and the Dragon Roll ($12), made with tempura shrimp and crab salad, as well as a trim assortment of nigiri.

Also greatly upgraded is the drinks section, which jumps from a handful of beer and wine choices downtown to a full-bar menu uptown. Beer drinkers have their pick from roughly 25 well-chosen options, including eight draft crafts. Wine by the glass pours soar to 14, with a nice selection of sushi-friendly bubbles, rose and whites, and burger-appropriate reds. Cocktails and even sake are now part of the mix.

When it comes to the American side of the menu, the new eatery stays true to its roots, with the same gathering of juicy burgers ($8-$10) in soft buns named after each and every one of Bruell's countless restaurants.

As for Slyman's, the only way we can think of to improve a Slyman's corned beef sandwich is to pair it with a nice Irish ale. That's now possible thanks to the brand new Slyman's Tavern in Independence. That it took 50 years for that to happen is a lamentable stretch of Cleveland history.

If you married the original Slyman's with a sports bar, this is pretty much what would come out the other end. A large bar, a sea of flat-screen TVs and seating for 150 guests immediately sets this spot apart from the small, frenetic deli near downtown. But the sandwiches, those melt-in-your-mouth mountains of tender shaved beef on butter-soft rye, are a dead ringer for the ones we grew up struggling to finish.

Here the pace is slower, with diners encouraged to kick back, have a drink, an appetizer, maybe stick around to see how the Tribe game comes out. A fold-away wall and ceiling of glass open up on nice days, transforming an indoor space into an outdoor one. It's a great spot to enjoy a pub snack like the Slyman's Fries ($8.99), a Cleveland-style poutine with crispy crinkle-cut fries gilded with chip-chopped corned beef, melted Swiss cheese sauce and green onions. It's as good as it sounds. Another starter piles that beef and Swiss atop crispy potato latkes ($8.99).

If you can pry your mitts off the dreamy corned beef sandwiches, which are available in full- and light-meat versions ($13.99/$9.99), consider the pastrami. The smoky, peppery, fat-ringed folds of beef ($13.99/$9.99) have loads more flavor than their deli counter counterpart. Even better, order the pastrami Reuben ($15.49/$11.49) and that beef will come on butter-griddled bread with melted Swiss and kraut. On the lighter side is the popular Tavern Club ($12.99), a layered stack of smoked turkey, bacon, cheese, lettuce, tomato and mayo.

There's a decent selection of beers by the bottle, but the 16 tap handles are largely wasted on mega brews save for a lone Great Lakes. There's a handful of passable wines by the glass and bottle too, if that's what you're into. My suggestion is to nab a pint of the Smithwick's ($4), grab a fistful of sandwich, and praise the progress that made that pairing possible.