The Cleveland Dining Trends of 2022 That We Love and Hate 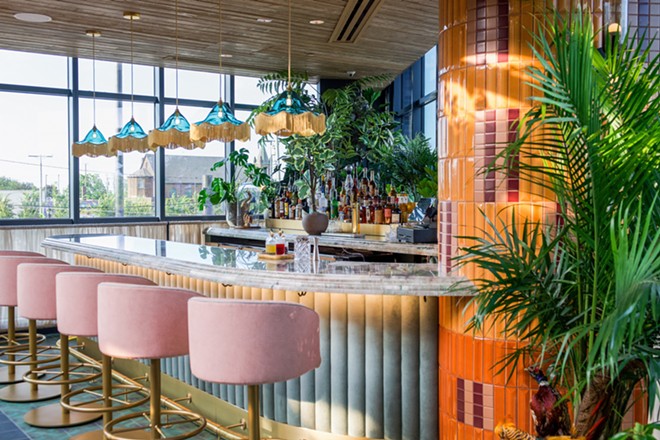 For a decade now, we’ve been looking back at year’s end to examine the trends – good, bad and debatable – that have taken root on the local dining scene. Previous years have seen the upswell of “Disposable Everything” and the blessed decline of Mason jar glassware and sheet pan plates. We’ve prayed for more great barbecue and lamented the proliferation of seafood-in-a-bag joints. Without further ado, here's what's on our mind this year.

Buy: A Real New York Slice
Last year was a zero-sum game for New York-style slice lovers in Cleveland. On the one hand, we lost 40-year-old legend Vincenza’s Pizza downtown. On the other, we gained City Slice Pizzeria, which is selling immense and immensely delicious pizza by the slice on the west side. While Cleveland has a small handful of solid New York-style pizzerias, we have precious few slice shops.

Buy: Blowing the Budget on Design
If, like us, you were growing bored of the spare, clean, monochromatic restaurant design that dominated the marketplace the last few years – we’re looking at you, white subway tile – 2022 arrived like a technicolor dream. At places like Jaja, Cordelia, Bartleby, Amba, Filter, Bright Side, Juneberry and Edda Coffee, guests are immersed in a visually appealing and intentional environment that sets the mood.

Hold: Smash Burgers
Not long ago, every burger arrived with an egg on it, a peculiar trend mentioned in the very column. These days, every burger is actually two burgers, smashed thin as doilies and topped with cheese, pickles, lettuce and special sauce. It’s not that we don’t love smash burgers, it’s that we value variety a little bit more.

Buy: Cajun/Creole
There was no better crawfish etouffee north of Lake Pontchartrain than the brew dished up at Battiste & Dupree Cajun Grill in South Euclid. Sadly, we lost that peculiar gem in 2022 and what’s left in its wake is a sparsely populated field that leaves diners wanting more. If we can have 100 taco joints, surely we can muster a few places that make killer gumbo, shrimp Creole, jambalaya, barbecue shrimp, etouffee and all the other deeply flavorful foods of that cuisine.

Hold: Breakfast Bonanza
Covid ushered in an entirely new way of working for many people, one that tolerates remote working and increased flexibility. Coinciding with this new framework is an upswell of gourmet breakfast places that cater to those folks. We have been absolutely digging places like Juneberry Table, Cleveland Breakfast Club, Sleepy Rooster, Martha on the Fly and The Spot on Lakeshore.

Buy: Breakfast/Brunch Reservations
As much as we love dining at the aforementioned breakfast places, not to mention our favorite bustling diners, we loathe uncertainty. Getting up and out on weekends is hard enough, but when you toss in the likelihood of a long wait on the other end it approaches unbearable. Some higher-end brunch places accept reservations, a trend we’d love to see more widely adopted.

Buy: Food Halls
Food Halls have a permanent spot on these yearly wish lists because, well, Cleveland sucks when it comes to food halls. The one dedicated food hall we had flamed out after a couple years, leaving the wonderful but lonely Market Hall at Van Aken District. We are eagerly awaiting the arrival of a new Asiatown food hall from restaurateur Sheng Long Yu, but the lack of other options is depressing.

Hold: Bakeries
It’s been a glorious year for carb and sweets lovers. Over the past 12 months or so we’ve watched ambitious and homespun bakeshops open their doors, instantly improving the neighborhoods around them. Floressa Café added a spark to Clark-Fulton, Sophie la Gourmande gave Cleveland Heights a tasty boost, and Larchmere got the perfect corner bakery in Honey Birch. Soon, Lakewood will welcome Gray House Pies and U.K. Pies.

Hold: Small Plates
Small plates have made an enduring presence on this list for a decade. It’s been a long-fought battle but Clevelanders, at long last, appear to have embraced the trend. Some of the toughest tables to nab in town are at joints like Amba, Zhug, Salt, Bar Oni, Last Page and The Pompadour, places that traffic in small plates. Recently, Umami in Chagrin Falls converted to the small-plate focused Reserve and others are following suit. Take a bow, Cleveland.

Buy: N/A Bevvies
These days, countless guests are abstaining from booze for any number of reasons, such as being pregnant, taking medication, accepting the DD role, in recovery or simply sitting this round out. Fortunately, today’s N/A options go well beyond O’Douls, water or soft drinks. Many Cleveland bars and restaurants have begun to offer great-tasting low-alcohol or N/A beers and cocktails. Hopefully, more will follow.

Sell: Taco Joints
The bad news: Condado Tacos plans to open 100 restaurants by 2026. The good news: They’re not all bound for Cleveland. If you haven’t noticed, there’s been a proliferation of taco restaurants in Northeast Ohio with names too numerous to list here. Many offer fantastic products. Others do not. If you believe that Cleveland needs any more taco joints, you are firmly in the minority.

Hold (Dearly): Cleveland Classics
In 2022, we went out of our way to highlight some neighborhood restaurants that have stood the test of time. Titled “Cleveland Classics,” the ongoing series chronicled visits to Le Petit Triangle, Big Al’s Diner, Scotti’s Italian Eatery, Marie’s and the chicken houses of Barberton. If there’s one thing we learned in recent years, it’s that no restaurant is safe from disappearing, so visit your favorites while you still can.