Chef Chris Wolf will open the 'modern brasserie' in January 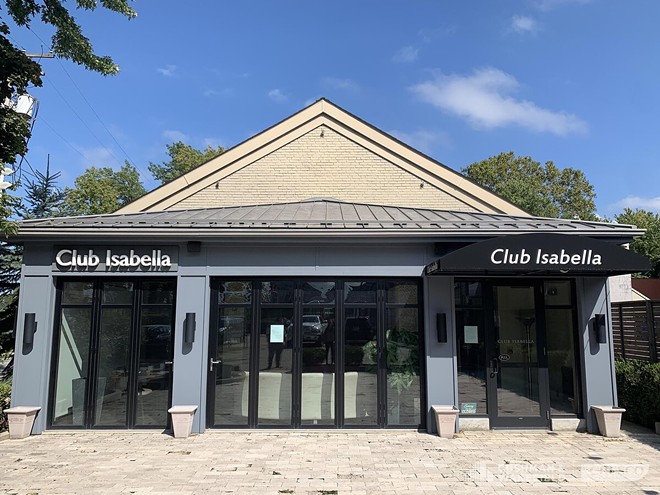 Cushman & Wakefield
The former Club Isabella property has been claimed.
The new Club Isabella in Little Italy, which replaced the original restaurant of the same name in University Circle, chugged along for roughly 10 years before quietly closing a year ago. Since then, the attractive property has been on the wish list of numerous chefs and operators, who have been kicking the tires in hopes of inking a deal.

In the end it was chef Chris and Katie Wolf who came out on top.

“We kind of just snuck in there,” he says. “I know a lot of other people have been looking at that spot. I think out of sheer luck we happened to come up with it.”

Before opening in 2011, the 5,000-square-foot property (2175 Cornell Rd.) at the intersection of Cornell and Random roads received a top-to-bottom makeover that transformed the old carriage house into a sharp, contemporary restaurant. The open-concept bar and dining room connects to the front patio via a wall of disappearing windows.

Following a few additional cosmetic tweaks and updates, Wolf will open Wolf Pack Chorus, which he hopes will hit the sweet spot between neighborhood trattoria and upscale special-occasion restaurant. He’s calling it a “modern brasserie.”

“We are taking a space that already has great bones, that was once a ‘go-to’ dining destination in Cleveland, and we’re giving it new life – with an electric yet elegant feel, approachable menu, recognizable favorites, and a high standard of service,” the chef explains.

The majority of Wolf’s experience has taken place in the kitchens of posh country clubs and resorts, a background that makes him uniquely positioned to satisfy large swaths of diners, he feels.

“Coming from a country club background, we are doing food for everybody and we’re doing it every single day, from chicken fingers to moules-frites,” Wolf explains. “We want to bring that country club feeling to everybody. We don’t want to say we’re a French bistro, we don’t want to say we’re Italian, I’m not necessarily trained in Indian cuisine, but we do do all of these things and do them pretty well.”

The final layout will have seating for 18 at the bar, about 100 in the dining room and another 35 on the patio. Wolf hopes to tap into the lunch business that is fueled by the thousands of medical, university and cultural institution employees who work in University Circle every day. He also hopes to strike gold with his colleagues in the hospitality industry by rolling out Monday brunch on the day that most eateries are closed.

The goal is to open on January 21.