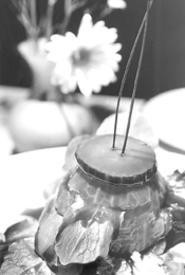 Walter Novak
It's all in the presentation: Prettily prepared pan-seared sea scallops.
Just when you think the Cleveland-area dining scene is getting too full of itself, along comes a place like Weia Teia, a funky little restaurant inside Great Northern Mall whose motto could well be "We have fun with food."

This is owner Jia Wei's second "multicultural" restaurant, the first being the identically named Weia Teia in Oberlin. Maybe its college-town origins help explain the present dining room's almost slapdash decor, a busy amalgam of curvaceous crushed velvet banquettes, amoeba-shaped tables, and stainless-steel fountains, all done up in a color palette of Chinese crimson, steel gray, and industrial black, accented with strokes of rose red and cobalt blue, and piqued with slabs of shiny blond woodwork. But look closely and you'll also see a few sunny Tuscan-gold painted walls, a brick pizza oven, and a very traditional walnut and granite bar, all remnants of the Italian eateries -- most recently Posto Vecchio -- that previously occupied the space. The overall effect is an almost dizzying hodgepodge of design that one companion described as "East meets West, somewhere in outer space."

The large menu (a menu-snatcher's nightmare, incidentally, laminated as it is onto thin wooden paddles) is equally diverse, full of rambunctious appetizers, salads, noodle bowls, and entrées that blend European, Asian, and New World styles and ingredients with sometimes wild abandon. Take, for example, the Pepsi Shrimp appetizer: four delightfully toothsome black tiger shrimp, done up in a crunchy cola-based batter, brightened with a tasty dab of red-chile sauce, then perched onto the lip of a martini glass filled with icy Pepsi Cola. Our advice? Love the shrimp, lose the Pepsi presentation.

But more often, the eclectic approach pays off handsomely. An entrée of ginger-and-soy-glazed seared salmon, presented in a multicompartmented, red-lacquered bento box along with a juicy salsa of avocado, tomato, cilantro, and lemon, was delicious. While the sesame-seed-coated filet was a tad overcooked, we didn't care once we paired it with a spoonful of that fruity salsa; it was an unconventional love match clearly made in culinary heaven. The other goodies in the bento box were almost equally as scrumptious, including a crisp miniature spring roll, a bit of cool chopped cucumber, some scallion-topped soy-and-ginger dipping sauce, a sesame-seed-coated triangle of nutty sticky rice, and a serving of sweet potato fries, lightly breaded and deep-fried to perfection.

Whimsical presentation -- a bento box here, an upside-down martini glass there -- is a big part of the pleasure of dining the Weia Teia way. A compellingly dark and earthy Tofu and Mushroom Cake, sporting two skinny soba-noodle antennae, came ringed with a sunny yellow citrus sauce that not only brightened its flavor, but made for an artistic visual counterpoint on the plate. Grilled filet mignon -- a truly mammoth hunk of meltingly tender beef, served with oyster mushrooms and a fetching star-anise-and-cognac reduction -- became even more impressive when it arrived topped with a substantial bridge and pagoda, like something out of a Japanese garden, all made from crisp, buttery pastry. As for the upside-down martini glass, its base formed a pedestal for a cold, creamy crab-and-avocado salad, speckled with bits of tomato and scallion and lots of crunchy toasted sesame seed, while the bowl enclosed a decorative tangle of shiny baby greens. In fact, there seemed to be no end to the kitchen's inventiveness. We had to send the filet (ordered medium rare, served scarcely singed) back to the cooks for a little more grill time. When the entrée returned to the table, now done just right, the plate was all spruced up. Gone were the crumbled remnants of our once-tasty bridge and pagoda, replaced by a crunchy little spring-roll wrapper stuffed with emerald baby lettuces.

Yet for all its focus on unusual presentation, the kitchen seems somewhat less creative when it comes to using its flavor lexicon. If you don't like the pungent taste of aromatic Chinese parsley (also known as cilantro or coriander), the crunch of toasted sesame seed, or the bite of green onion, watch out: These, along with an assortment of similar-tasting soy-based sauces, are incorporated into nearly every dish. As a "multicultural" restaurant, the flavors of the whole world are at Weia Teia's disposal. It's a shame, therefore, that Wei and his staff haven't been a little more audacious in their choice of seasonings and ingredients.

Among the half-dozen noodle dishes, we enjoyed a big bowl of lush egg noodles in a moderately rich chicken broth, studded with lots of steamed and shredded chicken breast, cilantro, green onion, and baby spinach. And we can't wait to get back and try the Weia Teia version of spicy sesame noodles or the pad thai -- stir-fried rice noodles with egg, bean sprouts, and a choice of chicken, shrimp, or vegetables.

Lunch entrées are accompanied by the housemade soup of the day; the same soup is an à la carte item during the evening. One day's Asian-style carrot soup, with a mellow chicken stock flecked with bits of breast meat and (of course) cilantro, intrigued us with its interplay of sweet, sharp, and peppery flavors. At dinner, meals are enhanced with sesame-seed-crusted yeast rolls, wrapped around a piquant filling of peanut butter, scallion, and Asian seasonings.

Weia Teia has a full bar, including a small selection of Asian beers and an equally small wine list with only a few selections by the glass. Next time we'll just stick to the peach-flavored iced tea or the hot teas (exotic chrysanthemum and deeply flavored oolong among them) poured from ornate Asian teapots into thimble-sized pottery teacups. On a similar note, we were disappointed in the dessert offerings, which, on most nights, are limited to slices of predictable bakery cheesecakes. On Friday and Saturday nights, the kitchen does serve a housemade citrus flan with litchi nuts and a sugar-crystal crown; it would be great to see such signature offerings expanded in the future.

As far as service, waiters at both visits were friendly and reasonably attentive, and our charming hostess (Wei's partner, Shwu-Chen Chai) made several sorties through the dining room to check on guests' satisfaction. However, pacing was a persistent problem, with soups coming to the table with our entrées during a lunch visit and dinner arrivals spaced so far apart that some of us were nearly done eating by the time the last of us got her meal. And we know this ain't the Ritz, but we were still surprised to be told to hang onto our soiled flatware when our plates were cleared, instead of simply being given clean setups with each course.

But whatever Weia Teia lacks in refinement, it makes up for with exuberance. This is fun food -- flavorful, creative, and presented with a flair for the fantastic. And in a world that has seen entirely too much of calamari, shrimp cocktails, and burgers with fries, isn't it nice to have a fresh alternative?