With an Expanding Portfolio of Restaurants and Bars, Will Hollingsworth Talks Buildings & Food and a Hospitality Race to the Middle 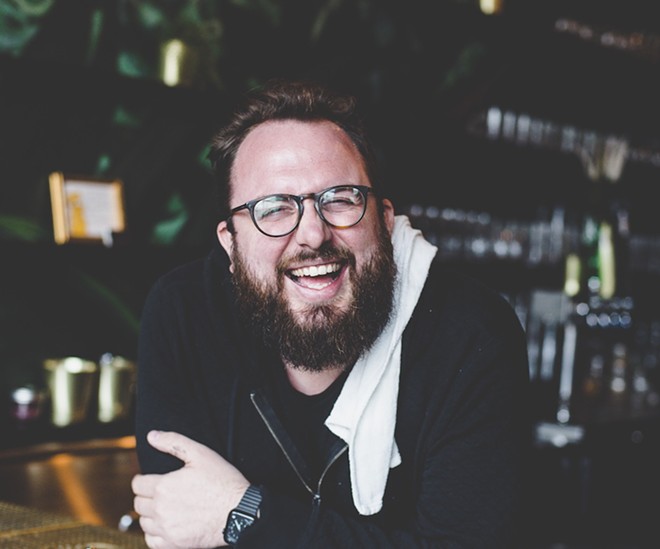 While nobody was paying attention, Will Hollingsworth has been quietly assembling one of Cleveland’s most important hospitality groups. Under the umbrella Buildings & Food, Hollingsworth has grown his portfolio from a lone cocktail bar to a budding empire of four establishments with a handful of ambitious projects in the works.

Now 36, Hollingsworth has been working in Cleveland restaurants for 13 years. Back then you could find the gabby bartender behind the rail at Lolita, which he calls one of the best restaurants this city has ever seen. While bussing and bartending, he managed to transform a dusty corner in the basement of a 150-year-old building into the Spotted Owl, an elegant neighborhood bar. Five years later, Hollingsworth opened a second Spotted Owl in a converted firehouse in Akron. When Prosperity Social Club hit the market two years later, he snatched up that timeless Tremont tavern in a New York second.

When I meet up with Hollingsworth, we’re sitting in a quiet, half-finished bar in Detroit Shoreway. For less than two years, this space was home to a quirky bar called Tributary. In a couple months, Hollingsworth will reopen it as Old 86, “a regular-ass bar,” the newest addition to Buildings & Food.

While other employers struggle with staffing issues, this group seems to grow merrily along.

That was the mindset that fueled the recent acquisition of Good Company in Battery Park. It was chef-owner Brett Sawyer’s talent, passion and pursuit of perfection that prompted the union. That “big-tent” approach is also behind a new partnership with Charlie Eisenstat, who will now operate his local coffee roastery under the Buildings & Food umbrella.

When Hollingsworth talks about what projects he wants to pursue, he uses words like innovation and preservation, which drive his obsessive decision-making process.

Hollingsworth’s definition of preservation goes beyond Cleveland’s “buildings and food” to include a broader focus on our city’s idiosyncratic hospitality culture.

“This is the thing I spend most of my time thinking about,” he says. “When Sokolowski’s goes away, when Seven Roses goes away, you don’t get those places back. There’s a classic hospitality experience that happens in Cleveland that doesn’t happen anywhere else and it needs to be preserved. And there’s a tremendous amount of urgency to it.”

That sense of urgency is a response to an influx of real estate developers who are assuming the roles typically reserved for restaurateurs, Hollingsworth states.

“Restaurateurs like Doug Katz and Jill (Vedaa) and Jessica (Parkison) should be building restaurants – and they should have the freedom to do it the way they want to do it,” Hollingsworth says. “Real estate developers are building restaurants in this town and that’s not good because it creates cynicism, it hastens a race to the middle, and we end up with these Instagram restaurants. There’s this risk that 10 years from now you could go to Indianapolis, Detroit, Pittsburgh or Rochester and you’re not going to be able to tell where the fuck you are because they’re all the same.”

Next up for Buildings & Food is the expansion of Good Company, which Hollingsworth describes as a “family-friendly burger joint.” Currently, the Spotted Owl in Akron is being converted into that restaurant’s second location, with a summer opening planned. If things go well, another location is likely.

“When you go there and have that experience, it’s very easy to imagine bringing it out to where the families are,” says Hollingsworth.

And in what Hollingsworth calls “a spiritual coup,” Buildings & Food recently purchased the Lola/Lolita building in Tremont. It’s a full-circle play for longtime partners Jonathan Sin-Jin Satayathum, Kathleen Sullivan and Hollingsworth, who worked a combined 23 years at 900 Literary Road.

“We all worked there, we all met there,” he says. “So the fact that we, together, have been able to build this thing that has allowed us to acquire what I consider the most iconic restaurant property in the city is really special.”

Shuttered since a fire ravaged it seven years ago, the building essentially is a brick shell with a new roof. Given that it needs plumbing, electrical and HVAC, Hollingsworth pegs this as a two-year project.

“I want to build the best restaurant this city has seen in 25 years,” he says. “I want to make good on the promise of that building.”