Creep Show: A review of the Coraline DVD 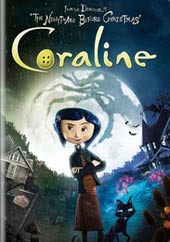 Coraline is a stop animation film (think Rankin & Bass’s The Year without a Santa Claus or, more fittingly, Tim Burton’s Nightmare Before Christmas , which Coraline director Henry Selick also directed). Based on a book by Neil Gaiman, it’s the tale of a young girl who gets exactly what she wants and then some.

Coraline (voiced by the once omnipresent Dakota Fanning) moves to a new apartment in what’s dubbed the “Pink Palace.” With no friends around and her parents (Teri Hatcher and the “PC” guy from the Macintosh/PC commercials) totally preoccupied with a garden catalog they’ve been working on, Coraline is bored and a bit neglected. She finds a secret door to a parallel world where her “other mother and father” dote on her, fixing her up with fantastic gardens, homemade dinners and one-of-a-kind clothes. But, with some guidance from a talking cat that can travel between the two universes, Coraline quickly discovers not everything is what it seems. Not only is her second mom actually cruel and manipulative, but she’s also adamant that Coraline replace her own eyes with black buttons like the rest of the inhabitants in the alternative household.

I found Coraline to be a bit slow moving and hokey in parts, particularly when the ghosts of other children enticed through the passageway appear in the narrative. And children with button eyes and mouths sewn shut creeped me out in a way that wolves eating children in red riding hoods, insane chocolatiers threatening naughty children with trash compactors and a queen shouting “off with their heads” never did. But, if the glowing reviews compiled on Rotten Tomatoes and other sites are any indication, I am in the minority. The DVD version of Coraline comes in 3-D but, sitting in front of an HD flat screen in the dark with the cardboard glasses perfectly positioned, I can’t say the technology really translated. The colors seemed off, and the effects didn’t wow. The 2-D version (also included) would probably have sufficed.