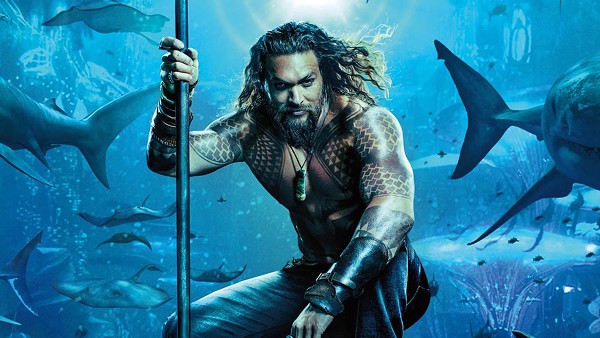 Jason Momoa as Arthur Curry, aka Aquaman
Aquaman, the latest and brightest detritus leaking from the DC Extended Universe's garbage can, stars Jason Momoa as a half-man, half-Atlantan meta-human who can breathe underwater and speak to fish. The bloated two-and-a-half hour action epic is visually indistinguishable from a Lisa Frank folder.

In keeping with DC's model, character development takes a back seat to special effects. And so we've got, among things, armies of sea creatures waging war underwater in such florid aquatic spectacles that it's probably safer to view in sunglasses. We've also got multiple settings: the desert sands of Africa, the cobbled streets of Sicily, the seaside bars of Massachusetts and the palatial ruins of Atlantis itself, "somewhere at the bottom of the Atlantic," all of which are staging grounds for enormous, explosive sequences at the hands of director James Wan (Saw, The Conjuring).

As an origin story, which this film ought to have been — notwithstanding Aquaman's introduction in 2016's Batman V Superman and his appearance in 2017's Justice League — it sucks. We've got a single, pre-title-card scene of no more than 90 seconds. It's young Arthur Curry, getting bullied in an aquarium and then calming a shark down with an outstretched hand. The other fish converge — it looks as if Arthur is controlling them through the glass — and the children gape at their classmate's power! Later on, we've got some "training" flashbacks in which a teenage Arthur learns cool fight moves from an Atlantan vizier, whose name is Vulko, (Willem Dafoe).

Most of the names are just as ridiculous and hard to make out. King Orm? King Atlan? King Nereus? One of the villains, whose B-storyline awkwardly threads with what is, ultimately, a King Arthur retelling, is a pirate who assumes the very stupid moniker "Black Manta" (Yahya Abdul-Mateen II). It corresponds with his very stupid outfit, which includes a helmet in the shape of Family Guy's Stewie Griffin's head and allows him to shoot laser beams out of his eyes.

Incidentally, what's up with Atlantis? Do any of these sea people have jobs? Where are all these insane high-tech underwater guns coming from? Where, for that matter, are all the women? As best I can remember, there were only two, one of whom, Queen Atlanna, (Nicole Kidman), was banished after she deigned to reproduce with a human man — hence, Aquaman; and the other of whom is nicknamed Mera, (Amber Heard), a princess who may or may not be Aquaman's half-sister, but is certainly betrothed to King Orm (Patrick Wilson), Aquaman's half-brother, and is also of course Aquaman's romantic interest.

She looks distractingly like a live-action Little Mermaid. At one point, in a representative stab at humor, she takes a big bite out of a bouquet of roses after sniffing it. Get it, she's a fish out of water!

The whole narrative may be read as a video game. There are silly minor tasks — Solve the puzzle! Capture the trident!; various levels and boards; and even a final boss — "The Karathen," voiced by none other than Julie Andrews.

All that said, Jason Momoa is not only a stunning physical presence but is gruff and charming in the lead role. He instantly elevates Aquaman above the likes of the abominable Batman V Superman, which was not only bad but somber to boot. Momoa may or may not be taking things seriously, but his occasional levity — even in the confines of a bad script — beats the dour constipation of Ben Affleck's Bruce Wayne.