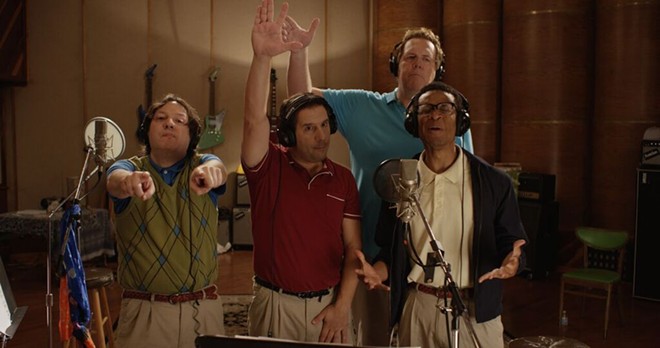 Courtesy of Joel Levinson
Joel Levinson, the director of the comedy Boy Band, says he would send ideas for feature-length films to his brother Stephen on a regular basis. Stephen rejected most of them before giving the green light to Boy Band, a zany comedy that screens at 5:30 p.m. on Saturday and at 3 p.m. on Sunday at Tower City Cinemas as part of the Cleveland International Film Festival.

Shot in Dayton, the film stars comedic actors Steve Agee, Jordan Carlos, Seth Herzog and Dave Hill as members of a boy band that "got old and fat," as Levinson puts it.

“I was thinking that we had to make a low budget music, and my biggest concern was sound,” says Joel Levinson via phone from his Yellow Springs, Ohio, home. “I wanted the sound to be good. If I want the sound to be good, and we make a movie set at a recording studio, we’ll have great sound. The movie is the story of a boy band that got old and got fat.”

Levinson says the movie works on a deeper level too since it’s about someone who makes the mistake of doing the same things he did when he was young even though the returns begin to diminish.

"That’s my own story,” says Levinson. “I had a lot of success and wanted to try other things but was scared to try them. It’s really a story about me. It’s a universal journey. We figure out the personality that works for us in high school, and we keep doing it in our twenties and thirties.”

Levinson describes him and his brother as “a class clown" and "a class comedian.”

“My brother was the writing funny guy, and I was the one pulling my pants down to get a laugh,” he says, adding that his brother currently works as a monologue writer on Late Night with Jimmy Fallon. “We worked well together. We always wanted to make movies.”

Levinson says he cast Hill because his brother is friends with Cleveland native, a musician, actor and author with a penchant for absurd comedy and the ability to shred on the electric guitar.

“We think he’s hilarious and his face was perfect for the character he played,” says Levinson when asked about Hill. “We did a musical comedy album and used him on the album. That was our first time working with him. We did a comedic retelling of the Alamo. We realized he is hilarious and musical and the right age and has a hilarious face. One of the keys is that it was important to have Dave [Hill] in [Boy Band] because it meant we had someone who could anchor the music and make it believable. He brought that street cred.”

While the storyline might be similar to the 2016 Andy Samberg flick Pop Star: Never Stop Popping, the limited budget meant that the Levinsons had to take a much different approach.

“I love Pop Star, but we can’t have [pop singer] Seal and wolves or stadiums with 15,000 fans,” he says. “We have to make our movie compelling because the interpersonal relationship with four dudes in a band trying to navigate two decades of conflict is engaging. I think it came out that way. It’s comedy, but it’s driven by character more than anything.”

Levinson will attend the CIFF screenings of the movie.