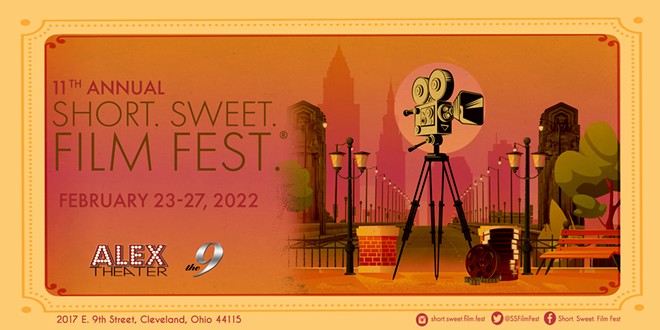 The festival, which is both in-person and online, then features extensive programming from Thursday, Feb. 24, through Sunday, Feb. 27. Patrons must show proof of vaccination before entry and should show a vaccination card or a clear photo of the card on their phones when checking in at the box office.

After opening night, the programming really ramps up. There will be a special Student Filmmakers’ Night that starts at 6 p.m. on Thursday, Feb. 24. Student films will show from 7 to 10:30 p.m., followed by a Q & A with filmmakers and a student filmmaker's networking/social event. Also that night, the Short. Sweet. = will feature select films in a reduced sensory environment.

“We want to make the festival more accessible,” organizer Michael Suglio says in a phone interview. “My staff approached me last year to create one night in a tiny theater on the third floor with a reduced sensory environment. I’m really proud of this. I met with the Cuyahoga County Board of Developmental Disabilities and we looked at the space to see how we could space people out. You want there to be more light but less sound. It’s called the Short. Sweet. = program. Tickets are significantly cheaper, and I’m going to get some distraction toys, and we have tents in case they need a break from the space."

A local Filmmaker's Night is slated for Friday, Feb. 25. Doors will open at 6 p.m., and films will screen from 7 to 10 p.m. followed by a local filmmaker's networking/social event.

“That night is all local films,” says Suglio. “They’re all very good. It was a nice, pleasant surprise that people safely made films over the summer and leading into the fall. That was really cool.”

Doors open at 10 a.m. on Saturday, Feb. 26, and the programming includes a bit of everything — comedy, animation, music videos, virtual reality, LGBTQ, drama and horror.

“We start [Saturday] with comedy and animation and then another program of comedy and music videos,” says Suglio. “We have virtual reality, which is a small ticketed event. We have to clean the equipment between showings, so it has to be limited. We also have a free screening at the dog park at the Metropolitan at the 9, which is inside. You can sign up for a ticket, and we want everyone to make some kind of donation. In the evening, it’s horror and drama. The horror films are almost all local. We also have our very successful Short. Sweet. + program, which is LGBTQ programming. It’s highly curated. We have a professional discussion with people from the community too.”

The festival closes on Sunday, Feb. 27, with screenings of local films and documentary films.

“It’s another three hours of local films,” says Suglio. “We have documentaries and the Best of the Fest. You can watch them with the judges and they’ll talk about what is really good about the films. It’s more of an educational thing. The last program is already sold out. It’s a mini-competition where you can pull prompts, and you have 30 days to make a five-minute film. There will be a separate panel of judges just for that. We have 20 films for that. There’s a cash prize. It’s really great to see so many participants.”