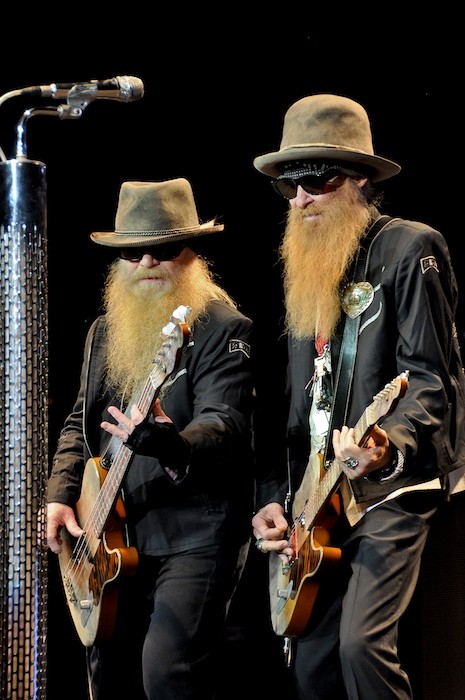 ZZ Top singer-guitarist Billy Gibbons first formed his “little band from Texas” in 1969. The blues trio has been going steady ever since and is currently touring behind 2012’s excellent La Futura. Gibbons recently answered a few of our questions via email. The band performs at 8 p.m. on Sunday at Jacobs Pavilion at Nautica.

You were inducted into the Rock Hall in 2004. Talk about how much that meant to the group?

It meant the world. The recognition was, of course, much appreciated. The fact that we were inducted by Keith Richards was the, ahem, topper. It was one of those "if I had one moment to live over again" kind of circumstances.

I know you’re tight with the Black Keys and have even jammed with the guys. To what extent did they influence the music we heard on your latest album, La Futura?

We dig 'em lots. We thought the trio were the minimalist end of the spectrum yet they got us slimmed with just two. Black Keys do their thing as we do ours — we're kindred spirits so there's a mutual admiration among us for sure.

What are the chances Dan Auerbach will one day grow a beard as long as yours?
We're not in competition on that, however we do acknowledge a head start. Auerbach could certainly give it a go and see how long it gets… a lengthy set of chin whiskers is good company, goes wherever you do but does require maintenance. It's a commitment well worth the effort. Highly recomended.

Who possess the better vinyl collection?

Our LPs and 45 have been in storage (along with a plethora of guitars and cars) for some time so it's hard to say. Again, we're not competitive by nature and "better" is a subjective term. Let's just say we got some great sides that we can all pull out and spin.

Talk about what you like about listening to an album on vinyl?

It's interactive and tactile… many senses are involved (yeah, some of us actually detect the appealing aroma within the grooves). A vinyl record keeps you on your feet — you have to turn it over — so that's good exercise. It's aerobic and the sound is very human, not that we have anything at all against machines and technology in general.

You’ve always had cool cars in your videos. What’s your car collection like and do you have a favorite?

It's growing all the time and we take some of the pieces out and give them some exercise as often as possible. We're really enjoying the Mexican Blackbird at present.. an ultra chilled out '58 Thunderbird that black, of course, with gold scallops. The car is really well traveled… Japan and back! And the latest, possibly the greatest is the "Tequila Runner"…a Bonneville-styled '33 Ford 3 window coupe…the bad little sister to the original Eliminator Coupe.

You played on the last Tonight Show that Conan O’Brien hosted. What was that like?

Big, big fun. Jimmy Vivino put the whole thing together with just about a half day's notice. We really dug backing up Will Farrell (and his about to give birth wife) and Conan, himself, turned out to be quite a picker when he joined the ensemble. That was one to remember, for sure.

The song “Flyin’ High” made its debut in space. How’d you pull that off?

Astronaut Mike Fossum, based in Houston, has been a pal for a long time. When Mike heard we were working on a song entitled "Flyin' High" he naturally wanted it for lift off for the International Space Station in the Soyuz launch vehicle. The song joined him and the crew in space as they went flyin' high.

You’ve played in Northeast Ohio on countless occasions and just put on a great show a few months ago at the Akron Civic Theatre. Do you have a favorite memory of performing here?

Yes, of course. It's a great jewel of a theater right in the heart of "Rubber City." The acoustics are fine and the audiences are always ultra enthused. We always attempt to reflect that in our show there.


What advice would you give to a young guitarist who wants to learn to play the blues?

Bear down on it and just let it out 'cause it's in there. Rock on…!