Beachland Co-Owner/Cleveland Rocks: Past, Present & Future Executive Director on How IDLES Symbolize the Struggle for Success 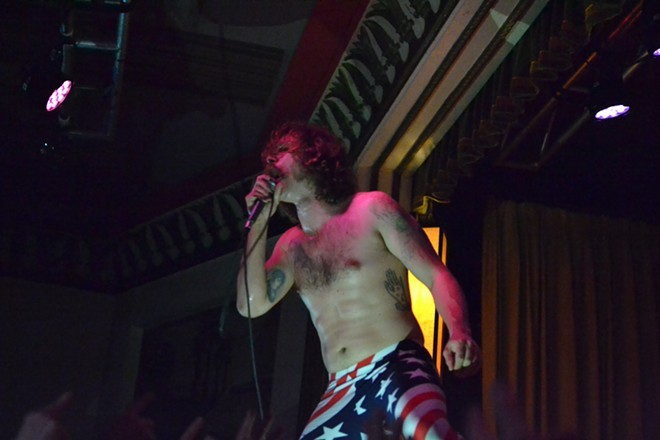 Jacob DeSmit
IDLES performing at the Beachland in 2019.
I caught the end of Jimmy Kimmel Live in early November when IDLES, a band from England, made their American TV debut playing their newly released single entitled “The Beachland Ballroom,” named for the concert venue my partner Mark Leddy and I started nearly 22 years ago in a marginal neighborhood in Cleveland.

As IDLES lead singer and songwriter Joe Talbot was screaming through my TV “DAMAGE, DAMAGE, DAMAGE,” I found myself wanting to join in. The urgency of his scream cut deep, and I mentally told him “you captured my pain” and possibly the pain of every small independent music venue across the country who experienced total shutdown for over a year and a half. And we are still crawling from the wreckage while Idles sing, “I’m not praying, baby; I’m not begging, darling.”

In December, when Omicron shut us down again, we held on because the Shuttered Venues funds had finally been reaching the bank accounts of independent venues across the country. The National Independent Venue Association was created in April of 2020, fueled by the determination of more than 3,000 small clubs like the Beachland creating the battle cry “Save Our Stages” to attack the inboxes of Congress with no partisan regard.

Talbot’s lyrics reflect those early days, “They could hear me scream for miles, the silence ringing for days.” It took all of the millions of music fans on NIVA member lists hitting send to mount one of the largest lobbying campaigns in history and get the Shuttered Venues Operating Grant (SVOG) passed in December 2020. And Talbot sings, “As soon as the rush went away, I need not look for a way, Damage, damage, damage.” It would be almost another year before funds would be fully dispersed.

While this song was supposedly written about the band’s struggle for success and seeing it manifest itself symbolically at my venue, that in and of itself speaks to the passion of popular music culture and its capacity through determination. These punk rock Brits from Bristol played an impressive attention-getting show in our small 148-capacity tavern in March 2018 to 110 people as did acts before them like the Blacks Keys, the White Stripes, Drive-By Truckers, the Hold Steady, the Decemberists, Lucius, Trampled by Turtles, Sharon Jones and the Dap Kings, Joe Bonamassa, the Milk Carton Kids and on and on. After their tavern set, they wandered through the kitchen to gaze into our bigger 500-capacity ballroom with its old-school proscenium stage and longed to conquer that room.

And they did, on May 14, 2019, selling it out and turning the night into a sweaty moshpit of mutual love with an enthusiastic audience. It is in those moments, when audience and performer step into a transcendental monism, where the magic happens. “Inch by inch, foot by foot, I was on my knees for days, and then I set on all fours, and I made, I made, I made, I made.” The urgency of breaking through is palpable when Talbot sings “Beachland Ballroom.”

Finally, in early 2022, the music started moving again. My moment of watching the dam break was with a band called Lucky Chops who finally played the ballroom on Jan. 25, a show that had been rescheduled from May 14, 2021, which was rescheduled from Sept. 19, 2020, which was rescheduled from March 19, 2020, three days after we were ordered into shutdown by the governor of Ohio. And we still have shows, like our sold-out two nights with They Might Be Giants in October, with tickets that were originally sold in 2019. For our tenacious head of talent relations, James Carol, it has been a two-and-a-half year roller coaster of taking calls from booking agents moving shows. Like other venues — theaters, museums that put on live events, —you have to have resolve even under normal conditions. In some ways, Beachland is still stuck in March 2020, which was our 20th anniversary month.

Our friend Kathy Blackman at the Grog Shop is marking her 30th anniversary this month, a longevity that is extremely rare in the world of independent venues, always just struggling to keep the AC working, the sewer lines clear and the PA from blowing up. We and all of our determined staff members are still very tired from dealing with COVID so that cry of “damage, damage, damage” has special meaning.

And now, IDLES are playing a bigger venue, the 1800-capacity Agora, tonight with Beachland co-promoting, and it’s close to selling out. The band is coming to shoot some video at the Beachland the next day, so I and all the Beachlanders want to talk to Talbot and his mates about how much the song means to us. We put a CD single of it on our jukebox in the basement green room, and blast it. Our small underpaid staff is looking at IDLES’ return as symbolic of conquering heroes and feeling therefore triumphant of our collective stamina. In March of 2020, we rallied to start an online merch store to keep us alive and have been rallying ever since, putting a tent in our parking lot in the summer of 2020 and creating socially distanced 64-capacity shows in the ballroom in Oct. 2020 once the total shutdown was lifted.

Our incredible supporters bought merch, sent in donations and Save Our Stage emails while the core staff turned into Amazon-style shipping processors, running to the post office and finding apps to estimate shipping costs, while we waited. And then, slowly, we started doing long-needed projects to our historic, converted Croatian Liberty Home that was built in 1949. The smoke-stained ceiling in the tavern was finally replaced after 21 years, the ballroom was painted and a proper soundbooth was constructed, a tap system installed under the tavern bar and countless repairs were all spearheaded by a caring team, now counting down until IDLES come and film tomorrow.

COVID still has us cautious, audiences are slow to return and touring bands are periodically cancelling at the last minute because someone got the virus, but we are slowly getting back to the normal chaos of a live music venue with 500 shows a year and 1500 bands loading in and hoping to have a magic moment on our stages. The past two plus years have damaged everyone’s spirit. We lost our financial backer and partner Nick Amster in April 2020 to a sudden heart attack, and the list of long-time music supporters, players and extended Beachland family that followed during this time has been tough. The “before time” may never come back and we may all hear Joe Talbot screaming in our ear….DAMAGE, DAMAGE, DAMAGE for quite awhile….but we’ve put a Beachland slogan up on the back wall of the ballroom to remind us to just keep going. “It Don’t Quit” is a tribute to our old manager and band leader of local legends The It Men, Ken Janssen.

Ken was going to take over the Beachland as Mark and I aged out but instead came down with a rapidly moving version of ALS and we lost him at 41 on Jan. 1, 2015. Even as he was losing his voice and confined to a wheelchair, Ken insisted on playing shows, thus the “It Don’t Quit” T-shirt was invented and became our motto much like the Music Saves sign next door in front of the old indie record shop is symbolic of this entire little urban neighborhood that the Beachland anchors. And there is a beach by my little lakefront cottage home, not far from the Waterloo Arts and Entertainment district where the venue sits, a place I fell in love with in 1985 and the reason I envisioned the Beachland as a destination location to attract a community and turn around the urban decay that was creeping in in the ‘90s.

Ken became my neighbor, and many staff members have settled into affordable houses with lake access. Over the years, especially in the early Beachland days, bands stayed at our house. When former Squeeze star Glenn Tilbrook’s bus broke down on one of his Fluffers tours, he and the band stayed with us for a few days, and he also wrote a song called “Beachland Ballroom.”

Music is often like the force of nature, the sound waves hit you and take you out of your daily damage, make you want to sway and dance, shake the constraints. When you can bring hundreds of people together to have the same transcendent experience, something happens, culture is made and isolation is bridged. Bands become loved for creating those moments. Beachland and so many damaged venues across the country stubbornly fight to birth those moments.

So the Beachland continues to wait for COVID to be behind us, and I ponder what is next sitting at my home office desk looking out on a moody Lake Erie, while I listen to IDLES sing my feelings — “If you see me down on my knees, Please do not think that I pray, Damage, damage, damage, DAMAGE, DAMAGE, DAMAGE.”