Metallica returns with the most anticipated metal album in ages. 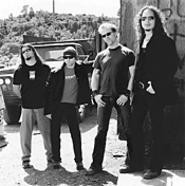 Anger mismanagement: Metallica is pissed. Their fans will be too.

Metallica needs an image overhaul the way frontman James Hetfield needed to dry out. It's been almost six years since the band bestowed an album of original studio material upon the world, and in the interim, Metallica has dropped dud after dud. Since 1997's lukewarm Reload, there's been a lame, Moody Blues-esque symphonic live album; a two-CD set of covers, with every one recorded after 1989 a disappointment; and the very public, very self-inflicted demolition of a hard-won reputation for integrity and fan-friendliness. Metallica has been a corporation for a long time, but lately it's all you can see when you look at them.

St. Anger is intended to be Metallica's rebirth, the reclaiming of their throne. The official story's been that this record, due out on June 10, is the hardest, heaviest thing they've ever done. That it's going to kick everyone's ass who hears it and regain all the cred they've spent a decade or so throwing away. That it's the new Ride the Lightning.

They really said that.

St. Anger is definitely the noisiest, ugliest record Metallica's ever made. It scrapes and slams and crunches and screeches. Lars Ulrich's drums crash like empty barrels whacked with steel rods. James Hetfield's guitar chops the air with the fury of a prizefighter. (Kirk Hammett's guitar, by contrast, is apparently sitting in Jason Newsted's garage -- there's not one solo anywhere on this album.) The vocals are sometimes distorted, like Ministry's; other times, though, Hetfield's voice cracks, as he strains for long-lost notes.

The mix is punishing. Too often, the guitars and drums blend into a wall of raw noise. Sitting and listening to this record (under the gimlet eye of a surly, paranoid publicist -- Lars's hatred of the internet forbade mailing advance copies to critics) isn't cathartic, the way the old albums were. It's painful. Eventually, you start wanting to escape, to run from the noise and let a different room's empty, silent air caress your eardrums, like cool water after a too-hot, too-big meal.

And St. Anger is big, make no mistake about that. Eleven songs; 75 minutes. Many tracks approach the nine-minute mark, bloated with extra choruses, false endings, and tacked-on final sprints. There are false beginnings, too -- the fourth track, "Dirty Window," opens with a great, huge, doomy riff, but it's abandoned almost immediately in favor of the one that actually anchors the song. Four minutes in, another riff is announced. And don't forget the pre-chorus, all soft percussion and crooned vocals. The whole ugly mess is patched together with the ProTools equivalent of staples and Scotch tape.

But let's begin at the beginning. "Frantic," the album opener that was previewed on Metallica's MTV Icon special, encapsulates everything wrong with their new music. Announcing itself with a hard, slashing guitar tantrum, it suddenly stops, leaving behind a six-note bass figure that repeats twice. Every time the song roars to life, the bass figure crashes it again. The trouble is, the riff is a good one. It's loud and mean, and it makes your heart jump in your chest -- but the bass part is flaccid. It's not a crescendo or even a fanfare; it's just six notes that sit there like the band's resting up for the next fast part, and it drains away all the momentum.

The best song is track eight, "Sweet Amber." A swampy slide guitar introduces the hardest thrash riff on the disc. Four minutes in, it gets "Battery" fast, but the vocals are sung at half-speed. It's a great juxtaposition. And unlike the rest of the disc, the lyrics aren't embarrassing. For the most part, St. Anger is a solipsistic wallow in James Hetfield's pain. The songs are full of self-pitying therapy clichés such as "My lifestyle determines my deathstyle" and, from the title track, "I don't want my anger to be me." What's he talking about? Hetfield's anger was half of what made Metallica great. These new songs make Henry Rollins seem profound by comparison. And they don't even sound good.

The old Metallica was as fast and riff-happy as Exodus, Anthrax, and Slayer -- but it was clean. The band's sound gleamed like razor wire. St. Anger is coated in all the digitally simulated grime millions of dollars can buy; the trash-can drums and tinfoil cymbals are the worst of it, but the guitars sound ugly, too. Nothing here sounds like it came through an amp. All the fine-tuning that once kept the Metallica machine street-legal is gone, replaced with stolen Helmet riffs and lyrics that sound co-written by Hetfield's AA sponsor.

St. Anger introduces the fourth version of Metallica. There was the Metallica that took thrash metal aboveground, from Kill 'Em All through . . . And Justice for All; the Metallica that got arena- and radio-friendly for the Black Album; the Metallica that embraced boogie-rock and Marianne Faithfull on Load and Reload; and now, there's this Lazarus Metallica, which wants to be hard and heavy again, the way it was in the old days. But that was a long time ago -- and they were pretty drunk. Metal's gotten faster, harder, and grittier in their absence, and the new, middle-aged Metallica can't compete.

Deep down, they probably know it, too. On MTV, the only one worth watching was new bassist Robert Trujillo. Of course he's excited. To him, it's all new music. To his three bandmates, though, being Metallica might be starting to feel like more trouble than it's worth. That's how St. Anger sounds: resigned, and more than a little self-doubting. They're dressing up in old and ill-fitting clothes and hoping metal fans won't be able to tell the difference. Well, we can.