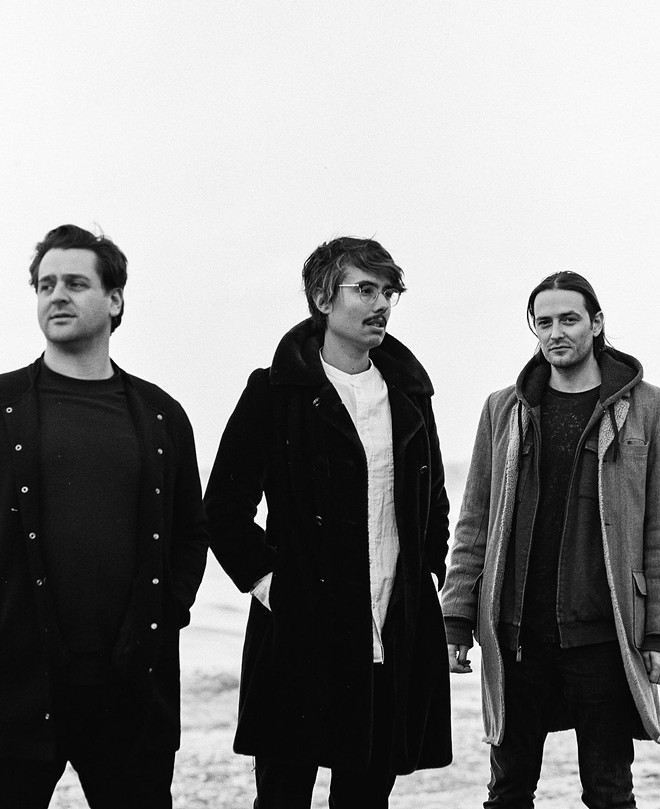 Hollywood Records
Joywave.
Initially, Joywave’s booking agent intended to route the indie rock band through Pittsburgh on its current tour in support of its new album, Cleanse, but singer Daniel Armbruster objected (and yes, he's perfectly aware of the rivalry between the two cities).

“The pandemic has made us take stock in how we spend a lot of our time, and when I saw the routing was taking us to Pittsburgh, I said, ‘You know, I don’t really care to go to Pittsburgh,’” says Armbruster, a diehard Cleveland Guardians fan, in a recent phone call from his Rochester, NY home. Joywave performs at 8 p.m. on Tuesday, March 1, at the Beachland Ballroom. It'll mark the first time the band has headlined in town. “Our booking agent said, ‘Well, I will just move it to Cleveland.’ I said, ‘That sounds so much better.’”

Joywave’s last headlining tour ended prematurely when the world shut down because of COVID-19. In the absence of touring, Armbruster teamed up with Sir Sly’s Jason Suwito for a sideproject they dubbed Best Frenz. He also wrote the tunes for Cleanse, which addresses some of the anxieties the pandemic triggered.

“I actively tried not to immediately make another Joywave record [during the shutdown],” says Armbruster. “Jason [Suwito] from Sir Sly and I did this remote project that was on the nose about what was happening around us. With the lockdowns happening, I knew every artist in the world was going to be trying to figure out what rhymes with coronavirus. I thought that would be every record coming out in the next two years. But I’m the kind of guy who looks to music when things aren’t making sense in either my personal life or in the external world. The album became this snapshot of my reality in the moment. Our first three records came from the 40 demos I had made over the a few years. This record isn’t like that. It’s just the 10 songs that came out of this moment. I’m excited about how it turned out.”

Armbruster recorded everything on the album at his home studio, but that's not terribly unusual for him.

“That’s how I had operated before anybody cared about the band,” says Armbruster, who adds that he now has his own place. “[In the band's early days,] all the other guys were working jobs and stuff, and my parents were hands-off supportive. They told me I didn’t have to move out, and I could sleep in my childhood bedroom. It’s like, ‘There’s a sandwich in the fridge.’ And that was it.”

The message of the band’s last album, 2020's Possession, was about the polarization of our culture, and Cleanse builds upon that theme.

“If we can’t all live together, then things might get bad,” says Armbruster. “That’s what I was worried about in 2018 [when writing the songs for Possession]. That looks cute in hindsight. Now, there are people who have died because they listened to the wrong political message. It’s insane. That first track ['Pray for the Reboot'] is a little bit of ‘wow — it’s way worse than I could have possibly imagined.'”

With its swirling synths and lyrics about how the "world's gone crazy," the song hearkens back to '80s pop (think Tears for Fears or Pet Shop Boys).

Another Cleanse song about polarization, “Buy American” came to fruition in the middle of 2020. The song's pulsating synths convey a real sense of urgency.

“The lyrics are very sarcastic,” explains Armbruster when asked about the song. “I have been always been obsessed with [Bruce Springsteen's] ‘Born in the U.S.A.’ blasting at the Reagan ’84 rally and people misunderstanding it. [Playing it at a political rally] ignores the verses. I wanted something that was a lot of bad advice wrapped up in red, white and blue.”

A beautiful ballad, “After Coffee” stems from time spent at home. It begins with a sparse synth riff and soft vocals before Armbruster essentially describes his morning routine over a brittle guitar riff.

“That one I had kind of a nugget of the idea of what I wanted to say pre-pandemic, and it ended up universally appropriate when I just meant it as ‘my schedule is clear and my cat is here, and I’m waking up at the same time every day and eating meals at regular times,’” says Armbruster of the track. “I was just grateful for that. It’s about making that change permanent. My favorite part of being an artist is writing and producing and making a record and not being on tour. But the shows we did get to play in 2021 made me think that maybe I was wrong. It was really awesome being on stage. You get to push people’s buttons in real time.”

“The Inversion,” a song with heavy drums and distorted vocals, takes on the decline of human agency in the face of our increasingly digital world.

“That’s probably the darkest song on the record,” says Armbruster. “Going back a bunch of years, I’ve always enjoyed exploring the relationship between man and machine. In my lifetime, I’m a kid who was pre-internet, but in elementary school, I was like, ‘This is cool.’ In the split between our digital and physical lives, the digital has been encroaching. But the pandemic forced us to live in the digital at a time when what you see is policed by algorithms and the thing that gets the biggest reaction, and it doesn’t matter if it’s positive or negative.”

While Armbruster says the band is still sorting out the visuals for the live show, he says he’s looking forward to the tour, and, in particular, is happy to finally have a headlining spot in Cleveland.

“We are going to try to bring some of the album artwork to life, and we’re still trying to figure the production out,” he says. “I’m very, very excited about it. And I’ll get to give a shoutout to Cleveland Guardians legend Ernie Clement, who is from Rochester, NY. We don’t have too many professional baseball players from Rochester, but I think it’s pretty cool he is playing for the Guardians.”