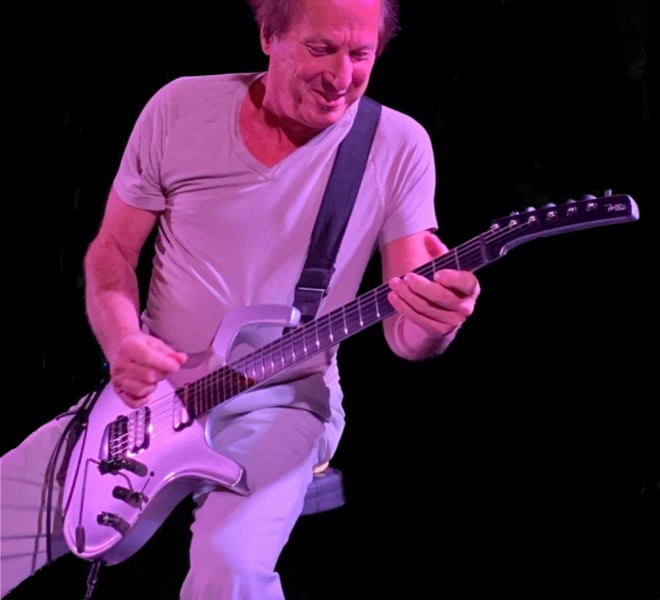 Courtesy of Glass Onyon PR
Adrian Belew.
Speaking recently via phone from his Nashville home, singer-guitarist Adrian Belew says he’s extremely pleased with the way rehearsals have progressed for the current tour that brings him to the Rock Hall on Friday, July 22.

“I’m really happy with what we’ve achieved,” he says. “It’s exactly what I was hoping for. It’ll be an interesting show this time. I’m doing it in different segments. The first part is more song-oriented, and then, it goes into a solo acoustic performance for about six songs. And then, the power trio that you normally expect comes blazing in with [King]  Crimson material and things we’ve done in the past.”

Belew says he's trying to bounce back after the pandemic wiped out what he says would’ve been “one of the most prolific years” ever. He had planned to tour South America and embark on a tour paying tribute to the late David Bowie, someone with whom he's played.

“It all went out the window,” he says. “And we had festival dates planned. They all went away.”

Grounded by the cancellations, Belew went into what he refers to as “super writing mode.” He wrote the 12 new songs on his new album, Elevator, and seven songs for an album due out next year.

“My creativity was so at a high that I even taught myself to do digital painting,” he says. “I’ve been doing acrylic paintings for a long time, but I picked up and iPad and an Apple pencil, and I went nuts. It was so fun. I love it. I must have 200 or 300 paintings. I’m putting 38 into the package for the new album. Painting touches on the same concepts and creative parts of your brain as music. It’s tones and colors and dimensions and shapes, and all those come into play when you’re dealing with music. Learning to the digital painting for me was just sitting down and trying things over and over, which is exactly how I taught myself to play guitar and everything else I’ve ever played.”

The album's first single, "a13," possesses a retro '60s pop-rock vibe and finds Belew producing exotic sounds from his guitar during a mid-song solo. Belew says the songs on the album represent some of the best tunes he’s ever written.

“During COVID, there was so much dread and unhappiness,” he says. “I want my record to be joyful and uplifting. That’s where the term 'elevator' came in as a title. It should elevate your mood. The ‘60s is when I really started. I started writing at age 16 in 1966, and the Beatles and the Kinks and the Zombies really affected my musical DNA. When I was thinking about uplifting music, that’s where I went with it. That’s what I remember being on the radio.”

As he completed the record, he realized it was solo album No. 25, a crowning achievement.

“It’s a big celebration, at least to me,” he says. “I was looking at the Bandcamp. I was counting them up. That’s quite a milestone. During all that time, I was in [the progr rock act] King Crimson or the [power-pop group]  the Bears, but I never stopped doing the solo things whenever I was home. I’ve had this studio at my home for 28 years.”

Belew famously launched his solo career in the 1980s after having worked with Frank Zappa, Bowie and Talking Heads.

“I was considered in the music world a sideman,” he says. “No one had any inkling that I was a singer and writer until I joined King Crimson. Once that took off, there I was. Right before that happened, I got invited to [Island Records owner] Chris Blackwell’s house. We were chatting. He said, ‘You’ve done a lot of things. Is there anything you haven’t done?’ I said, I’m a songwriter and I want to do my own records.’ He said he would give me a record deal, so I had the record deal coming into this band that was going to be called Discipline but became a new version of King Crimson. I had to make a decision. I said I didn’t know if I could do it. It was determined then that I could spend half the year on King Crimson and half on my solo career. Of course, it never really worked out that way.”

The band that will accompany Belew includes bassist Julie Slick, who’s played bass with Belew for the past 16 years. She was 20 when Belew first saw her performing with School of Rock. He found drummer Johnny Luca at a music camp.

“It’s a hot band, and it’s got more vocals than usual,” Belew says, adding that he’ll play three Beatles tunes just for the Rock Hall show. “As far as the power material and King Crimson stuff, we can totally nail that. For this tour, I’m focusing on that and on my solo stuff. There are other bands that do the Zappa stuff, and they do it really well. I have another band that does a Bowie tribute. I want these tours to feature more of my material."

Belew, 72, says his love of music keeps him going.

"I’m just not finished at all," he says. "I have so much left in my tank. I feel fortunate to be able to do these things and have people enjoy what I do. I’m not ready at all to stop. I have thousands of more songs. Physically, I don’t feel [72] at all. Paul McCartney is still doing it, so I can do it too.”