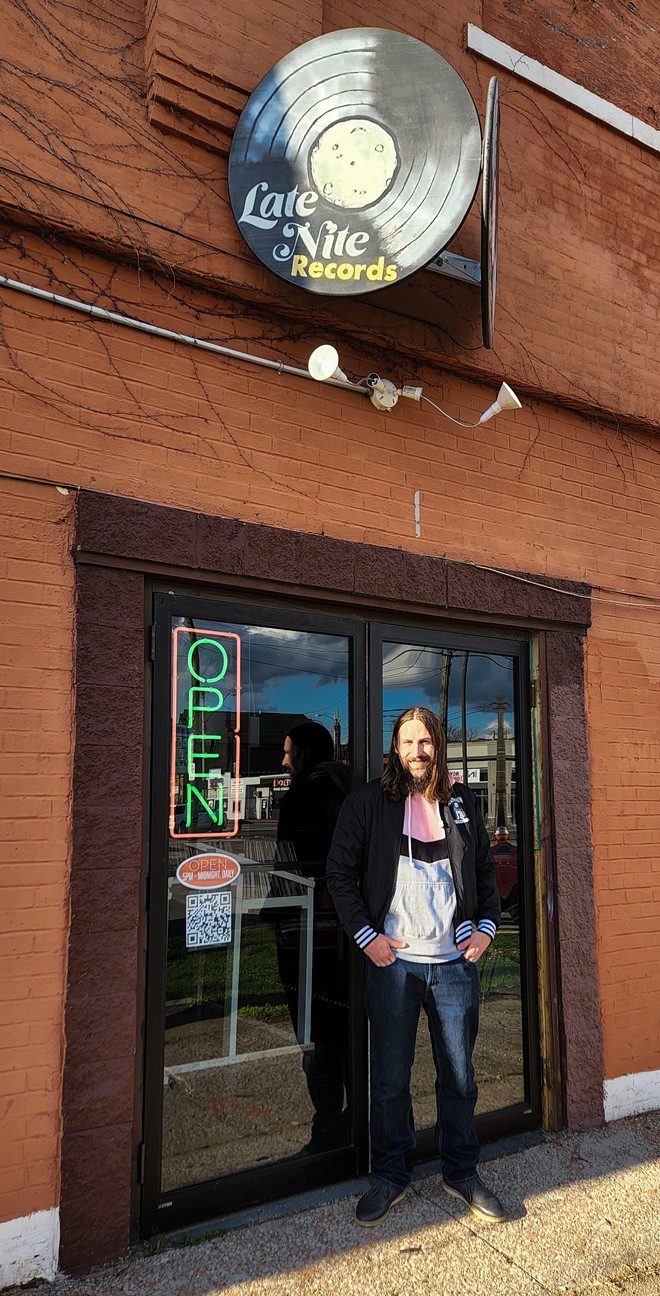 Shawn Mishak
Allen Wagner.
Earlier this week, Cleveland’s Late Nite Records had its grand opening. The new addition to Cleveland’s independent record store community is unique in its breadth of stock which includes a huge hip-hop selection, an impressive collection of 45s and a vast array of imports. What makes it stand out most significantly is the late-night hours — the place is open from 5 p.m. to midnight 7 days a week.

Lakewood resident, designer, DJ, record collector and now record store owner Allen Wagner thought it might be cool to be able to go vinyl hunting after the work day ends. Since Wagner has a day job, he knows that if you’re working a 9 to 5, it’s hard to find a record store open during these hours.

“My hours are the biggest differentiator along with my selection,” he says. “I haven’t seen a hip-hop section as big as mine aside from Amoeba in San Francisco. I love first and early pressings and have a great deal of rock, psyche and garage collectors pieces you would have a hard time finding at other stores and sometimes even online.”

Located at 2602 Walton Ave. and tucked into the little nook off West 25th right by the new PIVOT Arts Center, the store adds vibrancy to the bourgeoning Clark-Fulton neighborhood. The collection is impressive, the space quaint and the sound system hits with turntables set up for shoppers to check out albums before they buy. The store also carries vinyl carrying cases and vintage turntables.

Vinyl, having a resurgence in popularity over the years, has brought more collectors into the record store game and through all kinds of impetuses.

“I saw an episode of Married with Children in the ’90s where Al Buddy went into a record store and people were humming tunes to the workers and they knew what they were humming after a few notes and where it is located in the shop,” reveals Wagner. “From that moment on, that was what I wanted to do!”

Twenty-five years ago, Wagner began buying records for the cover art. He used his parents’ turntable until he started DJing and began searching for samples and beats to use in his sets and picking up what he could from other DJs. He says he searched out old favorites he heard from his parents when he was a kid growing up in the Parma/North Royalton area before exploring more obscure genres like electronic, oldies and hip-hop.

He amassed his collection in anticipation of the day he could open his own record shop where he can go after his day job as marketing director of Whiskey Island Still & Eatery, and Wagner’s day has finally come.

“I’m hoping to have some events, partnering with local artists, musicians and businesses,” continues Wagner. “Hopefully, [I can host] some record releases, and I spoke to an author about having his book debut here and an artist who is exhibiting across the street later this summer for some type of collaboration. I’m hoping to have some cookouts and DJs as well.”

Wagner adds he'll offer regular specials, giveaways and big promotions and that he’s considering hosting record shows where other vendors could come and sell as well. There was also some talk of hosting very minimal in-store performances and having DJs is always “on the table.”

“I look forward to meeting all the music enthusiasts and collectors of Cleveland and hopefully helping them find something they’ve been looking for or didn’t know they were!”