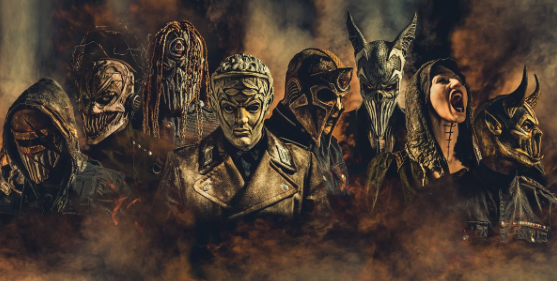 Abe Robinson at blind 7 Photography
Tomorrow, the local hard rock band Mushroomhead will release its latest album, A Wonderful Life, the theatrical group’s first studio release in five years. Produced by the band’s mastermind/drummer Steve "Skinny" Felton and mixed by Matt Wallace (Faith No More, 3 Doors Down), the album finds the group working with the Cleveland Chamber Choir for the very first time.

The release also features new singer Steve Rauckhorst, and the songs reflect a “cry for societal unity,” as it’s put in a press release.

Felton recently spoke about the release via phone from the band’s North Royalton shop where he was prepping for a photo shoot by finishing up some new masks.

I imagine you were supposed to be on the road this summer. How disappointed are you that you’re not currently on a tour in support of the album?
It’s pretty crazy to even think about it. This is the first year in 17 straight years that we haven’t had a confirmed tour. It’s the first time in seven years that we haven’t been on the road in May. It’s very strange to us to be home right now. We’re like, “Wow. Cleveland has nice weather? This is crazy." We had no idea.

I imagine you’ll be able to tour at some point. What will the stage show be like?
We keep talking about it and throwing around more ideas. We just released a new video for “Heresy,” and we talked about bringing some of those elements to the live stage.

It’s been five years since your last studio effort, The Righteous & the Butterfly. What took so long?
That’s quite a gap. A lot of that time was focused on re-establishing ourselves in Europe and the UK. In 2016, we pushed ourselves to get over there more. One of the things for our live show that’s very important to us is the addition of the water drums and extra percussion. When we traveled outside of the country previously, we weren’t able to bring those with us. So we got ourselves a storage facility in Germany and started shipping stuff over there. Over the course of a couple of years, we have built up enough gear that we can put on a decent club performance over there. We’ve been going back to Europe and the UK really well. That fell into place really well, and we did a deal with Napalm Records out of Germany. They’re putting out this new record. It’s gone according to plan. We started writing the album with this lineup in December of 2018 and continued through January of 2020, so it’s all really fresh.

You produced the album yourself. What was that like?
I’ve produced every Mushroomhead album in the past, so I know where the sound needs to live. No matter how much experimenting we do, it always ends up dark, and it always ends up creepy. It has a little bit of a hope and a lot of doom.

Where did you go to record?
We did it all here at our studio in sunny North Royalton. It’s the same place we did the last couple as well. It’s comfortable and easy. It doesn’t feel like there is a time limit going on. We were fortunate on this album to do some recording at Abbey Road Studios in London. The last time we toured the UK, we were fortunate to get some time there. [Singer] Jackie’s vocals on “Heresy” were recorded at Abbey Road. It was kind of fun. It was fun to work on the road. We had a small ProTools rig with us on the road, so we were always writing and arranging. When we were at Abbey Road, I was blown away by the orchestra room and the big rooms where they do the soundtracks. They were setting up for a film score with a huge orchestra on the day we were there. We were in the same room where Dark Side of the Moon was recorded, so it had an epic feel to it.

That opening track features such a beautiful intro with the choir. Is that the Cleveland Chamber Choir?
Absolutely. Ryan [Farrell] our bass player and keyboard player was able to hook up with those guys. I think he knows them from school. “Pulse” has a choir piece that we originally did with a keyboard. We thought it would be good to get a choir, and Ryan said he would see what he could do. Once we booked them, we thought it would be nice to have them do some more stuff. Ryan put together a couple of his own requiem pieces. We bookended the album with them, and it turned out amazing. It’s a really nice touch.

Is there a concept to the album?
It does seem like it. With the current state of the world and everything happening, you’d think we wrote these lyrics last week. You can really apply some of this stuff directly. We try to make art, but it turned out really prophetic and scary.

“Seen It All” features a melodic chorus that reminds me of Faith No More.
That main hook was written on the bus. I believe we were in San Antonio. You can hear birds on the intro of the song, and those were the birds that were directly outside of the bus. I love that track. Part of the reason we picked it is because it’s very energetic. It has a solid hook. It’s very much a Mushroomhead hook-y tune. I’ve heard people call it a modern "Sun Doesn’t Rise." I’m cool with that.

“The Heresy” comes off as a particularly dark tune. What is the song about?
It’s another one that we leave open to interpretation. There’s a lot about leaning on faith in that one. It’s about what you have faith in and what you put your faith in. It’s up to the listener to decide where are you going to stand when the time comes. It’s a reflection of the inner life and looking at your life and taking responsibility for it. That’s my take on it.

Did you go to a steel mill to record that video?
We did that at our shop as well. I do a lot of the directing and editing. We have a stable crew that helps. I have a great cinematographer, Josh Apple. He was director photography for both of our new videos. We have set design backgrounds and haunted house backgrounds, and we applied that to what we could. That one was filmed during the quarantine as well. It was hard to order materials and build stuff. It took longer than we anticipated. We did that all at home. If you saw the room you wouldn’t believe it because it’s such a small area.

How has Cleveland has informed the band’s music?
We’ll always have some kind of character that’s connected to our local roots. It’s imbedded in the music. There’s an attitude that comes out of Cleveland. It’s “don’t tell me I can’t do something.” You hear that theme throughout our music as well. Coming up in the ’90s, Cleveland had such a killer music scene. A lot of booking agents look past Cleveland, but there’s a lot of talent here. We’re always the butt of everyone’s jokes. We have come to accept it with pride at this point. It’s like, “Damn right, we’re from Cleveland.” Steve Rauckhorst has a mask that’s modeled off the Carnegie Bridge Guardian. That’s a tip of the hat to our hometown.

When the group started, were you part of the metal or hardcore scene?
We were with all of it. We played with anyone from Integrity to Unified Culture, and we did huge rave parties. We did sideprojects like 216 that crossed over into all of that territory as well. We weren’t shy. We felt like we fit in with everything. At the end of the day, it’s entertainment. That’s what Mushroomhead was meant to do. It was meant to entertain us, and for some reason, it still is. We’re lucky.

The future of live music remains uncertain, but is there any chance you have your annual Halloween shows on the schedule?
I had this conversation with my agent today. Halloween is on hold. We’re not saying it’s cancelled or postponed. It’s on hold. Our fingers are crossed. We hope the whole world comes out of this thing. We hope next year is like the beginning of the roaring ’20s all over again and everyone is ready to work and spend money and make money and live again. We’re optimistic.