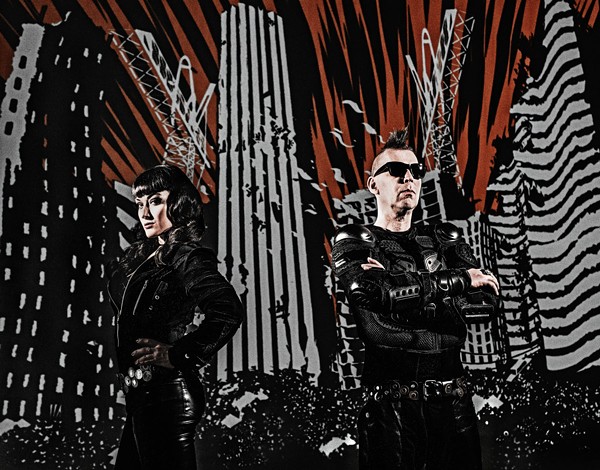 Tiny Human PR
When band leader Sascha Konietzko launched the industrial rock outfit KMFDM (originally Kein Mehrheit Für Die Mitleid, which loosely translates as "no pity for the majority") in Hamburg in 1984, the music scene there was “bland-ish,” as he puts it.

“The intention was to do something that was more fun than what was around,” he says in a recent phone call from his Hamburg home. The band’s tour in support of its new album, Hell Yeah, comes to the Agora Ballroom on Wednesday, Oct. 4. “People looked at us like we were crazy and totally avant garde.

After the band toured the States with fellow industrial rockers Ministry, Konietzko says the band began to receive some hometown support.

“It’s a typical thing for all German bands,” Konietzko says. “If they don’t make it somewhere else, they’re not worth shit.”

Drawing from proto-industrial acts such as Einstürzende Neubauten, SPK and Throbbing Gristle, KMFDM borrowed from a few different genres.

“We took EDM music by bands like Front 242 and D.A.F. and also music by metal bands and disco and funk,” says Konietzko. “It really is a melting pot.”

The lyrics regularly reference various forms of oppression, and Konietzko says the inspiration that side of things comes from more sources that will be more familiar to rock music fans.

“You have a choice to write songs about whatever you want,” he says. “I don’t feel like writing songs about how I woke up and my head hurt. I need to formulate and express myself in the tradition of the protest movement. Those were my earliest influences in music. That’s where I’m coming from. It’s from people like Bob Dylan and Frank Zappa.”

After that tour with Ministry, Konietzko realized it might make more sense to live in the States, so he picked up and moved to Chicago, which, at the time, was the epicenter of the industrial rock movement.

“I was talking to the guys at Wax Trax, our label at the time, and they said they wanted to sign us and that they had sold a lot of records,” he says when asked about moving to the U.S. “I wondered, ‘Why would I go back to German and work at a shitty day job when I can do exactly what I want here?’ I packed up my stuff and moved, just like anyone would do, and lived in what was essentially a broom closet above the Wax Trax offices.”

The band broke up for a short spell in the late ‘90s and early 2000s. During that time, Konietzko formed MDFMK and signed a deal with Universal Records. He quickly realized he didn’t have the right temperament to be on a major label.

“We did a good record that got a lot of acclaim, and we did some touring,” he says of MDFMK. “Universal wanted to do another record, and they wanted a produce to supervise the making of it. That went against the grain for me. We parted ways and I was like, ‘What are we going to do now?’ I called around and asked all the usual suspects from a few years back if they wanted to reunite. Some did, and some didn’t. That’s how it came back together.”

Hell Yeah represents another remarkable chapter in the band’s storied career. The disc commences with the infectious title track, a tune driven by a funky bass riff and percolating synths (think a cross between Pet Shop Boys and Nine Inch Nails) and then veers into alternately heavy and dancefloor friendly tunes. While it might seem like Konietzko wrote the songs in the wake of Brexit and the U.S. presidential election, he says that’s not the case.

“Songs like ‘Total State Machine’ were written before Trump entered the arena as a candidate,” says Konietzko. “We started writing the record in mid-2015 and then switched labels and were asked to do a compilation of old songs that were freshly mixed, and we had a hiatus of the writing process for the new album and then jumped back into that game. All of a sudden, things made a lot of sense. All the songs we had already written could be looked at in a different light given the current developments. There are populations everywhere being sold for stupid by their governments. It’s not just the U.S. It’s everywhere.”

“Rip the System” offers an update of the old KMFDM tune “Glory.”

“It’s one of the oldest slogans we’ve used in KMFDM,” says Konietzko when asked about the tune. “It’s about how people from all nations need to unite instead of being sold out by their governments. I extended the lyrics of ‘Glory’ by a couple of lyrics. I was interested in Nigerian pop music and experimenting with beats like that. These lyrics came into my mind, and that’s how it worked out.”

At times, the band opts to alter the typical industrial rock formula. Doug Wimbish (Sugarhill Gang) lays down some thick bass riffs on “Rx the Damned,” and “Only Lovers” features some incredibly sharp synthesizer static at its start before settling into a groove.

“A lot of the creation process is by pure coincidence,” says Konietzko. “You turn something on and dig out some machine that’s been collecting dust and move on right away.”

The production, in particular, resonates as synthesizers and live instruments pack a potent punch.

“We decided this time to get someone from the outside to do the bulk of the mixing. At some point, we got into a time constraint,” says Konietzko. “I know myself. When I’m mixing a record, I take months and months and I keep tweaking it. That had to be avoided this time around. I met this young sound engineer who I think is really good. I gave him all the material. I told him to prepare it and make it sound as great and big and loud as possible and that I would come in and tweak it for the final versions. That’s what we did. Instead of spending eight months on the mixes, it was done in two or three months, and I was really happy with the outcome.”

After a short European tour, Konietzko says the band is a “well-oiled machine and ready to rip.”

“A third of the stuff [for the live show] is from the new album, and there are a couple of things we have to play because people wouldn’t go home if we don’t,” he says. “There’s a lot of stuff we have never played or haven’t played in many years. I think there is something for everyone.”