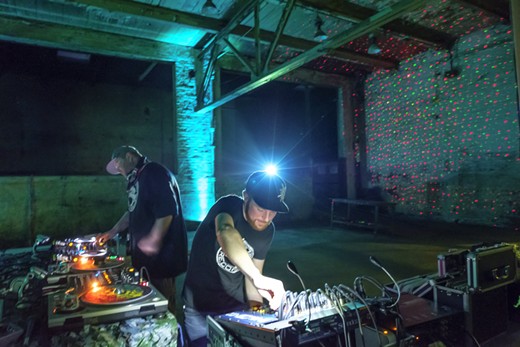 Photo via Tim Smith of Steel Yard Sound System
Jamaica’s sound systems were the forebears for modern day DJ and hip-hop culture. Sound engineers like King Tubby and Lee “Scratch” Perry came onto the scene and pioneered a new genre known as dub. They twisted and manipulated pre-recorded sound in a way that was never done before, often removing the vocals (known as the dub side) and just leaving the percussion, which in turn would be a huge influence on hip-hop. “Hip-hop came out of Trenchtown [a neighborhood in Kingston where Herc grew up],” DJ Kool Herc, one of the godfathers of hip-hop, once told Jeff Chang, author of Can’t Stop Won’t Stop: A History of the Hip-Hop Generation.

DJ Kool Herc experienced this sound system culture first-hand and brought it with him to the Bronx where he developed his “Merry-Go-Round” technique. DJs switched from break to break creating a seamless unified mix. In the early '70s, hip-hop DJs focused on the vocal-less breaks of funk and soul records to keep dancers moving.

Sound systems not only influenced music, but they also impacted politics and reflected the strife Jamaica was facing in the '70s. They were essential to a politician's success. “All any prime minister had to do was to listen closely to the week’s 45 rpm single releases, they were like political polls set to melody and riddim,” Chang writes.


Steel Yard Sound System, a new monthly event coming to Cleveland this month, will offer a glimpse into the sound system culture that originated in Jamaica back in the 1960s and 1970s. Cleveland has “[seen] a new rebirth built on the back of arts and culture," the team behind the sound systems says. "A city born from the struggle of the working class peoples. Sound system culture is the music of the people, fighting for truth and rights.”

For all of its significant influence on one of the most popular U.S. genres, especially now, Steel Yard Sound System wants to maintain a focus on the Jamaican culture that started it all. At his home in Tremont, Tim Smith, one of the main people behind Steel Yard Sound System and a passionate reggae fan, says, “We’re trying to keep it strictly sound system culture. My main focus is all dub and reggae.”

Photo via Steel Yard Sound System/Facebook
How did you get into reggae and start playing it in your sets?


I’ve lived in Cleveland for four or five years now, grew up in Akron. I’ve been DJing in and around Cleveland for a really long time. Reggae has been a part of my life since I was a little kid. so when I started DJing I was playing a style of Drum n Bass called Ragga Jungle, which is all very reggae influenced. Just from there, my actual reggae collection built and has always been part of the music I’ve played.

How are you planning to pull the Sound System parties off?

It’s totally DIY, but we’re doing it as legit as we can. We’re getting as much support from the community and we’re getting all the necessary permits and we’re going to have off-duty cops. We’re doing all of the things that we need to make it a safe space for people to come and have fun. As far as how much of a reach it has, reggae and dub have never been a widely popular music. But everyone can like reggae because it’s a positive message. It’s an uplifting vibe, but it’s kind of always been an underground music because it doesn’t get a lot of radio play. So I’d like the reggae community in Cleveland to grow; that’s kind of why I’m doing my part to help that.

Do you think dancehall has seen a resurgence in recent years with big name artists like Drake using that style on records?

Definitely you see it in a lot of pop culture with acts like Diplo and Major Lazer. They are a huge factor in that — not just dancehall, but they go around the world and pick up little bits and pieces and pull all of that together to make it a little bit more palatable for the masses. It’s a sound that has hit a resonance with the youth. I think that’s because we find ourselves in a position right now that’s very similar to the culture that happened in the 1960s and the 1970s when reggae first started to pick up. You’ve got a youth culture that is politically and socially minded. So they are recognizing the injustice that’s happening in the world and they want to change it. Reggae and dub have always been that voice of .

Do you hope your Sound System parties have that same outreach?

Yeah, definitely. For dub shows, we call them sessions because it’s not a party [and] it’s not a concert. It’s community engagement, it’s uniting everybody under this one sound to raise a message and raise a voice. I’d like to see it carry and push forward that message because it’s something we really need right now — especially in the U.S. We’re actually taking steps to evolve beyond just throwing shows and start to increase our community involvement and activism. As a Sound System runner, you’re more than just throwing parties and sessions, you really need to be involved in promoting what you’re speaking. We’re looking into the viability of actually filing a 501(c)3 and becoming a nonprofit ourselves.

Is there anything special about your equipment?

I’ve got a lot of friends who are professional sound engineers and they look at what I’m doing and they think I’m freaking crazy. They think I’m nuts, 'cause I’m using all of these older box designs and they’re really heavy and they’re like, "M you can do this for half the weight and half the size of the box!" It’s like, yeah, but it’s not the sound. These are all very traditional style box designs that were used in some of the original sound systems. The baseband designs we’re using are called scoops — because it looks like a scoop in the bottom. They were very popular in the '70s and '80s because they were dealing with really low wattage speakers and trying to get as big of a sound out of them as they could. So the physics of the way the box works is to try and amplify the wavelength is just ... you don’t get that sound in anything else. There’s a reverb chamber on the inside where the sound coming from the back side of the driver hits this back wall, drops down, comes back up, then comes back, so it kind of does this big S-curve through there and stretches the bass note — stretches the wavelength — so you’re able to hit a much lower frequency range. Everything is chosen very specifically to maximize the frequency range for this type of music. It’s very tuned for this type of music.

Tell me about the warehouse you’re using to throw these events.

It’s a warehouse in Gordon Square where a buddy of mine runs his motorcycle company. I’ve been working on this for years — teaching myself sound engineering — and he said, "Look, whenever you get it finished we’ll do a party here." 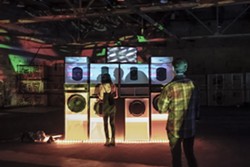 
What’s going to be different from each show to make people come back?

We’re opening up different areas in the warehouse each time. For this first time we’re doing it one of the larger spaces. It opens up to this really nice outdoor courtyard where people can hang out too. The second one we’re going to do will be on the beautiful rooftop patio, which has a nice view of the lake and downtown. There’s 45 to 50,000 square feet of other spaces in the warehouse that we can just keep opening up more and more spaces.

Who is playing at the Launch Party, and is anyone going to have a residency?

The Steel Yard crew will be the only real residents of the system, which is me and a couple of friends. For this first one, we’re bringing in Fundamental Sound, three guys from Roots Records in Columbus. We’re also bringing in Werd2jaH from New Orleans; he’ll be our toaster MC for the night. And then we’re bringing an artist from L.A. called Roommate, the headliner, which is somebody I am so excited about because I’ve been wanting to bring him to Cleveland for almost 10 years. And to finally be able to make it happen and have it happen on the system is a dream come true.

Steel Yard Sound System has already tested out their system and venue, but the official Launch Party takes on June 17 with early bird tickets going for $15. Scoop up tickets over at Eventbrite.