The Birdman Has Landed 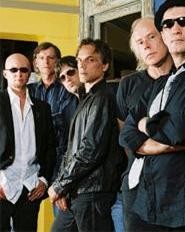 This is a noteworthy event. Birdman is (along with the Saints) the Australian analog of the Sex Pistols or Ramones, having inspired hundreds of reverent bands. But that's not the reason.

Nor is it because Birdman's '77 LP Radios Appear is a classic, built on the heavy riffs, toughness, and old-school fire of the MC5 and the Stooges. (Birdman guitarist Deniz Tek grew up in Ann Arbor, Michigan, and saw both groups often before migrating Down Under to study medicine. When he left, he purchased a guitar from MC5 guitarist Fred "Sonic" Smith. He's still using it.)

And it's not because the reformed group (four out of the six original members -- the rhythm section is new) just released Zeno Beach, its first LP since Living Eyes, recorded in '78 and released in '81. Or that Zeno is fantastic, picking up right where Living Eyes left off.

No, the amazing thing is that the band is making its first-ever appearance in the U.S.

It seems as if this must be an error. "Well, yeah; we were supposed to come over in 1978," recalls Tek, via phone from Sydney. "We were supposed to do a long tour there for six months with the Ramones. We went over and did the U.K. and Europe with the Flaming Groovies. Then we were going to record our second LP in Europe, take a little break, and then do the U.S. But instead we ended up getting dumped from Sire."

Sire had apparently already lost Birdman's distribution deal in Europe while the group was on tour there, paving the way for its demise.

"Because of that, our LP was never put in stores in Europe," Tek continues. "We did this long, hideous tour of six cities every week, and people would come up after gigs and say, 'Gee, do you think you guys will ever record an LP?' We knew it was sitting in boxes at the warehouse and it was never shipped. So we were penniless that tour, and after we finished [recording Living Eyes in Wales and broke up], we still had to find a way to get back to Australia!"

Birdman reformed 18 years later, in 1996, with all six members. The band has toured Australia and Europe with modest regularity since. Yet it still eluded the siren call of America -- even after the pump was primed by 2001's choice retrospective, 1974-1978: The Essential Radio Birdman on Sub Pop. The subsequent album finally made things happen.

"The new LP has made a world of difference, opening doors for us. Having new material -- it changes it from being a nostalgia act, being a tribute act to yourself, to being a real functioning band. And now it also adds up, numbers-wise, because we can go across the country on the way to Europe," Tek says.

A native of Michigan, the surgeon and navy pilot (no joke!) has lived in Montana for a few decades and tours the U.S. with his own post-Birdman projects, including the Deniz Tek Band, with the Stooges' Ron Asheton and Rationals singer Scott Morgan, and Dodge Main, with the MC5's Wayne Kramer and Morgan. But for Tek, to tour the States with Birdman is to realize a dream deferred.

"It is almost dreamlike in quality, " he agrees. "It's a milestone that we had to get to, an 'X' in a box that's been sitting empty for so long. And I probably won't believe it until we actually get there and start doing it; it's been out of reach so long. But people do know us; when I play in America with my group or Scott or Wayne or [Deniz Tek & the] Golden Breed, people come up, and they know about Radio Birdman -- that's why they come. It's been nice to say, 'Okay, I will play "I-94" [Tek's Birdman song about the Michigan interstate] for you, but this isn't Radio Birdman.' So now it will be really nice to be able to do it with the band!"

The other dreamlike experience was the recording of the third Radio Birdman album -- 28 years later. Busy as he must have been co-producing it, was he looking around, thinking Pinch me, this is unbelievable?

"Yeah, there were lots of times I did that! Or it would usually be after going home and having a drink, after a whole day in the studio, and thinking about it. 'Oh my God! By what divine providence is this actually occurring?' If someone had said that in the last 20 years, until two years ago, I would have said there was just no way. That could never happen!"

But Zeno Beach is out, and it's tremendous. It'd be superb just for the opener -- "We've Come So Far (To Be Here Today)" -- and the album-closing surf-punk title track (2006's answer to the Birdman classic, "Aloha Steve and Danno"). True to the group's legacy, all the familiar elements are in place: Tek and Chris Masuak's stinging, garage-style licks, Rob Younger's rough, vibrant voice, and especially Phillip 'Pip' Hoyle's rollicking piano and organ.

But after a quarter-century, it's bound to be a different experience.

"Yeah, when we were young and had no jobs, we used to rehearse every night and hammer this out. Now, we were getting together every other weekend, six hours. We did that for a couple of years to get this together. But the hard part was all done before we went in, writing the songs and rehearsing and arranging them. We wrote 25 or 26 songs and had to pick. But then it went so fast and so easy; we'd rehearsed it so well. And there weren't any dramas or hassles or baby crying moves," he laughs.

Ah, maturity. Now, finally, we can all witness one of the most important and influential bands in Australian rock history, both live and on record. Who knows? After waiting three decades, we may not have another chance.