With Hello Goodbye, Hit the Light, and David Melillo. Tuesday, December 13, at the Grog Shop. 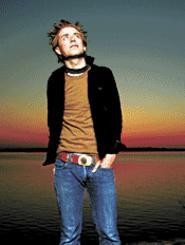 The Rocket Summer Bryce "The Rocket Summer" Avary knows the importance of being earnest. Hello, Good Friend, the staggeringly sincere release from the 22-year-old piano-plinking pop crooner, charms gleeful teens for whom angst is, like, so 2002. Here's how the Rocket Summer compares with his emotive, abstract-monikered peers.

Act: The Rocket Summer
Look: The Hello, Good Friend cover shot of a dorky dude with frazzled hair, a turquoise T-shirt, and a pink guitar could pass for ironic indie album art, but it's really him.
Lyrics: "Beautiful colors, they come from you/So this one goes out to the reds and yellows and blues."
Sound: These tunes conjure images of a Care Bear using a rainbow as a fun slide.

Act: Bright Eyes
Look: Conor Oberst lands on the barely male side of the emaciated androgyny scale.
Lyrics: "I wish I had a parachute/'Cause I'm falling hard for you."
Sound: Bob Dylan, if his voice were garbled by violent sobs instead of nasality.