50 Years Ago, a Small Town Ohio Policeman Chased a Flying Saucer Into Pennsylvania... And It Ruined His Life

James Evans, Dale Spaur's son
We met at Mike’s Place, the greasy spoon near Kent State with the X-Wing parked out front. It seemed appropriate – it was fifty years ago, this week, that James Evans’ father chased some kind of spacecraft into Pennsylvania. They seated us inside the converted school bus near the back of the place. He ordered biscuits and gravy and told me about what his old man saw, back in 1966.

Dale Spaur was a deputy Sheriff for Portage County in 1966. Big dude – 6’7”. Wicked sense of humor. Former gunner on a B-51 in the Korean War. He was known on the force for having a bit of a lead foot, reprimanded for taking turns too fast in his cruiser on Main Street in Ravenna. He worked the night shift with his partner, Wilbur Neff, known as “Barney” to friends. Spaur was a good cop with a good family – a wife and two boys at home. But everything changed the morning of April 17, 1966.

Spaur and Neff were called out to an abandoned vehicle on the side of State Route 224, near the town of Atwater, at about 5 a.m. It was an isolated stretch of country road, lined with trees. They got out of their cruiser to investigate and that’s when Spaur spotted a glowing craft rising out of the woods. It reached treetop level and then began to move toward them, according to an article that appeared in the Record-Courier the following day. It was shaped sort of like an ice cream cone tipped on its side, a little pointed end sticking up in the back, and it made a sound like “an over-loaded transformer.” When it came close, they could feel the heat baking off of it. Slowly, it started east, down 224. 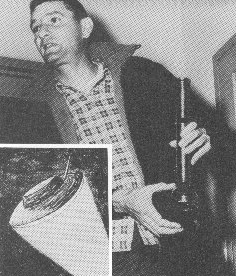 Dale Spaur
The two deputies returned to their cruiser and radioed in to dispatch. The sergeant on duty told them to follow it. The chase was on.

The faster Spaur pursued in his cruiser, the faster the object accelerated. Soon they were speeding east down old Route 14 into the rising sun, the odometer edging past 100 mph. Occasionally they’d have to stop for lights or traffic, though, and when they did the craft slowed down, too, like it was playing a game of “cat-and-mouse,” Spaur would later explain.

Along the way, Spaur and Neff were joined by East Palestine police officer, Wayne Huston, who followed in his own car. They chased the UFO all the way into Pennsylvania, where Spaur was finally forced to stop for gas. Another cop – Frank Panzanella – was already waiting at the service station. The four officers watched the UFO dart straight up into the sky and disappear.

By the time Spaur made it home, the local newspapers had the story. Headline: THEY TAILED A SAUCER 86 MILES! The national news picked it up and
click to enlarge 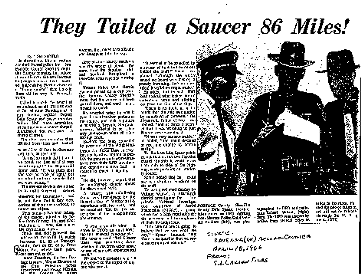 within three days, they were getting calls from Japan. At the station, Spaur and Neff were ridiculed. Neff took it in stride but it really got to Spaur, who lost twenty pounds from the stress of it all. Then men from Project Blue Book – the military’s Cold War UFO-investigation department – arrived. After interviewing everyone, they determined that the object the four police officers saw that morning was the planet Venus refracted through fog.

By all accounts, Spaur suffered an emotional breakdown after this. Within six months, he’d lost his job. His wife left with the children. In October, a Plain Dealer reporter found him living out of a motel, subsisting on peanut butter and jelly sandwiches. “Thirty-four years old and what do I have? Nothing,” he said. “Who knows me? To everyone, I’m Dale Spaur, the nut who chased a flying saucer.”

James didn’t know who his real father was until he was thirteen – after the divorce, his mother remarried and James was adopted by his stepfather. He was watching Good Morning America with his older brother, Dale Jr., when a tall man was invited on the program to talk about flying saucers.

“My mother came in and said, ‘That’s your dad.’” The boys wanted to meet him so Daneise called the television station and the show’s producers passed along her message. Two weeks later, Dale Spaur pulled into the driveway in a big pickup truck. “I remember watching him get out,” said James. “It was like he unfolded out of the truck when he stepped out, he was so big.” During his visit, he told his boys about his adventures since leaving Portage County.

It had taken time, but Spaur had finally gotten his life back together. Not long after that reporter found him at the motel, Dale moved to West Virginia, where he worked in the mines. He had a terrible accident there, falling seventy feet down a shaft, breaking his back. He lay in a coma in the hospital for several days, eyes wide open but completely out of it. “A nurse was supposed to sit with him the whole time,” said James. “But she only lasted a couple hours. I guess she came running out of the room, screaming, ‘This man is possessed by an alien!’”

When he recovered, Spaur moved back to Ohio and settled in Rocky River. He remarried, opened a bar called the Avenue at West 65th and Detroit Road in Cleveland, and on rare occasions told stories about the UFO he called “Floyd,” which he claimed visited him sometimes when nobody else was around.

Later, he did a little consulting for Stephen Spielberg’s movie, Close Encounters of the Third Kind, but walked off set in a huff after he found out the main character was not a cop, said James. The film opens with a police officer chasing a UFO shaped kind of like an ice cream cone on its side.

Spaur died on April 4th, 1983, never recovering from severe pneumonia after catching the flu. James remembers an endless stream of people he’d never seen before at his father’s funeral. He never knew his father had so many friends.
“I look up and five Eskimos are standing there. Where did they come from? How did they know my father?”

I asked James what he thinks after all these years. What did his father see in the skies above Portage County fifty years ago?

“He believed what he saw was extra-terrestrial,” said James. “I believe him. Nothing we made could fly like that. In Pennsylvania, it hovered over his car. He could feel the heat coming off it. Then it went straight up and disappeared. Poof. Gone! And remember, my father served in the Air Force. You couldn’t put a bird up there he doesn’t recognize.”

If there’s definitive proof, the military has it. Spaur and Neff kept a camera in the cruiser. They took dozens of photographs. But when Blue Book came to town, the G-men confiscated the negatives. They have never been released.

Further reading:
http://www.nicap.org/portage.htm
https://www.youtube.com/watch?v=WJP8OxZr2kE
James Renner is a journalist and author of thriller novels, including The Great Forgetting. His latest book, True Crime Addict, the nonfiction account of his search for missing Umass student Maura Murray, is available for preorder and will be released May 24. http://jamesrenner.com