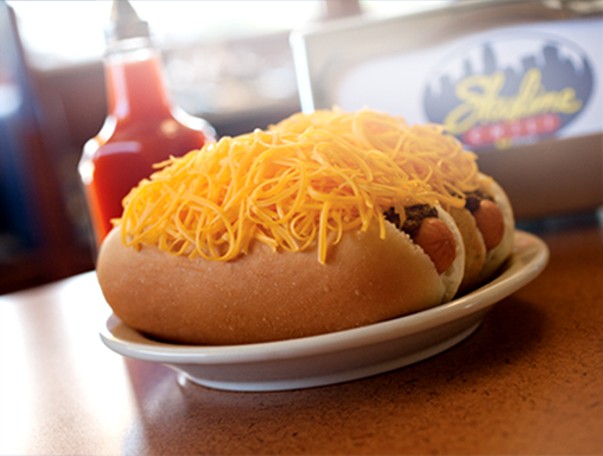 Courtesy of Skyline Chili
After Ben Cohn's friends dared him to eat an entire party sub by himself on New Year's Day, he declined the challenge but swore to instead eat 400 Skyline chili-topped dogs before 2018 was over.

In case you're not privy to Cincinnati's Skyline chili, it rivals the pierogie and the buckeye chocolate as Ohio's greatest culinary contribution. It's a chili with a hint of cinnamon frequently served over hot dogs or spaghetti noodles, not joking.

Regardless, Cohn loves the regional treat and told WLWT5 that he was picking up Skyline so frequently, the workers could all recognize him by voice and his traditional order of "four cheese coneys, no onion, no mustard."

Cohn reportedly spent 291 days consuming a daily average of 1.37 Skyline coney dogs, though he didn’t eat one daily. While the Harrison location was his typical spot, he did snag some dogs during baseball season at the Great American Ballpark during Cincinnati Reds games. If Cohn took a day off, he would make up for it by consuming 4 to 10 coneys in a single sitting.

In honor of his accomplishment, his mom embroidered a shirt and Skyline Chili corporate sent him a gift basket in appreciation.


If you are up to challenge Cohn's record, the Cleveland-area has its own Skyline Chili restaurants in Brooklyn and Lyndhurst.