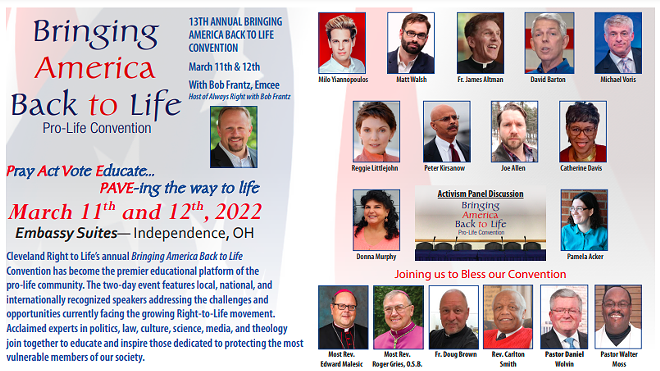 The Bishop of the Cleveland Catholic Diocese, Edward Malesic, will say a few words and offer a prayer this weekend at a local pro-life convention headlined by toxic "ex-gay" far-right provocateur Milo Yiannopoulos.

The convention, "Bringing America Back to Life," will take place at the Embassy Suites in Independence Friday and Saturday. Its program features an array of Christian nationalists and conservative media commentators whose positions on immigration, communities of color, Islam and the LGBTQ community would be considered by most observers—in the gentlest possible language—controversial.

Yiannopoulos is co-headlining with Matt Walsh, a podcaster within the Ben Shapiro pustule whose big thing is being anti-trans.

Citing Catholic doctrine, the Diocesan spokesman said that each life is a gift from God and that we are called to revere every life and love our neighbors as ourself.

"It is our responsibility to care for and protect human life, especially the lives of the most vulnerable among us," the spokesman said. "Abortion directly attacks life itself, takes place within the sanctuary of the family, and has resulted in millions of human lives destroyed."

One wonders if that particular view is shared by Fr. James Altman, the "firebrand reactionary priest" from Wisconsin who is also appearing at the convention and whose allegedly pro-life positions include trivializing lynching.

Altman "is the clerical darling of the racist, misogynist Catholic radical right," wrote one Catholic commentator in 2020. And his sermon on lynching may have been "the most viciously racist and anti-life sermon I have ever heard by any clergy of any denomination."

Like many of the other speakers at the Embassy Suites event, Altman believes that both climate change and the coronavirus pandemic are hoaxes and is militantly opposed to vaccines.

Recognizing that this ship has sailed, if the Catholic Church wants its views on the "sanctity of life" to be taken seriously, its leaders should stay the hell away from far-right political pageants with pro-life branding like this one. And they should certainly refrain from legitimizing such theatrics with solemn benedictions and references to God's teaching and so forth.