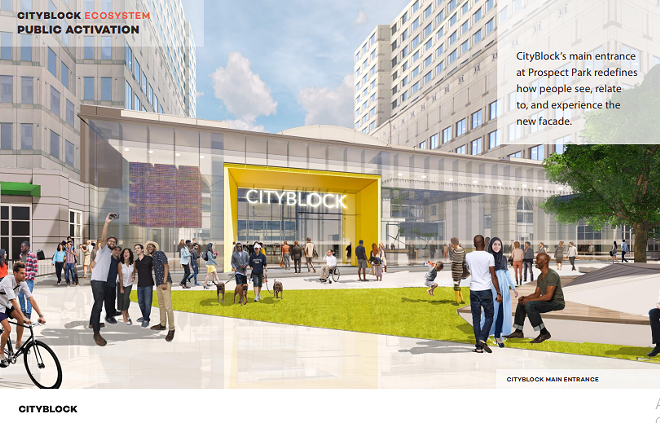 Leaders of the Blockland initiative unveiled reconfigured plans for the Tower City development they've dubbed "City Block" Wednesday in a presentation that showed how significantly the flagship project has evolved.

"At first, we were focused on a tech hub or traditional incubator," Pinney said. "But after input, it occurred to us that we needed to think broader and bigger. It's a lot of work, and there's still a lot of work to do."

City Block will now be focused chiefly on "entrepreneurship," a term presumably broad and big enough to encompass pretty much anything. Per a July press release from Dan Gilbert's Bedrock Detroit, which has given a tentative green light to the project, City Block will be a 350,000 square foot entrepreneurial center that aims to transform the heart of the city into "a buzzing cross-section of entrepreneurs and services."

But as yet, even with this capacious terminology, there are still no confirmed tenants, according to Pinney. He said Wednesday that leaders were "close to" inking commitments from some of their first tenants and were waiting on a commitment from a "big-name" company—which of course may or may not be true—and he told folks who attended the meeting at cleveland.com that they may be asked to contribute by renting space there.

Moreno acknowledged that he's had to adjust his personal thinking on City Block as well. He said that a year-and-a-half ago, he envisioned the space as a campus setting with start-up teams eating pizza as they coded at monitors round the clock.

Now, the dramatic transformation of the Avenue at Tower City is mostly physical. Conceptual renderings provided by Vocon depict an urban parkway on Prospect Avenue and what look like Penrose Staircases of skywalks through the atrium.

City Block is designed to be both a public and private space that keeps the Cleveland Cinemas theater, honors the importance of the central transit hub and offers restaurants, retail, gathering spaces and private amenities for companies and City Block members alike. 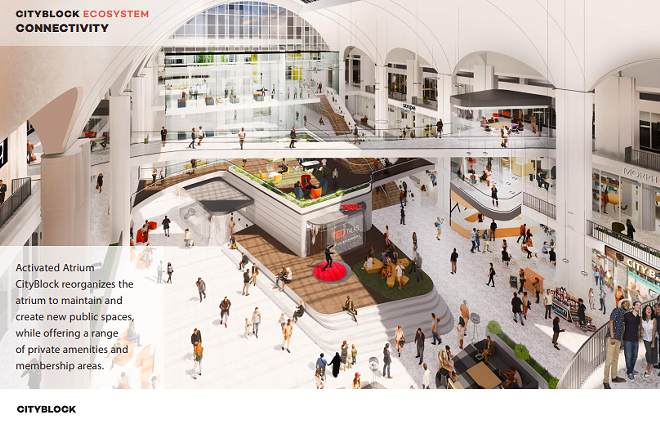 What is an "entrepreneurial center," what is "a buzzing cross-section of entrepreneurs and services," if not a mall? It's a futuristic mall, no doubt, with an aspirational design and flavor that's very neat to look at and think about. But it's worth remembering that this pie-in-the-sky project, the first phase of which Pinney said would cost upwards of $100 million, retains only trace elements of the vision that Moreno and Pinney had been promoting through 2018.

(That vision was promoted, by the way, with the exuberant cheerleading of the region's corporate and civic leaders, whose attention deficit disorders never fail to stun. Those leaders are now by and large devoting their energies to promoting Cleveland Rising, another corporate-sponsored initiative which hosts its meetings at cleveland.com.)

Unmentioned during the City Block presentation Wednesday was the word 'blockchain,' for example, which is striking in the following respect: Blockchain was originally the whole point. The name of the project, City Block, was a cute little civic double entendre. It was not even 18 months ago, remember, that Blockland's leaders stood on a stage and instructed Clevelanders to learn and embrace this purportedly revolutionary technology, teasing that soon Cuyahoga County would be the first entity in the nation to adopt blockchain birth certificates and so forth. City Block was to be where all the emergent blockchain start-ups would converge and explode. There were obviously no successful blockchain companies interested in renting space, so the vision broadened. Fair enough.

But even the idea of tech is now being soft-pedaled.

"[City Block] is an entrepreneurship center," said Pinney, "not a tech center."

Also nowhere to be found in the current design is "Genesis," the imaginary CMSD school which was to have been a key component of City Block and was absolutely central to Bernie Moreno's view of Blockland as an initiative that would make Cleveland a center of innovation for all. (It goes without saying that assent from the school district ought to have been a prerequisite.)

The project's incubator amenities for now include "2000+ desks"  "16 innovation boxes," "30 meeting rooms" and "50 residential pods" — lingo for a "co-working space" with "conference rooms" and "studio apartments" — and are intended, as in the original conception, to create collisions among innovative workers and thinkers. But City Block's wobbly evolution means that some or all of these amenities might not be in the next round of conceptual renderings. Moreno repeatedly stresses that these are just ideas; that these are "aspirational" designs. And we should take him at his word.

Creating the urban parkway on Prospect, to take one example — WHICH LOOKS VERY COOL! — would require dealing with a traffic engineering department that has been notoriously hostile to non auto-centric street uses, and the same sluggish, petulant administration that still hasn't removed unsightly Jersey barriers from Public Square. Taking a street off the downtown auto grid would be, in Pinney's words, "a very heavy lift."

In the same way that the Medical Mart, which was supposed to be a "Disneyland for Doctors," became a very expensive banquet hall perpetually on the hunt for thematically aligned office tenants, City Block, which was supposed to be the world's "largest and most advanced technology and entrepreneurial ecosystem hub," could end up being a very expensive mall, perpetually on the hunt for its own thematically aligned office tenants.

Bernie Moreno is still preaching equity, (in the fad-like way that all civic leaders have adopted the rhetoric of "inclusive prosperity"), and said Wednesday that focusing on entrepreneurship was more inclusive than focusing on tech. This may very well be true.

"This is a broader vision of Cleveland," he said. "If you could take half of our citizens who are living in poverty and turn them into successful middle-class citizens, how many Amazon headquarters would that be worth?"