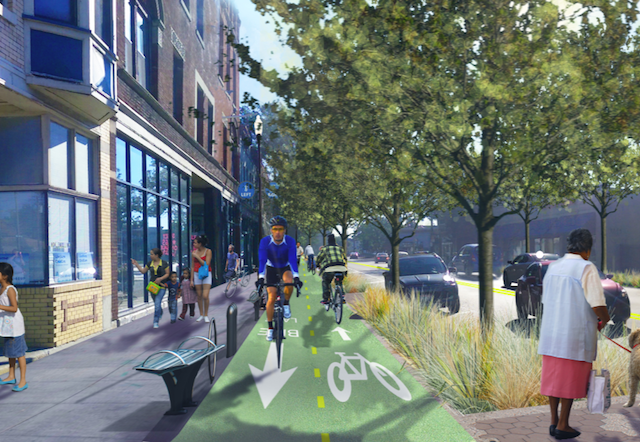 The Superior Midway, the long-delayed, seemingly elusive 4.3 miles of protected bike lanes to link Public Square and Midtown, was approved by Cleveland City Council yesterday in its first session of the new year.

Council simultaneously approved the Lorain Avenue resurfacing, a 1.8-mile makeover of a growing Ohio City transit connector from West 20th to West 65th. The projects are collectively estimated to cost some $54 million, with heavy reliance on federal dollars — three-fourths of the Midway's costs — to greenlight them into existence.

The city's emergency ordinances authorize James DeRosa, its director of capital projects, to receive state or federal funding to cap off the remaining $10 to $15 million needed for the Lorain project.

Councilman Kerry McCormack's Ward 3 includes roughly three miles (West 50th to East 12th) of the planned lanes. He said that council's affirmation positions a "shovel-ready" pair of transportation plans as closer to ready-to-go for, in his words, "getting it paid for."

And, culturally speaking, to shift two major transit corridors a bit from their reliance on cars.

"This is a significant step forward advancing the spine of multi-modal infrastructure throughout the core of the city," he told Scene. "And think about it: These roads used to have streetcars. In a way, we're getting back to [the basics]." 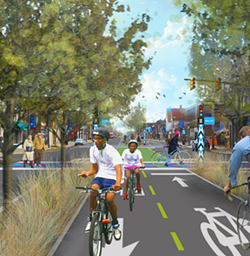 Cleveland Planning Commission.
Rendering from Bialosky’s Midway plan. Jacob VanSickle, director of Bike Cleveland, said it's key that both the Lorain and Superior lanes be designed and carried out "in tandem with one another."

With the first proposals being made all the back in 2013, the Superior Midway and Lorain Avenue plan seems to be a sort of holy grail for Cleveland urbanist cyclists, yet beset with funding quagmires and design gaffes. In January 2018, a month after a planning study was submitted to the city and NOACA, the latter agency awarded the Midway project a $8.3 million grant. Four years later, a similar grant added $11.3 million.

But Lorain Avenue's project, which will most likely catch up to Midway's with federal dollars, seems to have had more difficulties securing capital, along with running into a slight identity crisis in 2021.

Jacob VanSickle, the executive director of Bike Cleveland who's championed both lanes' importance since 2013, and lobbied for NOACA funds in 2017, said it's significant council codified both projects together, on the same evening.

"Our opinion has always been that [they] should be built in tandem," he said in a phone call. "The point is so that they feel like they're a part of the same network."

Both projects, according to recent renderings, contain plans for street resurfacing, new curb ramps, pedestrian signage, in addition to miles-long, separated bike paths flanked by trees. With progress, and a new $400,000 earmarked by Congresswoman Shontel Brown, for the nearby Loop lane — which will link Downtown with Ohio City — it's possible that, by 2025, cyclists will be able to coast from East 55th to West 65th without fear of being run off the road.

But therein lies the (short-term) rub for drivers.

Bike lanes like Midway's often require months to a year of necessary street closures, and could spell traffic slowdowns that annoy motorists, however good for the environment they may be.

Even so, with both streets being exceptionally wide — Superior is 72 feet from curb to curb — and rush-hour-friendly, people like McCormack see the pros undeniably outweighing temporary, if not illusory, cons.

"Construction disruption is a necessary evil and a pain in the tuchus," he said. "Yes, this infrastructure is going to be a pain, you're going to get frustrated. But once it's built? You'll think differently about it."

Editor's note: A previous version of this story provided the incorrect name for the congresswoman who earmarked money for the Loop lane. We regret the error.