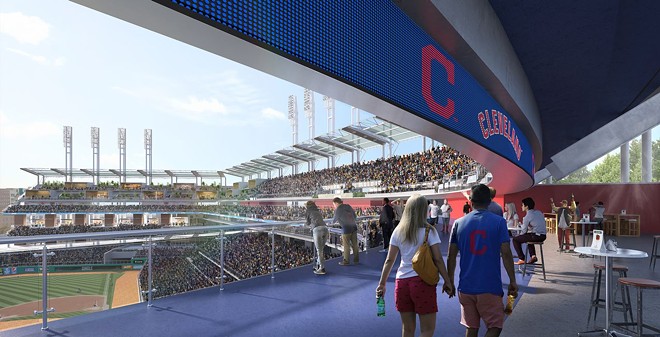 In February 2013, nine months before his second re-election, Mayor Frank Jackson announced a new vision for how the city of Cleveland would go about hiring for public projects.

"When we spend money, we should be spending it with ourselves," Jackson said that Feb. 26th at City Hall. "When we do that, we can turn dollars around in our community in a way that will stabilize employment."

Jackson's ideas of stabilization followed a handful of "aspirational goals." Of developer hires, at least 15 percent should be minorities, seven percent female, and 8 eight percent small businesses. As for city projects, 20 percent of the workforce should be Clevelanders.

Solidifying Cleveland's new Community Benefits Agreement, Jackson predicted, "could take a decade or more to achieve." These were suggestions, after all.

A year later, the Ohio Supreme Court dealt the city a blow in striking down a separate but related Cleveland ordinance, the 2003 Fannie Lewis Cleveland Employment Law, that required companies with $100,000 or more in contracts with the city to hire Cleveland residents for 20 percent of the construction hours.

About a decade after Jackson set such standards, which aimed to "reframe the public discourse" as far as divvying up Cleveland's meatiest construction projects, especially those backed by taxpayer dollars, CBAs are still largely voluntary for the recipients of the public's largess. For it to have teeth, and to make an actual difference, means codifying an ordinance with requirements, not goals.

Council president Blaine Griffin told Scene the topic is on the table for early 2023.

"We're talking with [minority and women-owned companies] right now," Griffin said after a Monday press conference last month unveiling the renovation of the Kovacic Rec Center, part of which was funded by the Cavs as part of the team's community benefits goals agreed to as part of the Q Deal. "We want to get input from them, to see how this [legislation] should be structured. To answer questions like, 'What should be the threshold before project labor agreements kick in?'"

CBAs, which were a policy ideal championed in Justin Bibb's mayoral campaign, urge
private companies to act on "good-faith efforts" to report demographic data on their workforce hires, from designers submitting sketches to subcontractors pouring concrete. They are goals for the most part, except for rare, specific requirements agreed to with government entities as part of economic incentive packages, usually dealing with the number of city or county residents employed on a project.

Cities and counties across the country have, in varying degrees, tried to enforce CBAs, with varying results.

The Guardians' $435-million Progressive Field renovation project, which includes some $285 million in public money ($255 million from Cleveland and Cuyahoga County, $30 million from the state of Ohio), set CBA goals relatively in line with recent projects like Sherwin-Williams and the Rocket Mortgage FieldHouse, but slightly above them and what the city's memorandum suggests.

"We did [ours] intentionally to push ourselves," Neil Weiss, the Guardians' Chief of Ballpark Operations, told Scene. "We feel that we could do better than what those numbers are today—our goal is to excel and beat all of them."

In April 2019, the Gateway Economic Development Corporation announced that Whiting-Turner's 1,600 workers on the 250,000-hour build of the Rocket Mortgage FieldHouse transformation exceeded the city's CBA, with 4 percent more Cleveland hires and 9 percent more minority hires than suggested. (Yet one percent fewer female workers.) And, although Sherwin Williams was criticized by the Black Contractors Group, one of the original memo's signatories, for being slow to hire minority construction companies and workers, the paint company eventually revealed its hiring tactics met the guidelines, to the percentage point.

Whether or not the Guardians meet their goal swill be determined a few years down the line when construction is complete for opening day 2025.

As the process ramps up, Weiss and the team formed a 22-person Community Review Group to "ensure there is a regular forum" to keep these numbers in mind. The inclusion of Councilmen Blaine Griffin and Joe Jones, Weiss added, will ideally pave the way for an ordinance to "enforce" what the Guardians preach.

"The idea is to put a little more meat and guidelines and guardrails behind any project that participates with public dollars," Weiss said.

But with the Ohio Supreme Court's decision to strike down the Fannie Lewis law, it's unclear what teeth the city can put behind an ordinance.

"It's one of those things that, if you don't meet it, there aren't any damages, no punitives," Andre Bryan, head of APB & Associates, a firm that advises Northeast Ohio companies on CBAs, said. "It's [more] like, 'Oh okay, I tried my best,' and just keep moving on.'"

Despite the ruling, some of Downtown's costliest builds have sourced firms like Bryan's to commit to their own, at-will CBAs—often going above and beyond the 2013 "good-faith" numbers. "I'm forthright on the topic as to why," Bryan told Scene. "In order for economic development to happen, we got to remove the isms—racism, sexism, nepotism." 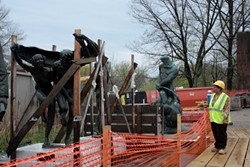 Ariane Kirkpatrick
Ariane Kirkpatrick at her job at the Cleveland Museum of Art in 2009.
Such added meat trickles down to practicalities for the AKA Team, one of the companies Bryan  recommended for work  on the Progressive Field renovation.

For Ariane Kirkpatrick, who founded AKA with her family in 2009, CBAs have resulted in concrete growth points over the years. What started with an $18,000 construction trailer cleaning contract with the Cleveland Museum of Art turned into, in 2015, managing $1-million builds for the Cleveland Clinic.

In less than a decade, a five-employee operation out of Kirkpatrick's home in Lee-Miles ballooned to a 98-person construction company—including waterproofers and electricians. This year, Kirkpatrick gloated, AKA is moving into their biggest space yet: a 50,000-square-foot complex in the Jabali Building on East 55th and St. Clair.

With the Guardians job locked down in early December, Kirkpatrick has come to find more of an extemporaneous notion of joy, besides AKA's growth and financial health. The shift to more projects embracing CBAs has led to an increase in minority construction education, she said.

It crystallized for Kirkpatrick at a company meeting last month ahead of the Progressive Field work.

"You know, I was there, I looked around the room and saw a majority Black and brown people," Kirkpatrick recalled. "And I just started crying because it was so beautiful. It was just a beautiful sight to behold."