Since the death of George Floyd in Minneapolis, a wave of protests, including the one in Cleveland, have taken aim at police use of force on Black residents.

In Cleveland, there have been only a handful of fatal police shootings since the death of 12-year-old Tamir Rice devastated the city in 2014. With such a small data set, it’s hard to draw sound conclusions about how Cleveland police are using lethal force.

But police take the first step toward a lethal shooting on a daily basis. Cleveland police overall drew their weapons at least 900 times between January and July 2020, according to data from the city’s dispatch system.

That represents a tiny percentage of the 214,000 calls fielded by officers in that time. But the data reveals disparities across the city in how often police draw their weapons.

Police in Cleveland’s District 5 – where the population is overwhelmingly Black – are about twice as likely to draw their gun while responding to a call than the citywide average, according to a Scene analysis of dispatch call data covering January through July 2020.

The Cleveland police department makes the past week of dispatch data available through an online map. Ohio City Inc. board member Angelo Trivisonno built a scraper in Dec. 2019 to capture the data before it disappears, and then made it available to a reporter.

Cleveland’s dispatch data includes dozens of different codes indicating what happened when police responded to a call. This field in the database shows whether police made an arrest, if they made a report, or if they didn’t find anyone at the scene. Some calls show disposition codes “UNHOL,” “UNHOL1,” “UNHOL2,” and “UNHOL3.” A document provided by Cleveland police indicates that “UNHOL” means an officer unholstered their weapon.

A study of the New York Police Department in 2008 noted that unholstering a firearm increases the chance that it could go off accidentally, that a suspect could take it from the officer, or that “reflexive” or “contagious” shooting could happen, where officers open fire because they’re startled or another officer starts shooting. 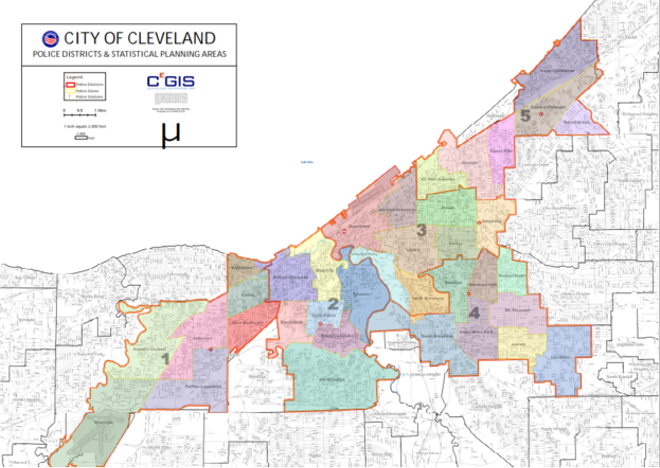 All of those were higher than the citywide rate of four per 1,000 calls.

And where and why police drew their weapons seemed to have little to do with how dangerous a neighborhood or situation was.

While a high percentage of District 5 calls reported shots fired compared to the rest of the city, District 5 police were more likely to draw their weapons than other districts on the same kinds of calls. 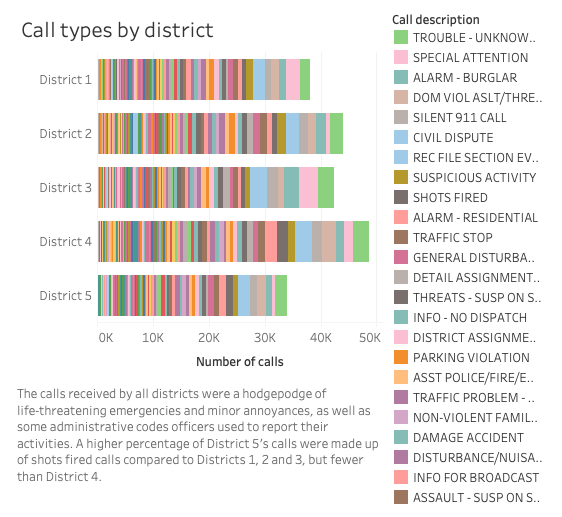 Across the city, police were more likely to draw weapons when responding to calls labeled “PLACE ENTERED-SUSPECT ON SCENE” than any other kind of call except bank robberies. They unholstered their guns on about 8% of “place entered” calls. But District 5 police pulled their guns on 16% of those calls. 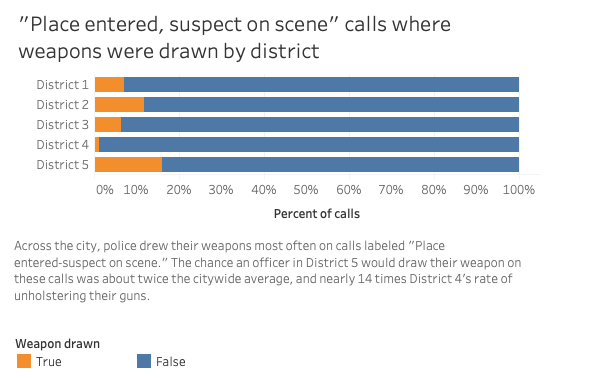 Glenville, St. Clair-Superior and Collinwood-Nottingham all had higher-than-average crime rates compared to the rest of the city, according to 2017 data from the Cleveland Neighborhood Progress Index, but the violent crime rates in Euclid-Green and North Shore Collinwood were below the city rate.

And all of them had lower crime rates than the downtown statistical planning area, where police drew their gun on just one of every 1,000 calls. (Most downtown calls were answered by officers from District 3.) 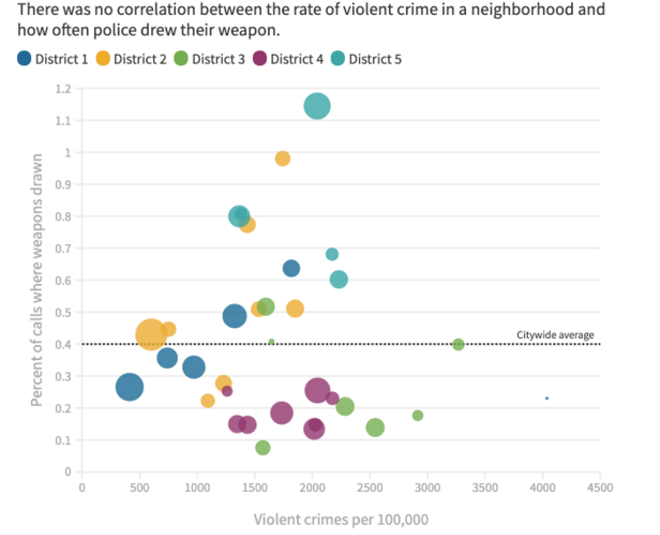 “Crime rates just don’t ever predict officer use of force,” she said.

Research, she said, has shown that police use of force, especially fatal incidents, is tied much more closely to the prevalence of minorities in a city.

The neighborhoods in District 5 are all more than two-thirds Black, according to data from the Center for Neighborhood Progress. Glenville, where police drew their weapons most often, is 93% Black. (The city as a whole is only about 50% Black.)

In cities like Cleveland that are highly racially segregated, Kent said it’s hard to predict whether police will enforce high minority neighborhoods more or less aggressively than mostly white neighborhoods.

“Sometimes I find that, in cities that are very segregated, you might have fewer police shootings,” Kent said. “It’s a theory of what they call ‘malign neglect,’ where people are saying, ‘Well we’re not even going to bother.’”

While District 5 contains some of the most heavily Black neighborhoods in the city, several Black neighborhoods like Hough and Lee-Seville fall under District 4. In those areas, police reported drawing their weapons at a rate far below the citywide average. In Mount Pleasant, a District 4 neighborhood that is 97% Black, police drew their guns on 1.3 out of every 1,000 calls – about an order of magnitude less than officers did in Glenville. 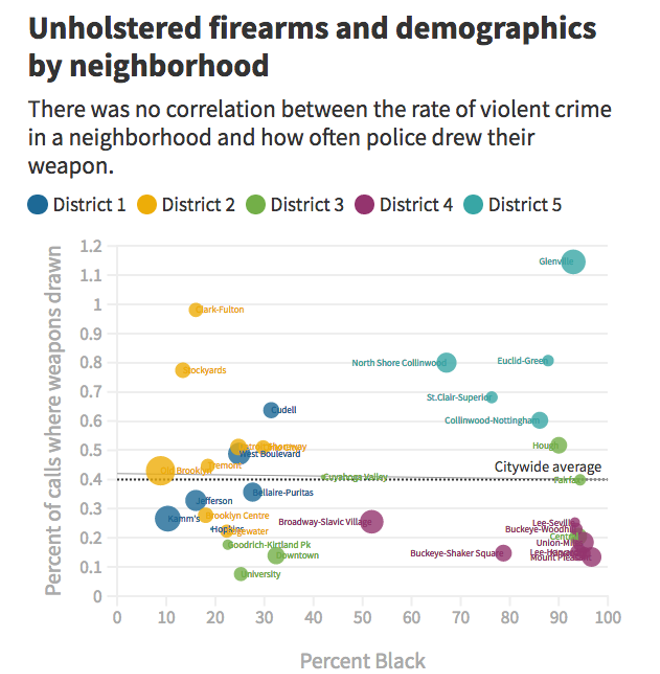 Kent said the disparities between districts probably weren’t caused by training because police training is the same for the entire city. She speculated it could be affected by which officers were assigned to District 5 and their seniority or background.

The average patrol officer has been employed by the city for 14 years, according to payroll data from the city. Patrol officers who appeared on a roll call list for District 5 had worked for the city less than seven years on average.

The database includes unit numbers for each of its calls, which appear to correspond to car numbers. 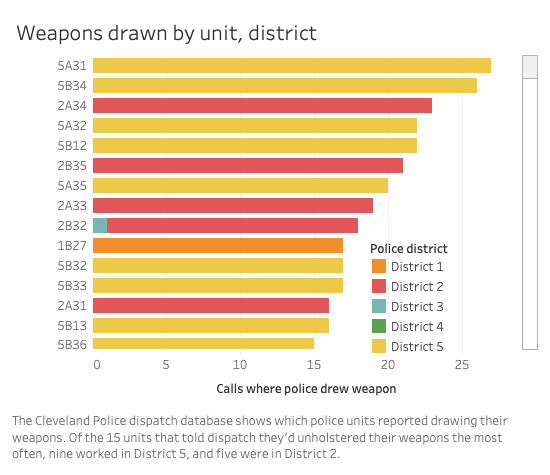 The unit that reported unholstering a weapon the most frequently was 5A31. As of August 17, that car number was assigned to Elaine Ciacchi, who has been on the force for nine years, and an officer named Robinson. First names aren’t included on the assignment roster, and there are several Robinsons in the department.

Officers tend to be assigned the same cars on a regular basis, though assignments can change if, for example, a car is out of service for repairs.

The 5A31 unit reported pulling a gun on 27 calls since January, a rate of about 28 times per 1,000 calls. The types of calls where the officers with car 5A31 drew their weapons ranged from “general disturbance” calls to shots fired and one hostage situation.

The officers in car 5B34, which reported unholstering their weapons second most, were listed as Hamel and Lyons on the August roster. There are four different officers named Lyons on the force, but only one Hamel. Tiffany Hamel has been working for the department for less than two years.

There is a delineation in city records between simply drawing a gun and pointing it at someone.

The report classifies incidents as Level 1 through Level 5, with Level 5 being the most serious incidents. The city’s Use of Force report classifies times when an officer pointed their weapon at someone as a Level 1 incident, on par with pushing, tackling or restraining them. And a third of the people Cleveland cops pointed their guns at weren’t resisting, even passively, according to the use of force report. Citywide, three quarters of the people on whom police used any kind of force were Black.

Drawing a weapon without pointing it at someone isn’t considered a use of force at all, though department policy requires police to list every time they unholster their weapons in the CAD database.

While unholstering or pointing a gun doesn’t do physical harm, Kent says it may indicate that police are approaching a situation with a hostile stance.

“When [police] encounter the citizens, how [incidents] unfold depends on how they’re starting and how people respond,” she said. “The idea is that if police don’t escalate the situation, people aren’t going to escalate it in return, hopefully.”

In 2017, an encounter with an argumentative citizen parked outside a strip club turned into an hours-long standoff after police drew their weapons.

Police said they approached Danell Hicks’s car because they saw handguns inside. In a complaint he later filed without the help of a lawyer, Hicks didn’t deny that he argued with the police, or that he was intoxicated. But he said what he did next resulted in part from police drawing their weapons as they approached his car.

Hicks said he argued with the police officer who first came to his car window and told him to step outside. “I then noticed multiple officers began to arrive with their guns drawn and aimed to be fired at my vehicle,” he wrote. “With drugs going through my system I immediately became paranoid and feared that officers would shoot.”

Over the course of the standoff that followed, both Hicks and his passenger, Antonio Powell, shot out of the car windows. An officer was wounded in the leg in the exchange. The impasse ended when both Hicks and Powell were shot. In his account of events, Hicks said he later learned he had taken 17 bullets. Both survived, but were sentenced to 25 years each for attempted murder.
Scroll to read more Cleveland News articles
Join the Cleveland Scene Press Club