Cleveland's Most Fascinating Medical Stories: The Doctor Who Became the Patient After Being Shot

Used to treating the trauma of others, the doctor had to confront his own 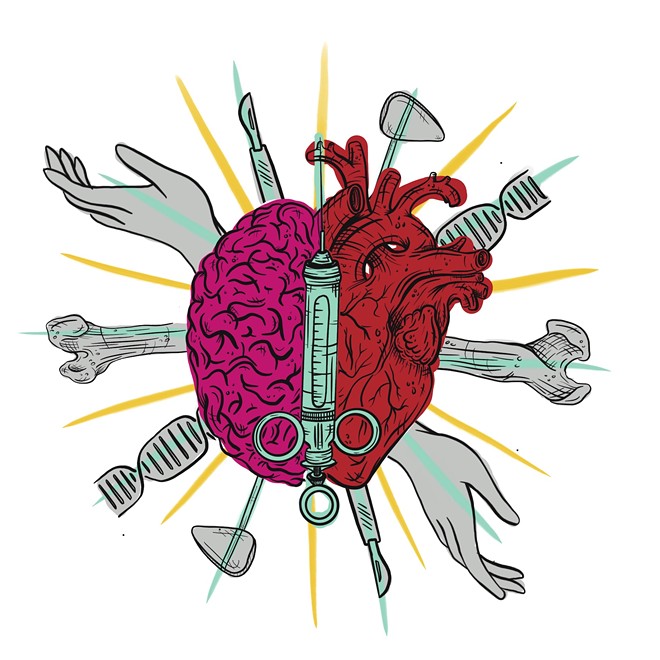 Laying in the grass in the spring Iowa sun, a five-year-old boy dreamed of helping people overcome physical disabilities. His right lower leg was amputated a year before after multiple surgeries to fix the leg did not work.

Fifty years later in Cleveland, Dr. E. Byron Marsolais had risen as an international leader in the field of spinal cord injuries. He was invited by the Mayor of Paris to cut the ribbon at a hospital opening. At the ceremony, a man who couldn’t walk before he met Dr. Marsolais stepped across the stage placing the final brick. Dr. Marsolais’ tireless work with nerve stimulators, blending his engineering PhD with surgery, kept his boyhood aspirations alive. In 1993, a movie was being made that depicted the story of Marsolais’ paraplegic patient, a former marine who was shot, learning to walk again. That same year, in October, PBS’s Scientific American featured Marsolais’ technology. It was shown in Cleveland schools, celebrating the local hero.

Days later, when it seemed no dream of Dr. Marsolais’ was unobtainable, his nightmare would begin. On the eve of Halloween, a man wearing a “Jason” hockey mask and a doctor’s white coat walked through a Cleveland hospital and up to Dr. Marsolais, a .38 caliber pointed from the hip.

“I’m going to kill you because you killed my mother,” said the masked former patient of Dr. Marsolais. Seconds later, after Marsolais felt the gravity of the words and refused to enter into an exam room that would have further isolated the two, the assailant shot Dr. Marsolais. He stumbled backwards, a pain in his abdomen blunted by the surge of focus on survival. Dr. Marsolais had never before been in a fight —  athletics not a trajectory in his life due to his prosthetic leg. But now, blood pooled under the two men as they found themselves in a tangle, punches and lunges leading them to the ground. The mask had fallen off the assailant as he fought to get free from under the doctor. Marsolais didn’t recognize the man, but there he was, pointing a gun up at Marsolais’ head. Only a split second was the difference between life and death, Marsolais hitting the man’s arm as the second bullet grazed the doctor’s scalp.

Dr. Marsolais woke up in an ICU room to a representative of his department informing him that they were worried about the optics of the situation: a doctor fighting a patient. His friend, a surgeon, had just operated on him, removing the remnants of his gallbladder and sewing up his guts. The exit wound was so severe it would remain open for days, too gaping to stitch together.

What Dr. Marsolais remembered last was the most excruciating pain he had ever experienced. A breathing tube inserted into his trachea when he was fully awake caused him to cough uncontrollably. This cough increased the pressure in his abdomen, which had minutes earlier been ravaged by the bullet, obliterating his gallbladder and ripping through his liver and intestines. He remembered the hospital security rounding the corner as he sat alone on the ground. He was clutching the assailant’s pistol he secured after their fight. Finally, someone had come. Then the security guard kicked the gun out of his hand, unsure if he was the doctor or the intruder. Marsolais tried to piece together the traumatic night, his wife now at his bedside.

Flowers were in his room from the film production company. Reporters wanting a chance to talk to the doctor ringed the room while a police chief disseminated the information he knew to the press. His wife reeled at the fact that bail had been set for the attacker at a mere $25,000. Her husband remained quiet, advised not to talk to the press. The work of rehabilitation had begun.

He was used to seven days a week in the hospital, but not as the patient. He required more surgeries, including one on his thumb for a tendon damaged during the struggle. But the worst injury of all was Dr. Marsolais’ spirit. Confused, he thought people hated him and wanted him dead. Following this blast of trauma, unable to process it all, his wife had brought just the right treatment. She sat at his side, wanting her husband to know just how good a man he was and to dismiss this haunting doubt that was creeping in his mind. And so, she read the letters of school children who sent support for the wounded doctor. They had just seen him on TV at school, and they hoped their new hero would heal quickly. He did.

One month later Dr. Marsolais was working back in clinic. For some time after the incident he did wear a kevlar vest under his white coat when walking the halls of the hospital, but this was a temporary crutch. Paradoxically, the best therapy was his patients who loved him dearly. They spent much of their consultations asking how he was doing.

He would operate again for many years, sometimes on patients who also suffered gunshot wounds, but to their spinal cords. Him and his wife continue their work present day with spine surgery national organizations. They still retreat to Iowa regularly where they farm the land. Just like his patients, Marsolais would not let his wounds dictate the terms of his life.

He still thinks about that late October day. He can’t explain why the assailant referred to his mother, who at the time was alive and never before seen by Dr. Marsolais. Thinking back on their rather generic back pain consultation, the motives behind the attempted murder will never be known. He often remembers the moment sitting over the man he had just put in a choke hold, about to wake at any moment. The doctor needed time to escape, and had the gun pointed at the imposter. Marsolais grabbed the barrel of the gun and whipped the man on the head with the handle. Crawling to the nearest phone to call security, Dr. Marsolais left a trail of blood in the hallway.

With trauma, there is often no profound discovery in years of contemplation. Instead, there can be peace. Sitting in his sunroom some 30 years later, his wife and dog at his side, the Doctor speaks quietly. He says, after much thought, that he is lucky.

Dr. Corey Meador is a practicing family medicine physician in Cleveland who has written for PBS NewsHour and The Washington Post. He obtained degrees from Loyola Marymount University School of Film & Television in Los Angeles and Drexel University College of Medicine.