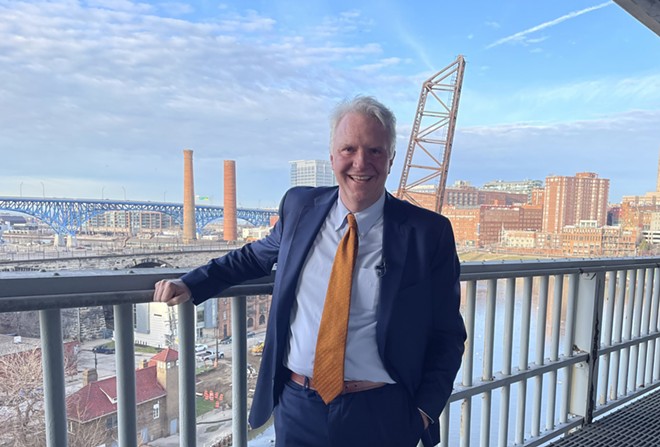 In New York, it's the High Line. In Atlanta, the Belt Line. And in Philadelphia, it's the Rail. (The 'Line' is obviously implied.)

Chris Ronayne, Cuyahoga County's executive, now in his second week in office, has his own revelatory idea for Cleveland's version of the post-industrial urban park:

"But ours will be different," Ronayne says. "It's in the sky. It's more in the sky than the High Line."

Ronayne's so-called Low Line Sky Park, a name apparently conjured this month, is what he sees as the best potential for the vacant, lower deck of the Veterans Memorial Bridge.

The deck hasn't seen much activity since it was last used as a streetcar throughway in 1954. Today it's a 3,112-foot empty walkway, used infrequently as a county tour asset or, in 2019, a kaleidoscopic party ground for the Ingenuity arts fest. In 2011, NOACA orchestrated a design study of the former subway level, mainly envisioning the empty track as a pedestrian-focused bike lane.

In the next few years, Ronayne says, the lower deck's neglect could change. Following similar green-heavy projects like the Irishtown Bend or the Canal Basin parks, a Low Line akin to Atlanta's or New York's could continue to grow the population of Downtown and the inner West Side neighborhoods.

"I think this will create yet another amenity in Cleveland that makes us unique," Ronayne says, "that appeals to a young workforce, gives us another part of our history to celebrate as it relates to the streetcars that ran below." 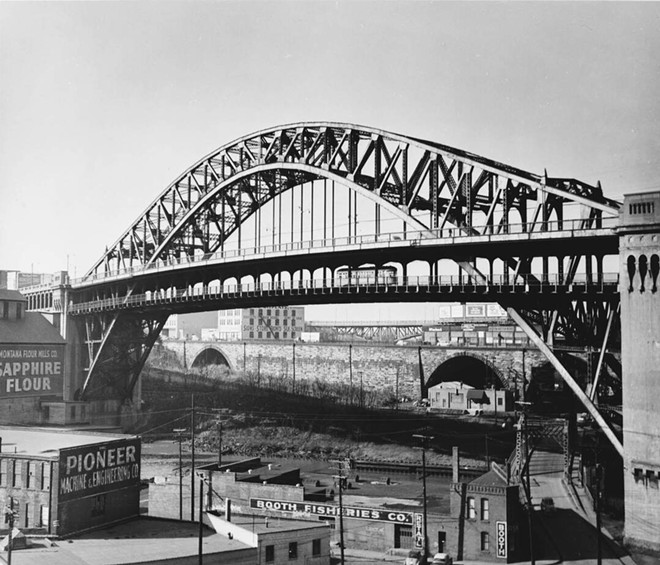 By the 1950s, the Detroit-Superior's subway level grew as a cultural fixation for those who used it to ride from West 9th to West 25th.

"We used to call it the high level — high would be the cars, low would be the street cars," resident Paul O'Neil said in an oral history project of the bridge. "All the kids would get to the back of the streetcar so they could look out and see the river."

But, the storied Clevelander might ask, will it live up to the hype? After all, some 47 miles of the Cuyahoga River — from the Gorge Dam to the tip at Lake Erie — have been an Area of Concern by the EPA since 1987, which could impact buildout and aesthetics. (Ronayne hopes to help delist the river by 2026.)

"First, it's got to feel safe," says Gregory Peckham, the head of LAND Studio, the design firm that collaborated with James Corner Field Operations on Public Square's 2016 redesign. (James Corner helped design the High Line.) "As much as it could be a remarkable destination, it has to feel safe. Well-lit. Eyes on the street.

"Beyond that, it's already 90 percent there," Peckham says.

Even so, it could take time. New York's High Line, which repurposed a 1.5-mile rail spur in the Chelsea neighborhood, took roughly a decade, and $150 million, to come to completion of its first phase. (Its third phase finished in 2014.)

Today, academics and urbanist consortiums debate on the lasting legacy of the High Line. Although its pebble-dashed walkways see 8 million visitors a year, its grandeur led to property values spiking 35 percent in the surrounding area.

That double-edged sword led Robert Hammond, one of the High Line's visionaries, to sigh at the park's gentrifying effect.

Though Ronayne or Peckham have no guesstimate thus far on what Low Line could cost, both hinted at the project sourcing state and federal dollars, buttressed by "climate-friendly" benefits.

As long as it's not, say, another city Ferris wheel. (An actual idea for the bridge's west end.)

Editor's note: A previous version of this story provided inaccurate information about the original name of Veterans Memorial Bridge. We regret the error.