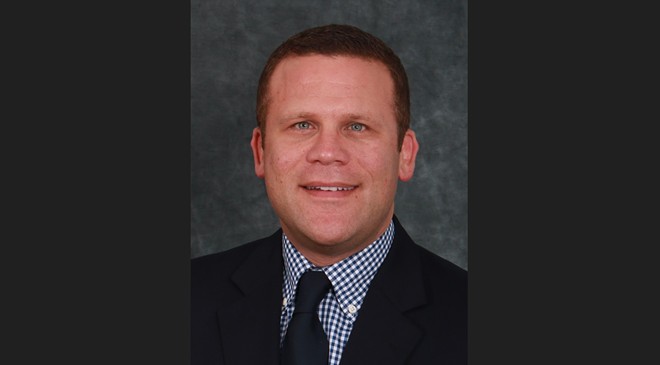 Photo from the Ohio Medical Board.
Michael Gonidakis.

Ohio Gov. Mike DeWine plans to re-appoint a longtime anti-abortion lobbyist and COVID-19 skeptic to the Ohio Medical Board, a spokesman said Monday.

Michael Gonidakis, 48, a lawyer and president of Ohio Right to Life, will serve his third five-year term on the board, which is charged with licensing and disciplining physicians and other health care providers.

“I’m honored that the governor has confidence in me to serve,” he said in an interview. “I think there’s no greater service than public service, and I encourage everybody to find a board or commission or way to give back to the state of Ohio.”

Abortion rights advocates have criticized Gonidakis’ appointment in the past, claiming his anti-abortion lobbying intractably clashes with his state responsibilities. More recently, the U.S. Supreme Court’s overturning of Roe v. Wade in June allowed a new abortion restriction in Ohio to take effect that gives enforcement authority to the state medical board.

Ohio’s new abortion law, enacted hours after Roe’s demise, prohibits the procedure starting at about six weeks after a woman’s last period, with narrow exceptions to save the life of the mother. This exemption requires physicians to document their beliefs in writing regarding a woman’s medical emergency and report it to the Ohio Department of Health. The Ohio Medical Board can revoke or suspend a physician’s license for noncompliance, or order the state attorney general to initiate a case seeking up to a $20,000 fine.

Gonidakis sits on the medical board as one of three members who “shall represent the interests of consumers,” per state law. At least two of those members “shall not be a member of, or associated with, a health care provider or profession.”

Besides his anti-abortion advocacy, state lobbying records show Gonidakis has registered to lobby for an array of health care clients before state lawmakers and the executive branch during his time on the board.

A spokeswoman for the state medical board declined to answer whether Gonidakis is complying with the requirements of the consumer representative board seat, only noting that the governor appoints members of the board.

“With respect to abortion or marijuana, neither of these have been an issue related to Mr. Gonidakis’ service in his first two terms,” he said. “We trust they will not be an issue in his third term either, as the vast majority, if not almost all, of medical licensure issues are unrelated to abortion or medical marijuana.”

He added the sentiment applies to Gonidakis’ other lobbying clients’ industries as well.

Gonidakis said he recuses himself on issues relating to abortion and medical marijuana when they come up before the Medical Board. He said he believes he’s following the statute, given his clients likely don’t qualify as a “health care provider.”

A review of Gonidakis’ comments on social media about COVID-19 show a pattern of skepticism around lockdowns, masks, closing schools, efficacy of vaccines, and vaccination policies.

“If this is accurate (and I do not believe it is), then there is absolutely no reason to get the vaccine … There is just no justifiable reason whatsoever,” he said.


If this is accurate (and I do not believe it is), then there is absolutely no reason to get the vaccine .... there is no justifiable reason whatsoever. https://t.co/HK9hPevxe6


Around that same time, he shared an article citing a study suggesting hydroxychloroquine could help COVID-19 patients. The drug grew in popularity following praise from former President Donald Trump, despite multiple, large-scale, double-blind studies finding no benefit in treating COVID-19 and possible risk to patients.

“Wonder how many Americans had to die because politicians and the media hated Trump so much & just rejected this drug because Trump promoted it???” he said.


Wonder how many Americans had to die because politicians and the media hated Trump so much & just rejected this drug because Trump promoted it??? .... Some NJ COVID patients benefit from hydroxychloroquine, study shows https://t.co/RAE7FoxVfg

He said in an interview he’s not an “anti-vaxxer” and that he and his family are all vaccinated against COVID-19. He noted the Medical Board doesn’t create policy — it abides by state law. Of his tweets, he said he doesn’t retract any of his comments, but noted they come in his personal capacity and not as a member of the medical board.

“Any Ohioan can be vaccinated and want to protect the health of their family but also question some of the politicians’ decisions that are being made,” he said. “At the medical board, we license and regulate doctors. We don’t set policy as it relates to pandemics.”