A West Sixth nightclub is put out of its misery. 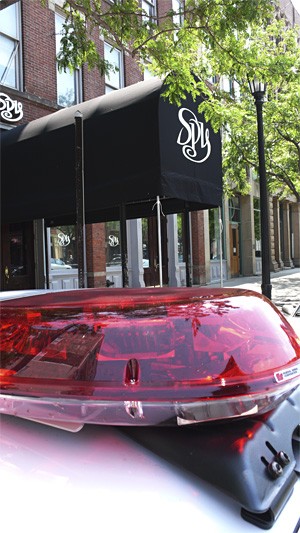 The once-chic Spy Bar is no more. Since opening in '97, the Warehouse District nightclub established itself as one of Cleveland's swankiest spots and strongest celebrity magnets. Its VIP room hosted A-listers like Michael Jackson, Michael Jordan, Prince, and even that magician who's married to that hot chick. "David Copperfield was the nicest man," says owner Raj Singh, remembering the glory days.

But the days of spilling Jäger with top illusionists are over. Following a July 4 shooting, City Council, in a rare moment of initiative led by Joe Cimperman, launched a drawn-out battle to revoke Spy's liquor license. Since then its reputation went from bourgeois to ghetto. Singh says business had fallen by 95 percent.

He plans to remodel and rename the club. No word on what that name will be, but its logo is expected to be a crude rendering of Calvin urinating on a "Cimperman for Congress" yard sign.

In other words, he's still after Singh's liquor license. The final hearing is scheduled for January 15, and Spy lawyer Subodh Chandra — who maintains that Cimperman's crusade is mere grandstanding — promises the club will wage an equally vigorous fight.

"We have some stuff planned that will blow you away," says Chandra. His exhibits may include a photo of a witness for the city taking snapshots up a woman's skirt.

No matter how this turns out, expect it to be weirdly amusing for the fans watching at home.

Original Thief
Last week, Punch brought word of Jim Brown's new company, OG Nation, which is marketing such fabulous new products as Thug Snack potato chips and Party Dogg Malt Liquor. But if Brown is posing as an "original gangster," he may want to get some authenticity counseling from a Bainbridge man, who's surely an original thief.

At a Giant Eagle recently, store security watched a middle-aged man surreptitiously stuff $125 worth of beef tenderloin down his pants, thus taking the wonderjock concept to a whole new level. When the man was stopped, he removed the meat from his pants, but insisted he wasn't trying to steal it.

His boldly original excuse: He was simply carrying the meat in his pants so his hands were free for further shopping.

"That completely makes sense to me," deadpans Bainbridge Police Chief Jim Jimison. But while he gives the man props for an inventive defense, he's deducting points for the tenderloin. The truly professional thief, argues Jimison, would have gone for the T-bone.

Revenge of the Bar
While you were sitting on the couch during Week 17 of the NFL season, watching the Patriots finish out an undefeated regular season with a win over the New York Giants, a bar owner in Sandusky was seething.

Christopher Biechele, who owns Cheers Sports Bar & Grill, watched in agony as business tanked that day. He subscribes to the NFL Network, which aired the game. Since the NFL is locked in a death match with large cable operators, who refuse to carry the channel in their basic lineup ["Sympathy for the Devils," October 31], Biechele's semi-exclusive broadcasts have been a draw for customers.

Some 50 to 60 people showed up to watch the Green Bay-Dallas game in November. He was hoping the Patriots would draw a similar crowd. But that's when U.S. Senators John Kerry, Arlen Specter, and Patrick Leahy darkened his door.

In a righteous defense of the People's Right to Watch Free Football, the senators lobbied the NFL to make the game available on broadcast TV. So the league, not too keen on the prospect of Senate hearings examining its monopolistic pursuits, quickly acquiesced to simulcasts on NBC and CBS.

Nationwide, football fans rejoiced. The women who love them, meanwhile, were left to wonder why the senators can't show the same urgency in strong-arming, say, the pharmaceutical industry.

And Biechele wasn't pleased at all. The decision was announced just a few days before the game, after he had already paid his $152 fee to DirecTV. So he did what any red-blooded American would do: He filed a class-action suit against the satellite company on behalf of all business owners who were screwed in the deal.

"Why should I pay for something that everybody else got for free?" he asks.

Besides, if there's anything more American than football, it's litigation.