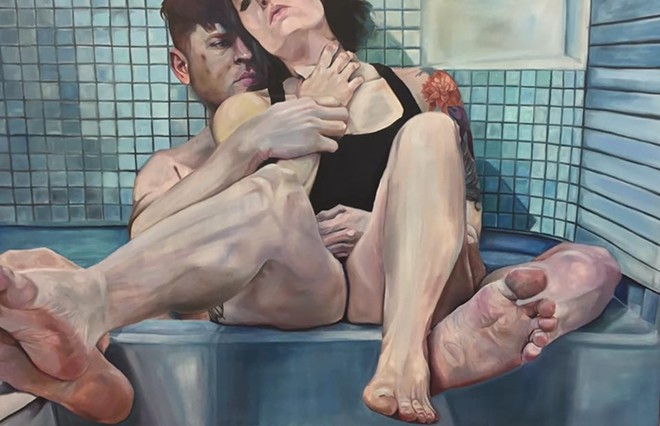 Organizing a one-night-only, pop-up exhibition is a complex art in itself, as any curator can attest. Artists will commit and then back out. Usually the venue is non-traditional and can fall through at any moment due to a myriad of circumstances, and God forbid there are no toilets. Fortunately, the organizers for Freshly Squeezed and Marilyn Death Fest were able to pull everything together along a cast of emerging and established artists for their ventures.

Organizer Madison Asher explains Freshly Squeezed: “We are a group of emerging artists trying to find our place in the art world. Individually, we are still trying to figure it all out. The art world is extremely competitive and hard to break into, I wanted to give myself and others the chance to make our mark. We have all graduated in the past two years, earning a bachelor's degree in an art form. I hope people will appreciate the atmosphere we have created.”

Freshly Squeezed: A Group Art Show will be open on Saturday, August 5th from 6-9pm at 4920 Commerce Parkway, Warrensville Heights, Ohio 44128. More information can be found on their Facebook event page or via email at [email protected]


Marilyn Death Fest organizer and veteran artist, MCXIII recalls the first group exhibition in 2012. “It was birthed as a haunted art exhibit and grew more and more elaborate. I had gathered nearly forty artists, nine bands of varying genres, burlesque & boylesque, and SFX film artists to help design the decor & installations. The original idea for MDF was to be held at a defunct, century old funeral parlor in East Cleveland. It was a monolithic task trying to clean and renovate the abandoned building. Ultimately, just like the building itself, we had to abandon that venue due to utility issues. I was heartbroken. So many wonderful artists had work that needed to have their unveiling regardless, so I found another venue downtown to take us in just weeks prior to our show date. Ever try moving an entire event last minute? It isn't easy, but again, there were so many artists and volunteers that had helped for nearly a year prior that I had to do it. I wanted to do it. I love that Cleveland has such a diversity of talent and this community of involvement. And yeah, here we are 5 years later. MDF laid In Moratorium long enough.”

MCXIII has just opened Generic.Gallery on Lakeside Avenue in Midtown Cleveland where Marilyn Death Fest will he held. “Ironically, Marilyn herself did not fascinate me. Celebrity death and how our culture recycles our icons and ideologies intrigues me.” The famed actress died on August 5, 1962. “The majority of artists involved then & now are not Monroe fans, but they aren't supposed to be. The theme is meant to challenge us. It challenged myself as I built the event around someone that I wasn't a fan of.”

With the opening of Generic.Gallery, MCXIII promises some fun and meaty material. “I have already set up exhibits for the remainder of 2017, including the 3rd version of Dreadful Things in October; Alien: Communion in November that explores sci-fi, horror, & theology; and Baggage in December, which is a mixed media exhibit using suitcases & luggage to tell stories of what it means to be homeless and/or a refugee. For 2018, we hope to have shows once a month when possible. We kick off February with I Choo Choo Choose You, featuring trains and hobo love. Newly booked for June is A Grrrl for All Seasons: Cool Riders & T-Boids, which pays homage to the greatest American musical ever...Grease 2.”