Generosity comes with a steep price in St. Hyacinth. 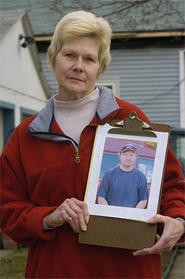 Walter Novak
After a houseguest beat and robbed Gary Scofinsky, his mom, Linda, moved to Cleveland to care for him.
On the bulletin board of room 826 in MetroHealth's brain-injury ward, there's a candid snapshot of the man who occupies the room -- a reminder of what he used to look like and a pixilated goal for the future.

The guy in the picture is 218 pounds of fun. He has round jowls, a floppy blond ponytail, and a smile that could defrost a ribeye. The guy in the room -- the guy wearing the helmet and pushing himself around in a wheelchair -- has sharp cheekbones that form parentheses around worried blue eyes. His head is shaved, scarred, and caved in on the right side. The smile has dimmed. He's 133 pounds of . . . well, he's not quite sure.

For 10 years, home was a corner house on the outskirts of Slavic Village, in a neighborhood they call St. Hyacinth. Gary, now 39, came to Cleveland in his early 20s, chasing friends from his native Youngstown. He found work at the local grocery and scraped enough cash together to buy his house.

The neighborhood, a stretch of tattered colonials near East 55th, was already falling apart. Tucked among plants and factories, it once was a working-class enclave. But over the years, much of the work moved out, and many of the working class followed.

They didn't leave much behind. The neighborhood's dotted with abandoned houses, which thieves routinely strip of siding and plumbing. A guy was recently carjacked in a friend's backyard. A pizza boy was robbed at gunpoint. The infamous Goonies gang -- the kids who terrorized Slavic Village -- spent much of their time in St. Hyacinth.

People deal in their own way. Some pick up and leave. Some stick around, provincially stubborn or financially shackled. "I don't want to be forced out," says Kathy McDonald, who rents a tiny two-bedroom with her husband. "I want to stand my ground. I could afford to move. But I choose not to."

Her husband, Dave, whose long black hair and weathered skin pay homage to his Cherokee blood, is just as immovable. He keeps his Old West-style .44 "closer than I keep my wife" and occasionally fires at bandits, he brags. Or he just takes the tomahawk off his living-room wall, heads outside, and chucks it at the trees. "You get a little crazy, and they don't mess with you," he says.

If Dave is St. Hyacinth's muscle, Gary was its watchful eye and green thumb. Neighbors say he constantly picked up trash, mowed weeds, swept sidewalks. Need a ride to the store? Call Gary. Need someone to watch your house while you're gone? Ask Gary.

"He's willing to do anything and help anybody," says neighbor Rose Lyke.

Andy Gonzalez, commander of the Cleveland Police's third district, won't talk specifics, but he says Gary has helped the cops many times. "He's busting people constantly," Dave says. Gary was also an outspoken leader at community police meetings. He "wants to see his neighborhood get better," Gonzalez says, even if everyone else knows it's hopeless.

But in January, Gary extended his hand in the wrong direction. An acquaintance had been kicked out by his girlfriend and needed a place to stay. Gary opened his home, cooked the guy meals, let him crash on the couch.

On the afternoon of January 3, Gary, who loads trucks for UPS, headed upstairs for his prework nap. Several minutes later he awoke on the floor, woozy and disoriented. The first blow had knocked him out. The subsequent ones smashed in the right side of his skull.

He felt his head: blood everywhere. His new roommate, standing above him, asked him where he kept his cash. Gary told him.

He reached for a phone on the nightstand. Pulled it down. Dialed 911. In and out of consciousness he went. Another blow to the head. And another. And--

"The next thing I knew, I was in the hospital."

Medics found him semiconscious on the floor. "If he hadn't been able to reach the phone," says his mom, Linda, "he never would have made it out of his house." At MetroHealth, he went straight into four hours of brain surgery.

Police followed a trail of blood toward the side door. They walked upstairs, into Gary's bedroom. It was ransacked. There was blood splattered on the floor, bed, mirror, and walls. They found a busted ceramic pillar. They also found a hammer. It too was covered in blood.

Gary spent the next four weeks in intensive care, chasing off infections, blood clots, and pneumonia. He started building back his short-term memory and working back the feeling in his left side. He's finally able to eat on his own, even if it's just liquids. He's finally gaining weight; only 85 more pounds until he catches the guy smiling at him from the bulletin board.

Gary knew the culprit's name and where he worked, so between visits to the hospital, neighbors plastered "wanted" posters throughout St. Hyacinth. Finally, 41-year-old Angelo Vaughn turned himself in. Prosecutors have charged him with attempted murder, felonious assault, and aggravated robbery.

None of these is the most serious charge Vaughn has faced. Gary's new friend, it turns out, was convicted of murder in 1985. He served 20 years at Marion before being released in 2005.

"If you're kind to others, they'll be kind to you," Gary likes to say. "Sometimes it doesn't work out."

Gary's mom drove in from Indiana to take over his life. Pay bills. Coordinate therapy. Keep up the house. She's hoping to get him out of Cleveland soon. She wants him to move to Indiana, near her. He's interviewed for jobs out there. But he's never wanted to leave St. Hyacinth. Not until now.

"It's just not safe here anymore," he says.

At his little corner house, there's a For Sale sign in the window.