Here's Who The Plain Dealer Laid Off Today 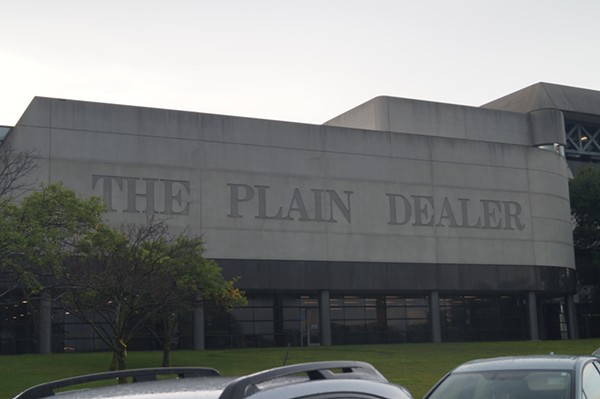 Sam Allard / Scene
Among the 14 veteran journalists laid off Monday from the Plain Dealer are the following:

Joanna Connors, first hired by the paper in 1983, who has served as a feature writer, book and film critic. Her series on sexual assault: "Beyond Rape: A Survivor's Journey" became the basis for her recent book, I Will Find You.

Debbi Snook, first hired in 1983, who has for 20 years written reviews on the food team. She has also written a number of marquee special reports, including a piece in 2012 called "Ohio's Trail of Tears" about how Native Americans were forced out of Ohio.

Michael Sangiacomo, first hired in 1989, who has covered a broad range of topics for the paper and has written recently with compassion and depth about the U.S. border, including a standalone special section in February.

Dennis Manoloff, first hired in 1990, who has covered multiple beats on the sports desk, including collegiate athletics and golf.

My time at @ThePlainDealer has ended. Since Day 1 on Aug. 20, 1990, I worked as hard as I could and was blessed with uninterrupted employment at a great paper, doing what I enjoyed. My colleagues and bosses were/are fantastic. I am @ThePlainDealer for life.


Allison Dolin Carey, first hired in 1993, who has been for several years the heart and soul of the popular weekly Fashion Flash feature.

Janet Cho, first hired in 1999, who has been a premier reporter on the business desk for years.

On Friday, I turned in what I’ve now learned was my final byline for The Plain Dealer. I’m beyond grateful for 20 years of people trusting me to tell their stories - and for the privilege of working with exceptionally talented, salt-of-the-earth journalists in the @PDNewsGuild 📝


The Plain Dealer laid off photographer Chuck Crow. For five years, readers benefitted from his experienced eye and grace under deadline pressure. As a designer and editor, I was honored to work him for 5 years. Contrary to the joy captured in the these images, I am devastated ... pic.twitter.com/P2wzURvbDz


Tom Feran, 37-year-veteran reporter. Feran literally reported on the PD layoffs after he'd been laid off, reportedly among those who volunteered.


Elton Alexander, longtime collegiate athletics reporter, who's been working his butt off covering the NCAA tourney, and who signed off Tuesday with a Kenny Loggins jam.


Signing off with Kenny Loggins ... Plain Dealer career has come to a bittersweet end. Loved every minute of it, save for a few leatherheads. Thank you all!!!https://t.co/pZfPWix8IB


We'll update as we learn more.

The News Guild announced Monday that at least some of the 14 journalists volunteered to be laid off in order to preserve jobs for their colleagues and said that one additional reporter would depart later in April. Today's newsroom layoffs are in addition to 29 production jobs (2o of which were union positions) that will soon be outsourced, which means a net loss, for the Guild, of 35 members.

“[Advance Publications] will tell you this shedding of jobs is to save money while continuing to serve the region in an ever-changing media landscape,” the Guild wrote. “Here are the facts: Two decades ago, the paper had a staff of 340 journalists to cover Northeast Ohio. Soon, there will be 32. The damage isn’t just the loss of jobs. It’s the loss of information vital to the life of the city.”

The Guild noted that the newspaper lost more than 475 years of institutional knowledge in a single day.

On Friday, the Guild ratified a contract that extends to February, 2021, and provides an option for health care benefits to those who have been laid off while eliminating required furlough days for union workers.