How 11 Cleveland Neighborhoods Got Their Names


OHIO CITY — Originally, and just as self-explanatory, the “City of Ohio" was founded in 1818 and served briefly as a municipality in the 1830s before being annexed to Cleveland in 1854. The still-bustling neighborhood, now home to more than 9,000 residents, is probably best-known for the West Side Market, which opened in 1912. During the 1960s and 1970s, the Ohio City Redevelopment Association put $30 million toward improving the 4.5-square-mile area, and it paid off; the neighborhood remains a shopping and dining hub in the city.

TREMONT — This neighborhood cycled through several different monikers before it got its current name. Initially home to Cleveland University in the mid-1800s, the neighborhood went by University Heights — hence its street names (Professor Avenue, Literary Road, etc.). After the Civil War, during which the area hosted two Union Army camps, it paid homage to Uncle Abe and went by Lincoln Heights. Its current title is derived from Tremont School, established in 1910, though you can still find evidence of its past in its academically oriented street names and grassy Lincoln Park.

DETROIT-SHOREWAY — Also relatively self-explanatory, the Detroit-Shoreway neighborhood got its name from Detroit Avenue. The area thrived in the 19th and 20th centuries from the construction of nearby railroad stations and manufacturing plants, after being officially drawn into the city of Cleveland. Like many Cleveland neighborhoods, the rapidly developing area was first inhabited by Irish and German immigrants, and later by Italians and other Europeans. Just as it does today, Detroit-Shoreway acted as a gateway from downtown Cleveland to other west side spots beyond it.

BUCKEYE-SHAKER — Originally an extension of Little Hungary in the early 1900s, Buckeye-Shaker now encompasses several small neighborhoods, most notably Shaker Square. In 1920, the construction of the Cleveland Interurban Railroad (the stirrings of what we call the Rapid Transit System today) provided the area with much-needed transportation, but split its neighborhoods, including Buckeye and Shaker, in half. Shaker Square, sitting northeast in the area and built in 1929, claims the title of second-oldest planned shopping district in the country, and now Buckeye-Shaker is known for hosting Porchfest in Larchmere and the annual Cleveland Garlic Festival in Shaker Square (which you can attend later this month). 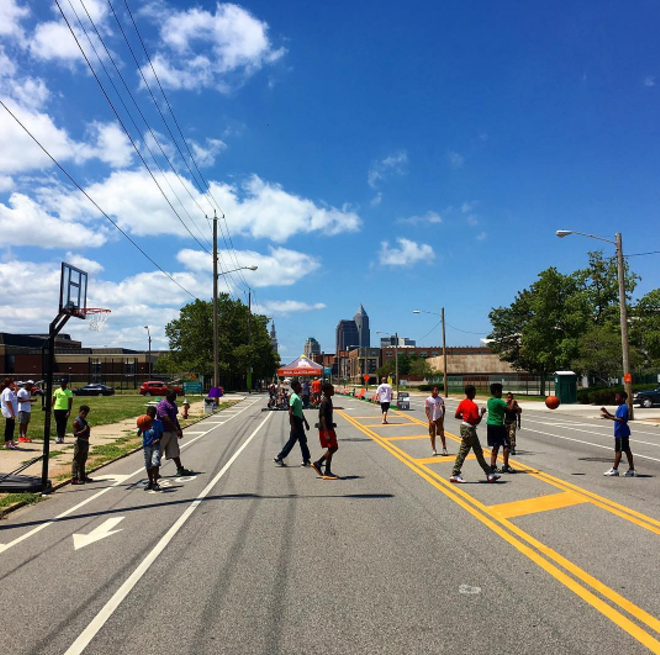 CENTRAL — Like many Cleveland neighborhoods, this one got its name from a street — in this case, Central Avenue. It was annexed by Cleveland in 1873 and boasted both large African-American and Jewish populations by the early 20th century. Langston Hughes, who would rise to prominence in the next decade as a writer, attended the neighborhood's own Central High in the 1910s. He deemed it "nearly an entirely foreign-born school" (his best friend was Polish).

COLLINWOOD — This northeast neighborhood situated about seven miles from Public Square was originally called Collamer (for President Zachary Taylor's postmaster general Jacob Collamer, though neither are from Ohio). Formerly known for a horrific school fire in 1908, and fraught with racial tensions in the 1950s through the 1970s, Collinwood has most recently been growing from the development of arts in the area. Immediately following the founding of Arts Collinwood in 2003, the neighborhood saw 11 new arts-oriented businesses open, and now serves as a haven for artists and musicians.

FAIRFAX — This neighborhood can thank former resident Florence Bundy Fairfax for its name. Fairfax, who served the Cleveland community through its Recreation Department, worked as a swimming class teacher, the first African-American Supervisor of Summer Playgrounds and ultimately Recreation Supervisor and Superintendent (she did all this after earning a chemistry degree from Mather College for Women at Western Reserve University). Initially only a recreation center was named in Fairfax's honor, but soon after, the area became its own neighborhood.

GLENVILLE — Formerly a village, Cleveland annexed Glenville in June 1905, and the neighborhood got its name from its idyllic surroundings. It's drawn attention for varying reasons over the years; first the Glenville Racetrack's construction in 1870, the Cleveland Golf Club in 1895, then much later, riots and a shootout in 1968 sparked by racial tensions. A decade later, the Glenville Development Corporation was put together and still stands as a non-profit, working to make the neighborhood "a safe, self-supporting community in which anyone would be proud to live and raise a family."

HOUGH — This area also derives its name from former residents; in this case, Oliver and Eliza Hough. While the neighborhood thrived before World War I as primarily farmland, afterwards many of its residents dispersed to the surrounding suburbs. After a period of widespread unemployment for its residents, terrible landlords and racial tension, in July 1966 riots broke out in Hough. They lasted a week, but saw four people die and left the neighborhood in a state of decline. However, since the 1980s, the area has been steadily improving, thanks to new housing developments and the work of the late city councilwoman Fannie Lewis.

WEST PARK — West Park dates back to the mid-19th century. While it's on the west side, the area got its name from resident John West, who owned property there on Lorain Avenue. It now comprises four neighborhoods with varying diversity and incomes: Warren-Munn, Riverside, Jefferson and Puritas-Bellaire-Longmead. Lorain Avenue was formerly a wooden toll road, and Kamm's Corners merely a grocery store operated by Oswald Kamm. West Park was officially annexed in 1923.

OLD BROOKLYN — Nestled between Brookside Park, the Cuyahoga River and Brookpark and Ridge Roads, this neighborhood was originally part of farmer-owned land in Brooklyn Township. The area thrived from greenhouse gardening (as of 1887) and public transportation (as of 1869.) Old Brooklyn was annexed by Cleveland in 1905 and gradually expanded to its present-day population of more than 33,000 (plus those inhabiting the Cleveland Metroparks Zoo).