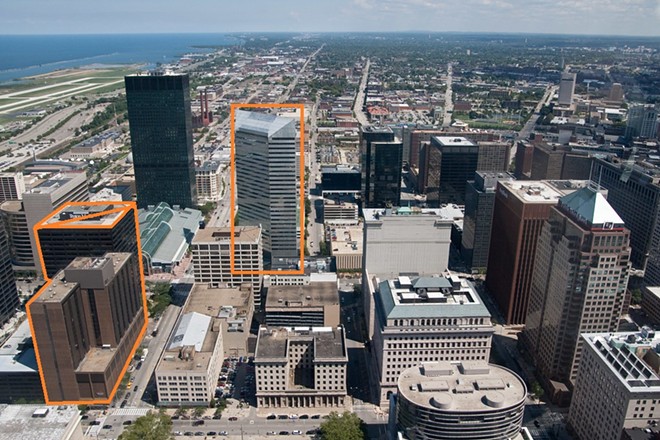 In an explosive legal complaint filed last month in Delaware, attorneys for a major Ukrainian bank alleged that two oligarchs who founded the bank and controlled it from 2006 to 2016 laundered hundreds of millions of dollars in fraudulent corporate loans to purchase assets in the United States and unjustly enrich themselves and their associates.

Dubbed the "Optima Schemes" in the 104-page document, these "brazen fraudulent schemes" were successful, among other things, in making the oligarchs and their co-defendants the largest commercial real estate holders in Cleveland.

(You can read the full complaint here.)

With money siphoned from public bonds and 20 million private Ukrainian citizens who'd opened accounts with PrivatBank, the oligarchs Igor Kolomoisky and Gennadiy Bogolyubov doled out corporate loans to shell companies that they controlled. They used PrivatBank "as their own personal piggy bank," in the words of the complaint.

Those loans were then laundered in multiple digital transactions, sent through dozens of other shell companies that had been created exclusively for the purpose of laundering. These accounts were managed by co-conspirators at PrivatBank's branch in Cyprus.

The true origin of the money thus concealed, funds were then shipped to LLCs in Delaware (hence the legal filing there). Those LLCs — "One Cleveland Center, LLC," to take just one example — were used to acquire properties and metalworking facilities in the U.S. Kolomoisky and Bogolyubov are mineral magnates and own mining factories and metalworking plants in Ukraine.

The men on the ground in the United States, according to the complaint, were a Miami-based trio: Mordechai "Motti" Korf, his brother-in-law Chaim Schochet, and Uriel Laber. These three men managed the "Optima" companies: Optima International, Optima Ventures and Optima Acquisitions, all of which were created and ultimately controlled by Kolomoisky and Bogolyubov.

"Optima Ventures" should be a familiar local name. It was the company, launched in 2007, used to acquire properties in the U.S. for Kolomoisky and Bogolyubov. The majority of these properties were in Cleveland.

Chaim Schochet was Optima's "front man" in Northeast Ohio. He told the Plain Dealer in 2012 that his local goals were twofold: "making money for investors betting on the upside of a Midwestern city, and contributing to the betterment of a downtown that more high-profile buyers ha[d] passed by."

But his investors' funds were ill-gotten, according to the complaint, proceeds from "massive, systematic and fraudulent loan misappropriation and recycling schemes. (In the 2012 PD piece referenced above, Schochet was reportedly "circumspect about discussing how [Optima Ventures] is structured or who the major investors are.")

"On paper, this appeared to be a repayment," the complaint explains. "But in reality, it was a sham and fraud, as PrivatBank was repaying itself and increasing its outstanding liabilities in the process. This process was carried out over and over again, over a period of many years."

In December 2016, the Ukrainian state was forced to nationalize PrivatBank as a result of the oligarchs' conduct. The state injected more than $5.5 billion into the bank to prevent its collapse, and "preserve the stability of the [Ukrainian] financial system." In 2018, the bank reverted to private ownership.

The complaint alleges that Korf, Schochet and Laber were in on the racket, aware of the systematic corruption because they were under direct supervision from Kolomoisky and Bogolyubov (or their trusted lieutenant inside PrivatBank, Timur Novikov), and because they were enriched in the process. Korf, Schochet and Laber received "substantial financial remuneration," according to the complaint, which they used to acquire millions of dollars worth of property in Florida.

Here's an example of exactly how the properties were acquired, via the complaint:

However, the loan proceeds were not used for their stated purposes. Instead, the loan proceeds were combined with funds from other sources linked to [Kolomoisky and Bogolyubov] and laundered in forty-two transactions through fifteen Laundering Accounts, including the accounts of Defendant Kolomoisky’s Divot Enterprises, Ralkon Commercial, and Pavanti Enterpirses, as well as Defendant Bogolyubov’s Bonique, and [K&B's] Blisont Capital and Brotstone accounts.

On information and belief, [K&B] and their co-conspirators used Pavanti Enterprises to misappropriate and transfer a combined $36.1 million into the U.S. to the Multi-State Title Agency Ltd. to fund the acquisition of One Cleveland [Center] through Optima One Cleveland Center LLC for Optima Ventures.


At its height, Optima Ventures controlled 2.8 million square feet of downtown Cleveland commercial real estate. This was a larger footprint than even Forest City Enterprises at the time.

In recent years, Optima has been selling off its Cleveland properties, most of which have fallen into disrepair and suffer from high vacancy rates.

The AECOM building, for example, which Optima acquired in $46.5 million in 2010, was sold to New-Jersey based Rugy Realty last summer for $38 million. When Optima bought AECOM (the former Penton Media Building), it was 90-percent occupied. But when Rugby purchased it last year, it had dropped to only 57-percent occupancy and was in need of significant renovations.

"We'll fully renovate the lobby so it fits the 21st century and doesn't look like the 1980s," Rugby principal Robert Ades said at the time of purchase. Rugby's plans also included updating the elevators, the mechanical components of which reportedly dated back to 1972.

The Huntington Building (The 925 Building) was sold to Frank Sinito's Millennia Companies last year for $40 million. A full overhaul of the building was projected to cost $300 million. The property was characterized by the PD at the time of sale as a "gaping hole in the heart of a revitalizing downtown."

A situation of disrepair and vacancy can also be found at 55 Public Square, the only building other than One Cleveland Center that remains in Optima's local ownership portfolio.

A sale was in the works with K&D development last year, but K&D pulled out, calling the project "unworkable." Though Optima had purchased it for $34 million in 2008, it was appraised for only about $20 million last year. The Plain Dealer reported that the building was "in dire need of a makeover" and that "only a smattering" of businesses occupied the 2nd through 11th floors of the 22-story structure. The John Q Steakhouse space on the ground floor has been vacant for years.

Scene spoke with a representative there by phone, who asked that questions for Chaim Schochet about the so-called "Optima Schemes" be submitted via email. Shochet provided the following via Optima Management Group late Tuesday afternoon:


The allegations in this lawsuit – part of an orchestrated political attack by a Ukrainian bank against investors in our thriving businesses – are false, defamatory and utterly without merit. We intend not only to contest but to disprove these reckless allegations, and to demonstrate that they are part of a smear campaign driven by a Ukrainian political agenda that we have nothing to do with. We are immensely proud of our extensive track record building a vibrant real estate portfolio in Cleveland, and we will not let a frivolous lawsuit tarnish our hard-earned reputation or distract us from our mission to continue to serve the interests of the Cleveland community.

Filed on behalf of the current PrivatBank shareholders, the Delaware complaint seeks damages which could include all of Optima's U.S. assets. Those include properties in Dallas and Louisville and metallurgical assets in addition to the Cleveland portfolio. Among the metallurgical assets that Optima Acquisitions acquired was a steelmaking plant in Warren, Ohio, called Warren Steel Holdings LLC. Warren Steel shuttered permanently in 2016 and laid off 162 workers due to "unforeseeable business circumstances."

Kolomoisky and Bogolyubov are now back in Ukraine after having fled from their residences in Switzerland to Israel in 2018. Both oligarchs reportedly have Ukrainian, Israeli and Cypriot citizenship.

The Daily Beast reported in April that Kolomoisky is under FBI investigation and that the U.S. Attorney's Office in the Northern District of Ohio was involved in a wide-ranging probe. Kolomoisky's lawyer said that his client "categorically denied" laundering any money into the United States.

Kolomoisky has reportedly returned to Ukraine, however, with the tacit protection of new president Volodymyr Zelenskiy, a comedian who played the Ukrainian President on the TV show Servant of the People (now streaming on Netflix).

That show, immensely popular in Ukraine, aired on a network owned by Kolomoisky.

*This article has been updated with a comment from Chaim Schochet.