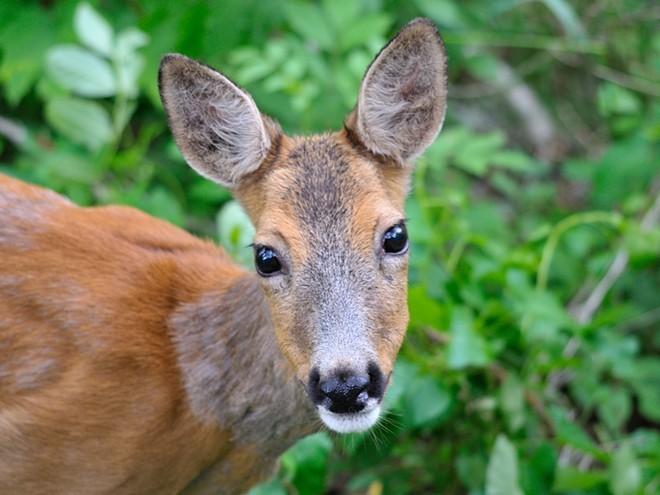 thriol / Flickr
Cute and deadly, Ohio deer are in mating season and causing a problem for motorists.

If you're seeing more deer along the roadways right now, that's because it's the height of mating season. And the deer are getting frisky.

Deer especially like to flirt and date at dawn and dusk. Due to our blessed return to standard time, those hours are now also times when people are more likely to be moving around. Today, dawn was at 7 a.m. and dusk will be at 5:29 p.m., right during rush hour.

More traffic and more deer? It's a deadly combination for humans and deer alike.

Most people react as you should expect and when they see deer on the roadway — they swerve, brake or take other action to avoid hitting the animal. This instinct, the Ohio State Highway Patrol says, is a mistake.

"You have the potential to lose control or hit another vehicle," Lt. Leo Shirkey told the Independent. "I know you don't want to hit it but it's the best thing to do."

This may seem like a nonviable option as well. There have been 101,912 deer-related crashes in Ohio since 2017 and 31 fatalities amongst those crashes. But officials caution, most of those involve drivers getting into accidents while avoiding the deer, or trying to.

Ohio is not an outlier, if you were curious. The same advice is being given across the country.

"If you're driving and you're in a situation where you're at fairly low speeds without much traffic or anything around, and you can avoid the deer, then, yes, if you can do it safely, then try to do so," Dan Zarlenga, St. Louis Regional Media Specialist with the Missouri Department of Conservation, told KSDK. "But if you're at high speeds, there's oncoming traffic, you've got a narrow roadway, whatever, where you might fall off into a ditch or hit a tree, then, unfortunately, the best thing you can do is just go ahead and hit the deer."

So the answer may be to just be cautious by wooded areas, and if you see deer anywhere (even on the side of the road) just know that there are probably others (maybe on the road) and exercise caution.

Plus, the deer population is out of control because there are no natural predators in the area to keep them in check. So perhaps automobiles have to take the place of timberwolves.

Deer mating season will end in November, but increased deer activity (and therefore driver caution) could continue through December.