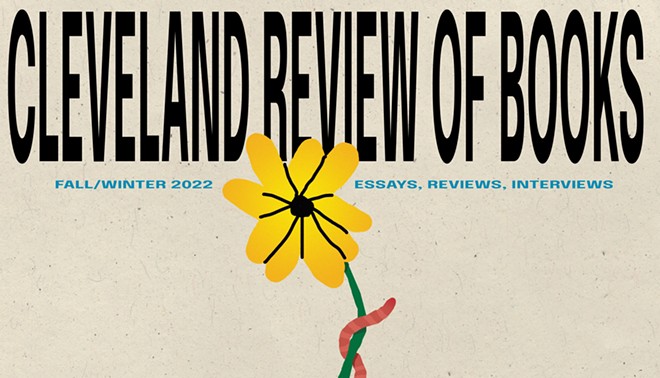 "Why on Earth would you start a literary magazine?" New Yorker writer Stephanie Burt began her famous 2015 essay on the notoriously difficult industry. "You won't get rich, or even very famous."

Billy Lennon, the founder and publisher of the Cleveland Review of Books, believes he's refined his answer four years after the publication's 2018 digital debut. While CRB isn't a lit magazine — it features "literary, cultural and art cricism" — the question itself, broadly speaking, is still one worth asking.

On the eve of the release of CRB's first-ever print issue—stylistically dubbed "Issue 00"—Lennon describes the milestone of his flagship endeavor thusly: Print is for the people.

"We spent a lot time over the past couple of years really defining who we are online,"
click to enlarge 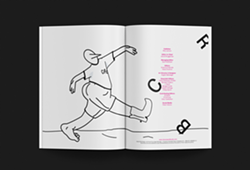 Cleveland Review of Books
The masthead spread from CRB's Issue 00, featuring artwork by Maneage.
Lennon told Scene. "But now, we're trying to do more in the actual community."

Lennon, 29, is one in a group of literary minded Northeast Ohioans who, since 2017, have endeavored in a series of cross collaborations, multi-format poetry readings and alternative theater projects — Kevin Latimer's Grieveland or the now-defunct Starlight Elsewhere series or RA Washington's Guide to Kulchur, a printing house that dissolved in 2019 following massive funding issues and financial loss.

Though Lennon said he sees Washington as a mentor—"We've had long conversations smoking cigarettes at his place"—he's placed more emphasis on an itinerant kind of literary ambassadorship.

After living for most of the pandemic in London (it's where he studied art theory and philosophy), Lennon relocated to New York in 2021 to hang around the circles of the Lit Mag Elite —  the Paris Reviews of the world. His aim was to transfer hard-learned lessons to grow CRB with time-tested ideas. 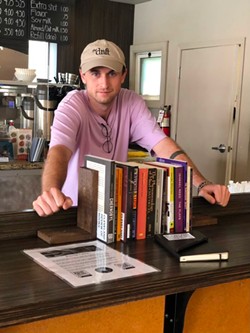 Billy Lennon
Lennon, CRB's founder, at The Loop in Tremont in 2021.
"There's a general sense of isolation if you just, like, stick to the Midwest, and kind of have this general fuck-you attitude towards the coasts," Lennon said. "But you can spend time in the coasts and kind of be a cultural pirate instead."

Lennon's moveable feast seems to have paid off warmly.  CRB's debut print issue, which gathers the "best of the past year's" book reviews, essays and interviews—most with some connection, via writer or subject, to Northeast Ohio—comes off as meticulously crafted. Along with a Lennon-penned essay on John Lurie, readers will find work by Sarah Minor and local journalist legend Roldo Bartimole.

And to truly match the  color found amongst the legacy literati, Lennon tapped into designer Angelo Maneage to allow work by writer Hilary Plum or Chautauqua, N.Y.-based Haitian poet Sony Ton-Aime to pop. It's a modern, digestible design aesthetic that David Byrne might smile at, which both Maneage and designer Anna Donlan had a hand in crafting. (Along with a new website.)

In purely fiscal terms, CRB is basically a labor of love. He said that he, editor-in-chief Zach Peckham and Maneage spent $4,000 on 500 copies, funds that came primarily from private donations. He hopes it has legs: Among the 75 literary magazines that were born during the pandemic, scores of them closed or were badly beaten by the recession cuts, including The Believer and Conjunctions, two literary mainstays.

But Lennon, a quiet presence at poetry readings, maintains a cool demeanor. Along with opening a to-be-named "CRB Space" in Tremont, Lennon is optimistic that a return to a notion of community will infect CRB's new physical presence.

"You know, a lot of magazines [like us] don't really have a tie to a region," Lennon said. "That's what I care about. That's what this is all about. Having that close tie."

Readers can buy CRB's Issue 00 online, or at Mac's Backs and Visible Voice in the coming weeks, along with Casa Magazine in New York City. Readers can use a discount code, "SCENE," to receive $5 off their online order. Also, Lennon and CRB will be hosting a launch party Saturday, December 10th in Tremont at 7:30 p.m. Details can be found here.