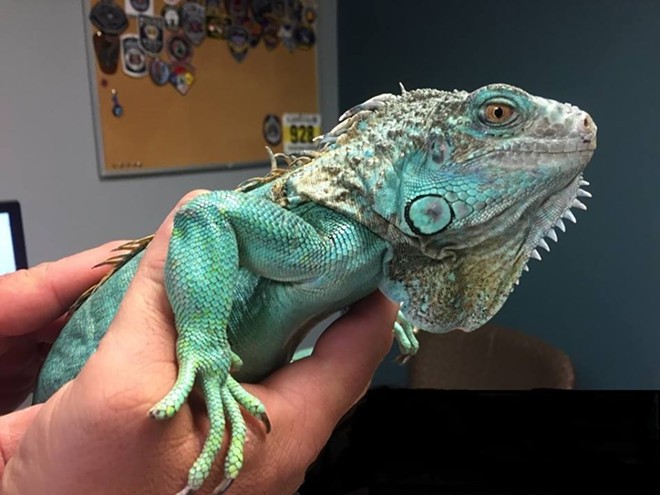 Update: A happy ending to the age-old tale of iguanas used as weapons at local Perkins chain restaurants...

Back in April police responded to the Perkins on Mentor Ave. after a 49-year-old man, during a confrontation with the restaurant's manager, pulled his pet iguana out of his shirt, twirled it around his head, and launched it at the employee.

Poor Cooper, which is the name the police gave the little bruised and battered iguana after the incident, walked away with a broken leg and the man was arrested for disorderly conduct and cruelty to animals.

Well, the Lake Humane Society, based out of Mentor, heard from a woman in June who said Cooper was actually her iguana and had escaped back in the summer of 2018. Using photos and records, the good folks were able to corroborate her claims and Cooper will be reunited with her rightful owner later this week.

“The organization was thrilled to have Copper’s owner come forward in order to reunite her with her family,” the Lake Humane Society told Fox 8.

(Original story 4/17/19): The lunch rush at a Painesville Perkins Restaurant (700 Mentor Ave.) grew positively wild yesterday when police were called to the scene for an incident involving a disgruntled customer and his spiky pet

It's unclear what exactly got the diner in such a confrontational mood, but whatever set him off caused the unnamed 49-year-old to unleash an iguana from under his shirt, swing it around by the tail like a lasso and toss it directly at the Perkins manager on duty, Painesville police report.

The suspect did flee the scene, but police were able to catch up with him shortly after.

The iguana, which police have dubbed Copper, is now safe with the Lake County Humane Society, and a veterinarian has assessed the extent of the reptile's injuries.

Meanwhile, the suspect was charged with disorderly conduct, resisting arrest and animal cruelty.Sign up for Scene's weekly newsletters to get the latest on Cleveland news, things to do and places to eat delivered right to your inbox.