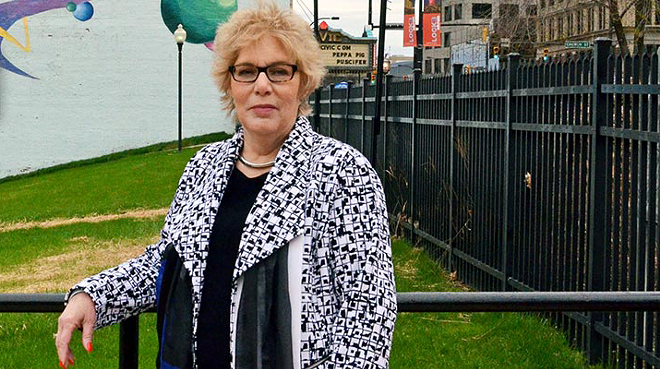 Courtesy of Beverly 4 Congress
Beverly Goldstein, the openly racist and transphobic Republican candidate for Ohio's District 11 seat, is continuing to racially discriminate against the very district she's trying to represent.

Don't be fooled by her continued posts of posing with POC McDonald's workers for her daily mocha frappe, Goldstein believes that the black community in District 11 are illiterate and wants to rid the district of what she calls "hoods."

In her newest sponsored Instagram ad, a poorly photoshopped image of a young black man named Cavell is half-way cropped out, and then a selfie of him is shown with what is believed to be his quotes including "I want the hood to look like Bratenhal," and "HOW WILL YOU IMPACT THE HOOD?"

Is it possible that this young man really did want to ask Goldstein how she intends to help underserved communities? Absolutely. Is it super weird that she's now toting his quotes around in a paid ad as an attempt to show that she's "down" with POC? Also, yes.

People called out Goldstein's Instagram ad on Twitter, which she quickly defended by using more of her "I have a black friend" ramblings.


Yes, CAVELL, inner-city Cle resident college student, very impressive young man, overheard our campaign conversation in a cafe. He joined in & shared, from the broken screen of his mobile phone, his frustrations with CMSD & his visionary messages for improved conditions here. https://t.co/Hn5bKHpbXG


Was it necessary to point out that his phone had a broken screen? No. But Goldstein's schtick is trying to paint all POC with the same brush of "impoverished." Also curious is where Cavell actually lives, given the fact "inner-city" doesn't necessarily define a specific location, but is most-commonly used as an euphemism for lower-income residential districts.
If you missed it last time, Goldstein believes that "black illiteracy" is responsible for the passing of the LGBTQ+ protection ordinance in Cuyahoga County. Goldstein claimed that socially conservative African-Americans would have come out to oppose to legislation (that was a county council vote, not a public vote) if they understood the language of the legislation, but in her mind, socially conservative black people don't know how to read. Cleveland's gun violence problem is also directly related to black illiteracy, according to Goldstein, who believes that if black people can't read, they'll turn to criminal activity to make a living. "A lot of gun activity relates to literacy, as far as I am concerned," she told Cleveland.com. "A lot of our problems relate to being unable to get more people into the workforce at a pay level that's sufficient to actually have a life." A fan of Trump's proposed border wall, Goldstein has also gone on record to say that border security workers are justified in separating immigrant children from their families "to ensure they're not trafficking victims."

Goldstein resides in Beachwood, notoriously one of the most progressive areas in the entire state, as well as one that is overwhelmingly white. For someone who doesn't have the lived experiences of a POC, Goldstein is seemingly obsessed with the community and how they live.

This is Goldstein's second run for Congress against incumbent Rep. Marcia Fudge, who previously won a decided victory against her in 2016 by tallying about 80 percent of the vote.