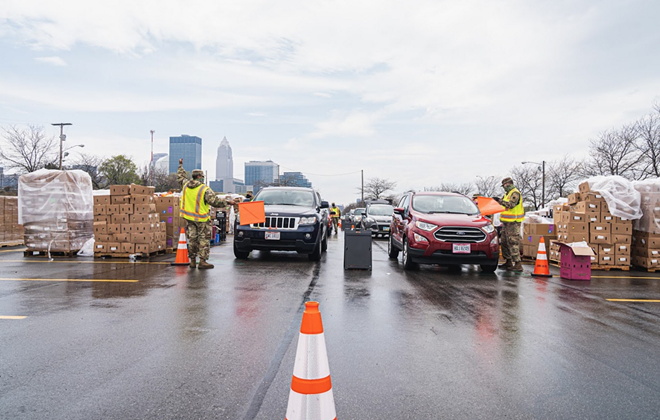 Some food banks are slashing the amounts of food they give people. At the same time, Ohio and many other states are sitting on enormous piles of cash, and a spokesman for Gov. Mike DeWine was vague last week when asked how the governor would like to use that money.

As so often happens to the most vulnerable, today’s inflation and supply disruptions hit the poor a lot harder than everybody else. While many of us dread looking at our 401Ks these days, huge numbers of low-income Ohioans are choosing between paying for housing, utilities, rent, medicine or food, said Lisa Hamler-Fugitt, executive director of the Ohio Association of Foodbanks.

The global food-supply chain is complex and the reasons for shortages and price increases are interrelated. The coronavirus pandemic disrupted economic patterns in ways that are still being felt, while Russian President Vladimir Putin’s invasion of Ukraine disrupted major supplies of energy, grain and fertilizer.

Amid all this, commodities and hardware are stuck in ports and warehouses, while food processors struggle to find packaging and other supplies they need to do their jobs, Hamler-Fugitt said.

Buffeted by all those forces, federal food assistance to the states has plummeted.

Among the features of that storm:

One reason people aren’t getting enough to eat, Hamler-Fugitt said, is that their incomes don’t come close to keeping up with inflation. Since many monthly expenses are fixed, people scrimp on things that aren’t, she said.

“The one area of your budget you can cut is your food budget,” she said.

To meet their most immediate needs, the food banks are asking the state for $50 million. Needs are becoming especially acute now as schools let out for the summer and their breakfast and lunch programs for 1.8 million Ohio kids are ending as well, Hamler-Fugitt said.

“We always struggle to replace those,” she said.

It would seem the state has money to fill growling stomachs.

It has about $500 million in unexpended funds from the first tranche of American Rescue Plan money awarded during the pandemic, and another tranche of more than $800 million is coming.

Meanwhile, Pew States reports that Ohio and other states are sitting on unprecedented cash reserves.

In Ohio, the state’s total balance — “the combination of rainy day fund balances and leftover budget dollars known as ending balances” — has increased 74% since 2019, to $7.4 billion, according to data that accompany the report.

In terms of the number of days the state can operate just on those reserves, Ohio ranks 12th, at 115.8 days, the report said.

Especially after the bruising experience of the Great Recession, it’s understandable that states would want to build a cushion against events that cause revenues to nosedive, or expenses to spike — or both. But at the same time, government has a clear interest in keeping vulnerable populations from going hungry.

“We have received the (food banks’) recommendation as part of many of the (American Recovery Plan) requests we have received,” Tierney said in an email. “This is under review, and no final decision has been made.”

Hamler-Fugitt, who said DeWine has been supportive of the food banks during the pandemic, urged Ohioans to think about what life is like for their neighbors who aren’t making ends meet.

“People are just trying to get through the day in the richest nation on Earth,” she said.